People who live in communities that straddle U.S. 50 — on the Broadneck Peninsula and on Kent Island — complained of being virtual prisoners, unable to leave their neighborhoods from Thursday through Sunday each week.

A proposal to add a third crossing alongside the existing twin spans would bring greater mobility to both “through” traffic and area residents alike, according to Gov. Lawrence J. Hogan Jr. (R) and other supporters of the project.

With the Maryland Transportation Authority — which owns and operates the state’s toll facilities — in the midst of a series of public hearings on the project, Pittman said the Hogan administration hasn’t done enough to justify the enormous expense a third span would bring.

“It’s one of these Hogan transportation projects that probably should be put on hold,” he told Maryland Matters on Tuesday. 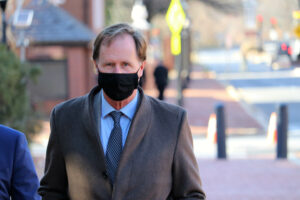 At Hogan’s request, the authority has spent five years and $5 million studying a potential third crossing. After looking at 14 options that ran the length of the Chesapeake Bay, they settled on “Alternative 7” — directly adjacent to the current spans — as their “Preferred Alternative.”

But Pittman and other critics of a third span connecting Sandy Point and Kent Island argue that the Draft Environmental Impact Statement the MdTA released in February relies on data that was compiled before the authority eliminated cash tolls last year.

The removal of toll plazas, the source of notorious backups, has reduced traffic considerably, they say. They also say the rise in telework has implications for the future.

“It’s very significant, but it gets deeper than that,” said Jay Falstad, head of the Queen Anne’s Conservation Association, an environmental group.

“The state is relying on outdated traffic data from 2017 that takes into account one 7-day week in August to justify its claims, completely overlooking the other 51 weeks of the year, and relying on pre-COVID data,” he added.

In its draft environmental report, the MdTA says “there is no definitive traffic model that would predict how the pandemic will affect long-term traffic projections; however, we will continue to track trends in travel behavior and traffic volumes as our communities, businesses, places of worship, and schools begin to reopen, and consider new information as it becomes available.”

In a Maryland Matters commentary in March, MdTA Executive Director James F. Ports Jr. said the state’s infrastructure planning must include development that’s in the pipeline, not just the traffic of today.

John B. Townsend II, head of governmental and public affairs for AAA Mid-Atlantic, applauded the state for choosing Alternative 7, the alignment Hogan once tweeted was the only one he would ever accept.

The Queen Anne’s Board of County Commissioners has not taken a formal position on the project. But Commissioner James J. Moran (R), chair of the Roads Board, said it’s his personal view that the third span represents “the greatest opportunity to get out of gridlock.”

The public comment period on the Draft Environmental Impact Statement runs through May 10.

There are many unanswered questions about the third span — including how the state would pay for a project estimated at between $5.4 billion and $8.9 billion, and whether it would qualify for federal funding.

It’s also unknown how the state would pay for a Tier 2 study, which Moran said would cost around $50 million. A decision on that would probably fall to the next governor.

In the interview, Pittman (who jokingly refers to Hogan’s proposal as “yesterday’s bridge tomorrow”) said that for a fraction of the cost, the state could have moved forward with an inner-city rail line in Baltimore that had qualified for federal funding.

The governor canceled that project in 2015, calling it “a wasteful boondoggle.”

“The Red Line in Baltimore would have real positive benefits for people in communities,” Pittman said. “It’s incredible how expensive [the third span] is.”

The executive said putting a third span next to the existing bridge “only makes sense if it’s part of a sprawl development plan for the Eastern Shore. And the only people I know who really want that are developers who have land over there.”