A week after voting to defer action on three “emergency” contracts, Comptroller Peter V.R. Franchot (D) demanded that the state Department of Health provide information about them by the end of the week.

In a March 30 letter to Acting Secretary Dennis R. Schrader, Franchot sought background on the $14 million in contracts that he and Treasurer Nancy K. Kopp (D) refused to approve at last week’s Board of Public Works meeting.

The pair cited unanswered questions about the scope of work involved in the contracts.

The largest of the three items the board voted to defer was an $11.9 million contract with Ernst & Young to “assist in supporting, assessing, enhancing, and executing Maryland’s COVID-19 Vaccination Plan.”

The panel also sidestepped a $330,000 contract with Berkeley Research Group for a consultant to the COVID-19 Surge Planning Team and a $723,480 contract with KPMG for “resource planning, data analysis, consulting, and project management services with expanded tasks.”

The board is scheduled to meet again on April 7, but Franchot said his office has been notified that the Department of Health does not intend to seek approval for the three contracts at that session.

“Since no reason was given for this delay, I urge the Department to bring back these three emergency contracts and be ready to answer any and all questions from Board members,” Franchot wrote.

The disputed contracts were three of many the agency has entered into using emergency procurement rules made available due to the COVID-19 pandemic.

In addition to seeking more information about them, Franchot asked Schrader to describe “what, if any, logistical and operational plans” the agency formulated in preparation for the arrival of vaccines late last year.

He also asked the acting secretary to explain why nine of the 11 emergency contracts on last week’s BPW agenda arrived outside the 45-day window for notifying BPW of their existence.

Schrader did not attend the March 24 meeting at which the items were deferred. Deputy Secretary Webster Ye defended the contracts in his absence.

The comptroller, a candidate for governor in 2022, requested that Schrader participate on April 7, “as is customary for other cabinet secretaries when presenting contracts for Board approval.”

A Health Department spokesman said on Wednesday that the agency is preparing a response to the comptroller’s letter.

Editor’s note: This story has been updated to add that a spokesman for the state health department said that agency is preparing a response to the state comptroller’s letter. 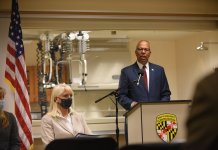 State Police Will Use New Spectrometer to Trace Opioids, as Deaths Ticked Up in First Half of 2021