The Senate passed a bill Wednesday that would decriminalize the possession and distribution of drug paraphernalia — including hypodermic needles and syringes.

“All this bill does is try to keep criminalization away from the people that are using these, [and] to encourage people to use these clean products and to use these programs,” Sen. Jill P. Carter (D-Baltimore City), the bill sponsor, said on the floor.

Senate Bill 420 passed out of the chamber on a vote of 31-16, but not without a fight from Senate Republicans.

Sen. Robert G. Cassilly (R-Harford), who called Carter’s legislation “a big mistake,” argued that the bill will authorize “the manufacture and sale” of “counterfeit … needles and syringes” that people will hoard and sell “on the black market.”

Carter clarified that the bill specifically prohibits the distribution of paraphernalia when circumstances “reasonably indicate” that someone has the intent to use it to manufacture, distribute or dispense a controlled substance. 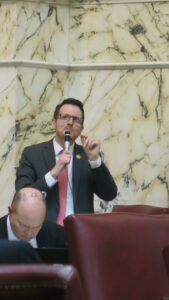 Sen. Justin D. Ready (R-Carroll) said that the legalization of these products is problematic because when the General Assembly voted to decriminalize small amounts of marijuana, it at least included a measure to penalize the use of the drug in public settings.

“This bill wipes away any issue with possessing heroin paraphernalia: needles, syringes, spoons,” Ready said Wednesday. “We should not pass this bill in its current form.”

On Monday evening, Ready attempted to amend the bill by adding a provision that would have made possession of drug paraphernalia a civil offense punishable by a $500 fine, citation and a mandate to appear before a judge.

Ready did concede that there is an argument for decriminalizing the possession of paraphernalia for medical professionals who are handing it out, “but that’s not this bill,” he said.

Carter reminded her colleagues that harm reduction organizations have already been authorized to hand out needles and syringes and that pharmacies are able to distribute them in counties without syringe service programs.

Even so, written testimony submitted on behalf of the Baltimore Harm Reduction Coalition indicated that even registered syringe exchange program facilitators receive citations and harassment from law enforcement and that this legislation would help to minimize that.

Sen. Pamela G. Beidle (D-Anne Arundel) told the chamber that she would be voting in favor of the bill because of the written testimony submitted by MedChi, the Maryland Medical Society.

Written testimony submitted on behalf of the organization said that the decriminalization of drug paraphernalia would not only increase users’ incentive to trust the police and seek treatment but would also “reduce the need” to reuse needles and other items that contribute to the contraction of infectious disease.

“This will have a positive public health impact on the spread of HIV and Hepatitis C,” the testimony reads.

Carter stressed a similar message in her defense of the bill Wednesday:

“This bill really is narrowly tailored to get to this paraphernalia for drug addiction and to enhance public health and public safety,” she said.

The identical bill, sponsored by Del. David Moon (D-Montgomery), passed in the House of Delegates by a 91-39 vote on Saturday.

Maryland lawmakers continue to craft cannabis provisions in preparation for adult use in July.