Almost a year to the day after he imposed a COVID-19 emergency order, Gov. Lawrence J. Hogan Jr. (R) on Tuesday lifted most of the state’s restrictions on economic activity.

The move means capacity limits on restaurants — both indoor and outdoor dining — will be lifted, though patrons must be seated, and tables must be at least six feet apart.

Social clubs also get the all-clear, subject to masking and distancing requirements.

Large facilities — including Camden Yards and other sports venues, race tracks, conference centers, convention halls, concert sites, wedding and banquet spaces, theaters and hotel ballrooms — will be allowed to open at 50% capacity. The masking and distancing requirements that have been a hallmark of the pandemic remain in effect at those facilities.

Patrons may not stand at a crowded bar, Hogan said.

The governor said he was moved to lift restrictions now because the state’s coronavirus metrics have shown sustained improvement and more people each day are getting vaccinated.

“The time is right,” Hogan told reporters at a State House news conference. “We’ve been following a very balanced approach from the beginning of this, from day one, for now more than a year.”

“We get the best advice we can from our health experts and from our business experts, and we believe it’s the right time.”

Mike O’Halloran, head of the Maryland chapter of the National Federation of Independent Businesses, called Hogan’s order “fantastic news for Maryland small businesses [that have] faced the brunt of this economic crisis…”

“Our members hope local leaders in counties like Montgomery and Anne Arundel will follow the lead of Governor Hogan by not pressing continued restrictions on small businesses,” he added. 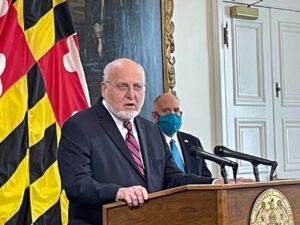 Redfield praised Hogan for pursuing “sensible steps to get more of the economy re-opened in a smart, purposeful way, while keeping in place the powerful mitigation tools that we have to confront COVID-19.”

Hogan said that local governments that wish to retain restrictions on dining or other commerce have the right to do so — but he urged them to follow his lead.

“State law does grant local jurisdictions some powers to take actions that are more restricted than the state is,” he said. “But my advice would be that they should follow the state guidance.”

He said the “patchwork” of local laws has been “very confusing” to the public.

Most local leaders did not immediately respond to requests for comment following Hogan’s announcement. Several said they needed to consult with their health experts.

Baltimore Mayor Brandon M. Scott (D) said his administration would “continue to lean on the direction of healthcare professionals and local data on COVID-19 hospitalizations, deaths, and new cases to shape reopening efforts in Baltimore.”

He said his team would review the new executive order “to determine the best path forward.”

“Unfortunately, we were not informed ahead of time of the Governor’s announcements today,” Howard County Executive Calvin Ball III (D) said in a statement. “We are currently reviewing the revised Executive Order to understand its full implications. We will continue to evaluate our metrics and we remain committed to making data informed and people driven decisions to keep Howard County residents safe.”

“I would like to thank our businesses and residents for continuing to take precautions and helping us make progress in reopening as we continue to advocate for our fair share of vaccines,” he said in a statement.

Several local officials said they were confused by the wording of Hogan’s executive order.

They pointed to one provision of the document that said jurisdictions wishing to maintain restrictions based on health concerns are “hereby authorized to issue orders that are more restrictive than this Order…”.

But the next section of the order said that such authority “shall cease to be effective at 5:00 p.m. on March 12, 2021, at which time all Local Orders issued pursuant to [the paragraph above] shall become null and void.”

In a statement issued shortly after the press conference, Hogan spokesman Mike Ricci said “counties and municipalities have established and used their own emergency powers throughout the pandemic. As the governor stated today, jurisdictions may enact more stringent guidelines based on local authorities. Those authorities are unaffected by today’s order.”

While infection and death rates are falling in much of the country, some health experts have cautioned against re-opening too quickly. Spring weather brings the potential that pandemic-weary Americans will cast aside their masks, triggering a “fourth wave” of infection.

“The virus can mutate. Things can change,” Hogan conceded. But “we believe it’s the right time … And it’s time to get our economy going.”

Under the governor’s order, quarantine requirements following out-of-state travel — widely ignored — are lifted. A travel advisory, warning of the potential dangers in visiting places with high infection rates, will remain in place.

Marylanders who venture out of the state are still encouraged to get tested when they return home.

In addition, the state continues to be in discussion with other jurisdictions about future “mass-vax” locations.

Asked if his order applies to the State House, where the General Assembly is in session through April 12, Hogan said “No.”

Due to the pandemic, legislative leaders have barred the public, including lobbyists, from the State House since March of last year.