A group of volunteers that helps others find COVID-19 vaccine appointments said on Monday it has documented several cases in which people of color have been required to show identification at Maryland pharmacies before they were able to get a shot.

They said no such requests were made of white people. The group, which is made up of Montgomery County teachers, said the state must take steps to protect the public.

The incidents underscore why the Maryland Department of Health must open a mass-vaccination site in the state’s largest and most diverse jurisdiction, the president of the Montgomery County Council said.

The incidents of alleged profiling took place at retail pharmacies under contract to the federal government, members of the group told a press conference organized by Montgomery County Council President Tom Hucker (D).

In the three incidents, including one at a CVS in White Plains, four people — including two Latina clergy — were forced to produce documentation. White customers were not, the group said.

They reached out to members of the Vaccine Hunters/Las Caza Vacunas, who sought assistance from Del. Joseline Peña-Melnyk (D-Prince George’s). She in turn spoke by phone with pharmacy staff.

Eventually, everyone who sought a vaccine received one, but volunteer Tania Perez Fuentes called the process “humiliating.”

“They all did receive their vaccine, but it took an intervention and it took a lot of convincing on the phone,” Perez Fuentes said. Such incidents bring “a lot of concern and fear to the community.”

One woman who was pressed for identification offered to leave the pharmacy, to diffuse the situation, but Perez Fuentes urged her to remain on-site.

“This illustrates the risks the state takes when they provide so many of our limited vaccine doses to for-profit retail providers that don’t have the same commitment to equity that our health department follows in Montgomery County,” Hucker told reporters.

“If just one person has a bad experience, it has a cascading effect, because they then may tell their neighbors and friends — who may already be reluctant to receive the vaccine the first place — and that compounds the problem,” he said.

Peña-Melnyk, who was tapped by Gov. Lawrence J. Hogan Jr. (R) to serve as an “ambassador” in the state’s “GoVax” campaign, said one of the pharmacists hung up on her, though she said she did not identify herself as a legislator.

In light of the incidents, the Vaccine Hunters want the Department of Health to:

Peña-Melnyk raised the issue with D. Robert Enten, a CVS lobbyist. She received a follow-up from Paul Speidell, director of state government affairs at CVS Health, who wrote:

“Patients are not required to provide Social Security Number or state ID number, but we are required to ask for it if they are uninsured. If a patient does not have insurance, the COVID-19 vaccine administration cost is covered through a federal program operated by HRSA. In order to submit a claim to the HRSA administrator, providers such as CVS Health are required to attest that we asked the patient to provide either a social security number or valid driver’s license/state ID number. We do not actually require that the information be provided ― i.e., the patient doesn’t have to give it, but we are required to ask for it.”

Speidell added that “we need to ensure the staff at that store are clear on the proper process and they will conduct that education. We are going to reiterate the process to our teams more broadly as well. I appreciate the Delegate raising this to our attention.”

Peña-Melnyk, who has given out her phone number on Spanish-language radio stations so that people can contact her with issues they encounter, expressed gratitude that the chain was responsive to her concerns.

“It’s supposed to be easy,” she said. “It’s a public health function. And they’re making it very difficult for people by screening them.”

The Senate’s vaccine work group was told that Maryland now ranks 27th in the country for first doses and 19th for second doses administered.

According to The New York Times vaccine tracker, Maryland now matches the national average for percentage of the population to receive a first dose (18%) and doses used (78%).

Part of the explanation for Maryland’s lagging statistics up until now, Acting Health Secretary Dennis R. Schrader told the panel, is that 98,000 doses that went to Walter Reed National Medical Center in North Bethesda were counted as being part of the state’s allocation.

A legislative analyst told the panel that the state’s death rate has tumbled in the last few weeks — a development likely linked to the vaccination program.

The state’s rolling seven-day average stood at 33 deaths as recently as Feb. 8. It is now at 7.5.

The state’s release last week of vaccine distribution figures for the first 11 weeks of its rollout continued to prompt questions about decision-making.

Kent County, for example, received 28 doses for every 100 people, while Anne Arundel received 8.8 — a spread of greater than three-to-one.

Harford, the seventh-largest county by population, received the second fewest number of vaccines, 9.2 per 100 residents. In a statement, County Executive Barry Glassman (R) said “local government leaders had been assured that Maryland was distributing vaccines based on population, so I was extremely disappointed to learn that there are wide disparities.”

‘“Clearly the state needs to refocus on equity and on balancing distribution by population,” he added.

Schrader told the Senate work group that the department has made adjustments.

The eight largest counties and the city of Baltimore received approximately 79% of the roughly 196,000 doses distributed in weeks nine through 11 of the campaign, he said. 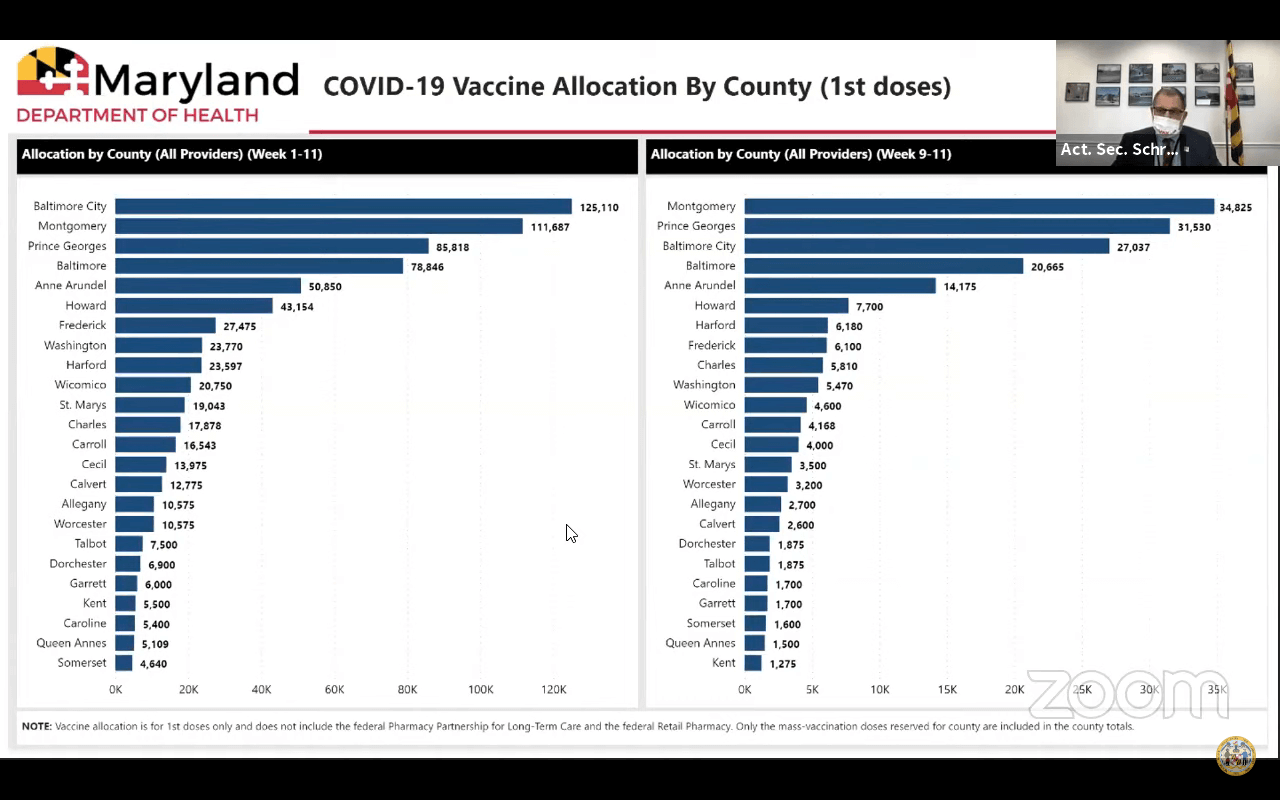 “If the population in one jurisdiction is finding vaccine somewhere else, we’re making adjustments … to make sure that every county is getting a fair allocation,” he said.

Some of the larger counties that received fewer doses during the early weeks of the vaccination campaign tend to vote for Democrats, while the smaller counties, which initially got the most doses relative to size, lean Republican.

“It’s created a widespread perception that the state has politicized the vaccine rollout,” said Hucker, the Montgomery Council president. “The easiest way for the governor to address this is to give all the large county health departments the same number of vaccines per capita as he does to tiny rural counties.”

Glassman called the state’s registration system “fragmented.” He said older people and those without a computer were most disadvantaged.

“Along with other local leaders, I asked for a one-stop registration process and greater support for local health departments to reach vulnerable populations,” the executive said. “Every resident must have access to this lifesaving opportunity.”

As the pandemic began, the rolls of Marylanders seeking food stamps swelled by 35%.

COVID-19 booster shots are on track to become as frequent as the annual flu shot, though high-risk people may need more than one dose…