A sea of gloved fists — white with knuckles painted blood red — floated above bowed heads outside the State House Thursday evening as advocates read the names of Marylanders who had died during interactions with the police.

Advocates from the Maryland Coalition for Police Accountability and Justice gathered to make another push for lawmakers to meet their demands for meaningful reform following a year that put police violence against Black and Brown people on aggressive and inescapable display.

Their asks: Remove police officers from public school campuses; re-establish local control of the Baltimore Police Department; create a constitutional statewide use of force statute; pass the Public Information Act Reform without weakening it with amendments; and fully repeal the Law Enforcement Officers’ Bill of Rights — “Nothing less!” read a flier advertising the rally.

The coalition’s timing was prescient.

After weeks of voting, the Senate Judicial Proceedings Committee had finally moved all nine bills included in the Maryland Police Accountability Act of 2021 over to the House, including legislation to:

And the House Judiciary Committee was to hold its first, full-body voting session on House Speaker Adrienne A. Jones’ omnibus policing bill just moments after the rally ended.

Led largely by women of color, the coalition took issue with the way both chambers have pursued reform.

Yanet Amanuel, a public policy advocate at the ACLU of Maryland, said Jones’ bill has insufficient civilian oversight. But much of the conversation revolved around the communal frustration in the amended legislation that moved out of the Senate the day before.

While several of the bills that moved through the Senate Judicial Proceedings Committee were lightly amended, advocates looked on in disgust as some of their prioritized legislation, notably Sen. Jill P. Carter’s bill to repeal and replace the Law Enforcement Officers’ Bill of Rights, was thinned out.

[Read our primer on the Law Enforcement Officers’ Bill of Rights here.]

Only one of the bills included an amendment, which was considered friendly, on the Senate floor before the package was voted out in full.

Green was fatally shot in January 2020 while handcuffed in the front of a police car by a law enforcement officer in Prince George’s County.

Owens said that she deliberately chooses not to talk to lawmakers about her cousin, who she affectionately referred to as “Boo Boo.” She said that “they don’t deserve to know his story.”

“They can read it in the paper,” Owens said. “All I care about is why you feel like it was OK for him to be murdered in that fashion.”

“You have the opportunity to change these laws and you don’t,” she insisted.

Advocates made it clear that they are ready to take dramatic action for the sake of their lives and safety, and have grown tired of the Annapolis status quo.

“We have to remember that right in this moment is where they want us to stop,” said PG Change Makers Coalition Co-founder Krystal Oriadha. “All they want is for us to come to their doorstep, ask and go home.”

“Well, we know better than that.”

She said that it’s time to remove lawmakers who don’t take policing seriously from office.

“Go ahead — rip apart our legislation if you want to. Go ahead and say you’re not gonna call it for a vote, keep it in the drawer if you want to,” Oriadha said. “But ask [former House Judiciary Chairman Joseph F.] Vallario (D-Prince George’s)] what happened to him, ‘cause he ain’t here no more.” 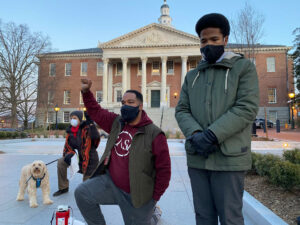 Del. Gabriel Acevero (D-Montgomery) was one of two lawmakers to appear at the Maryland Coalition for Police Accountability and Justice’s Annapolis rally Thursday evening. Photo by Hannah Gaskill.

“I’m also proud to stand with you all in this fight for justice, for accountability and for a transformation in the way that we do public safety in this country,” Acevero said during his impassioned speech.

Acevero acknowledged the Senate’s “watered down” reform package, and said that the public should be paying attention to Anton’s Law, a bill he co-sponsored with Carter that would make police misconduct records available for public inspection.

The bill is one of the coalition’s priorities and received minimal amendments in the Senate Judicial Proceedings Committee.

“We need to bend government to our will,” he said.

“You see, you can hold us accountable for what watering down bills and our positions on bills because you know what we’re doing. But we don’t know what law enforcement agencies are doing in our communities and, as a result, we can’t hold them accountable,” Acevero explained. “As a result, we don’t have trust; and as a result, this racist system of policing continues to perpetuate and the only people who are impacted are people that look like me.”

“But that changed today,” he continued. “It changes today because we’re not just going to get Anton’s Law passed on the House side, we’re gonna repeal the Law Enforcement Officers’ Bill of Rights; we’re gonna pass a strong use of force; we’re gonna ensure independent prosecution; we’re gonna ensure community oversight of police and sheriffs and every single law enforcement entity that patrols our streets.”

Editor’s note: This story has been updated to add the presence of two additional lawmakers at the rally.