It comes as no mystery to Serenella Linares that Latinos have been sidelined by the mainstream environmental movement.

“For the longest time, it was a matter of perception, that Latinos didn’t care, or were unaware of the environmental issues that we face today,” she says. These [are] really big perceptions [about us] that we need to fix,” says Linares, who is co-chair of Naturally Latinos, a bi-annual event. Sponsored by the Chevy Chase-based Audubon Naturalist Society, it brings Latino environmentalists together to learn, grow and network around their careers.

This year, the 3-day conference was virtual and welcomed 350 attendees, largely from Washington area non-profits, and government agencies along with teachers, students and retirees. Others joined from across the United States and other countries.

Linares is the first Latina senior staff member of the Audubon Naturalist Society, where she is director of adult programs.

This was the 3rd Naturally Latinos gathering since 2016, and the third co-chaired by Eliza Cava, ANS Director of Conservation Policy and Programs. She says ANS around 2014 began to rethink its strategy on how best to advance its mission that links conservation activities with environmental education. “ANS embarked on a journey of inclusion and growth in the community that we serve, and that we want to serve more in the future,” she says. “Any organization that wants to thrive or wants to survive needs to include the population that is around them.”

There is no denying that demographics are changing.

ANS had no further to look than its own back yard. U.S. Census data in 2019 shows that Hispanics make up 16.04% of the National Capital Area. In Maryland, Hispanics account for 10.4% of the population, but in certain communities such as Langley Park, Riverdale Park, East Riverdale, Templeville and Marydel, Hispanics are in the majority.

Two Latinos now sit on the ANS board. In addition to Linares’, hired in 2016, ANS has hired Latinos to head advocacy programs, and supports Naturally Latinos and ANS’s other flagship biannual conference, Taking Nature Black. “I use ANS’s resources, connections and structures to expand outreach, she says. “By including new voices, you find better solutions to today’s problems.”

That means taking more projects beyond Woodend, its 40-acre headquarters and the two ANS satellite sanctuaries in Virginia.

Eliza Cava had her eye on Long Branch, in Silver Spring, whose residents are largely Latino, undocumented and non-native English speakers. She began to know them and their namesake stream, a tributary of the Anacostia river and a community asset. “We discovered that families were interested in [the stream], but were weary of having kids play in it, and wondered whether it was safe because of all the plastic, cans, bottles and other trash.”

Cava found an ally in volunteer and activist Vanesa Pinto, Education and Program Director for CHEER, a non-profit in Long Branch. Her work there helps educate and empower residents on issues like health care and housing. Since she immigrated from Bolivia in 2001, Pinto, an accountant, cultivated new leadership skills as co-chair for the Parent Advisory Committee for Linkages to Learning Program (YMCA program) at the county level.

Collaboration with ANS got underway in 2018 with a grant from the Chesapeake Bay Trust, and buy-in from other community partners.

Neighbors began to show up for trail walks and workshops, where Spanish was spoken, and bi-lingual guides helped identify species and analyze water samples. “It was like, wow!” Pinto says, “It was really making you reflect on the stream,” she adds. “But I was not the one who was going to tell them what to do.” Instead, she says the project, funded for a second year, has become incubator for action. Ten families stepped forward. Their job will be to devise and promote community-based solutions on stream health as they see it.

The grant provides stipends for that work, a move that Abel Olivo, an ANS Latino board member strongly supports. “[With] these shared leadership experiences people can start to grow and continue to grow and think about ways they can lead their communities, their families, their neighbors and friends into this [environmental] space,” he says.

As a fourth generation Mexican-American, who grew up in a migrant farmworker family in Ohio, Olivo has strong ties to his Hispanic roots and a passion for nature. Over the last twenty years, he has worked in Washington as a federal lobbyist on housing issues, and as outreach director at Corazon-Latino, a national non-profit that fosters land stewardship. He has seen racial and ethnic inequities up-close, one example, in Prince George’s County, mapping trees and analyzing storm water, where he says, “I recognized that [black and brown] communities have a low tree canopy, high impervious surfaces, and so are less able to rebound from severe weather events linked to a warmer climate.”

Last summer when racial protests dominated the news, Olivo co-founded Defensores de la Cuenca/Defenders of the Watershed, whose broad goal is to connect Latino communities in the Chesapeake Bay Watershed, that includes six states and the District of Columbia. “It’s strange that one would want to start a new endeavor in a pandemic,” he says. “But the need to address these long-standing environmental, social and economic injustices was just too great, not to take action.” 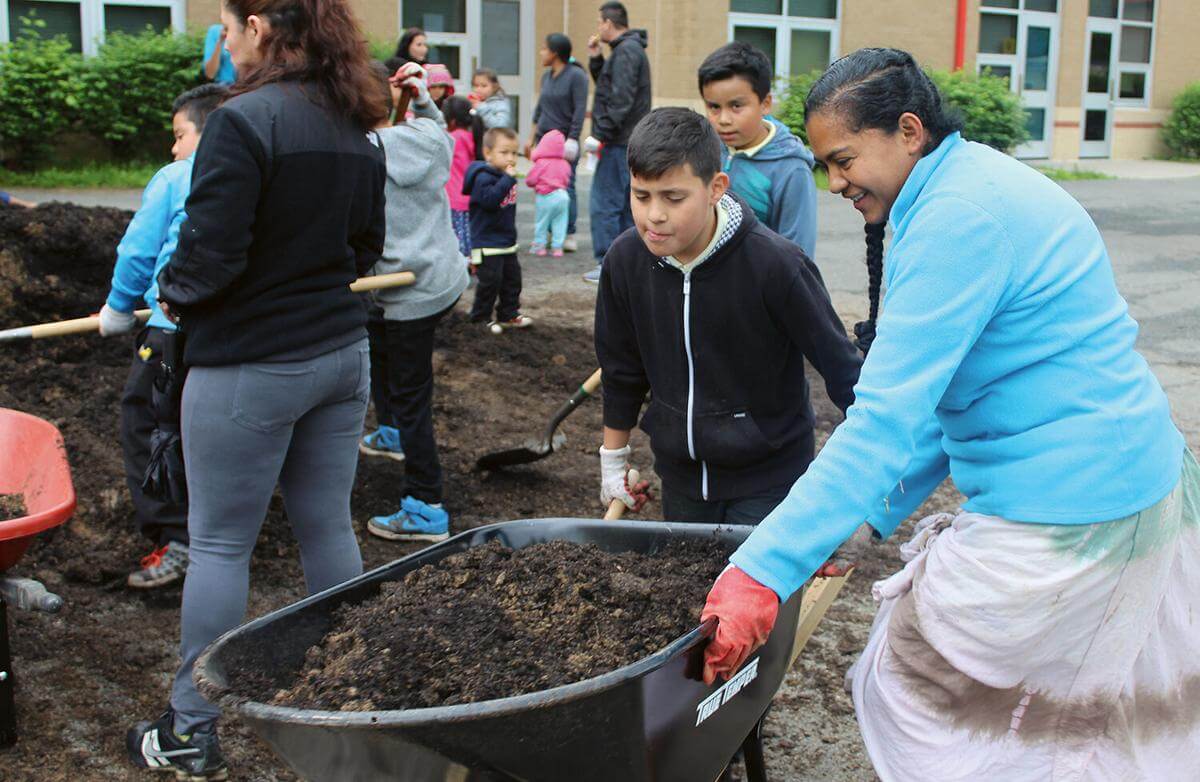 Olivo says, as a Latino-led environment group, built on Latino values and culture, Defensores de la Cuenca is positioned to attract Latinos who have largely been ignored by the white-centric environment movement. “We’re reaching out [in Spanish] to churches, schools, community gathers spots, on social media, on the radio, and work to remove all barriers.”

Defensores promotes cleanups, family-friendly activities, and plans to start a leadership academy, that would begin, with Prince George’s County residents. The program, modeled after the Anacostia Watershed Stewards Academy, would create new watershed stewards among Latinos, who, Olivo says, become, “future environmental champions who engage in stewardship activities on their own and impart knowledge of how the health of our watershed impacts personal health with others.”

Olivo sees this vision replicated into fast growing pockets of Latinos in the Chesapeake watershed from Easton on Maryland’s Eastern Shore, to Prince William County, Virginia, to Lancaster and Wilkes-Barre in Pennsylvania.

Promoting Advocacy as a Promotora

When Deputy Executive Director, Ramon Palencia-Calvo, originally from Spain, was hired 2014, he also launched Chispa Maryland, within Maryland LCV. “[It’s] a grassroots program to ensure Latino families have strong leadership and power to identify and influence environmental and public health policies and decisions that affect their lives,” he says.

“Our hope is an environment movement that is inclusive and just, where there is a diversity of voices, those voices are respected as equals, and we want to see those diverse voices leading the movement.”

Palencia-Calvo found a warm welcome in Langley Park, where residents 82% Hispanic, experience a slew of environmental problems tied to sub-standard housing, air pollution and health. He began meeting residents, who, like Cándida García, from Honduras, were passionate about a clean environment.

By the time he met García more than ten years ago, she was already recognized as a community activist.

Arriving in the United States in 2005, not knowing the language, her first refuge was the Lourie Center Early Head Start Program in Hyattsville, where, she enrolled her daughter, the eldest of her now four American-born children. There she met other moms, garnered information, and ended up serving on its policy council. Today García is a member of the Hyattsville Education Committee and sits on the Prince George’s County Schools Parent and Community Advisory Council. In nearby Langley Park, she is active in the Langley Park Civic Association, and remains connected with the Rosa Park PTA, where was president for two years.

By 2016, García added Chispa Maryland to her resume, graduating as a promotora or advocate from its structured eight-week program, taking classes in governance, environmental rights, studying the role that Latinos play in the environmental justice movement in the United States. She was among twelve in that first Chispa Maryland cohort. Now more than 100 Chispa-trained promotores are working as activists in their communities.

Watching her in action, Palencia-Calvo says, “She’ exceptional in building people power, which is key to bring about change.”

“That’s my role as a promotora. It’s my passion,” she says, as she works to balance family life and activism. “We’ve accomplished things. And, when you do, you know it’s worth the fight.”

That fight continues with a Maryland LCV virtual Climate Action Lobby Week Kickoff on February 22, with many events in Spanish or with simultaneous translation. The focus is on legislative priorities of the 2021 Maryland legislative session.

Rosanne Skirble is a freelance writer who lives in Silver Spring.