I don’t remember exactly where and when I first met Jamie Raskin, but it had to have been in 1998, when his good friend Doug Gansler was running for Montgomery County state’s attorney. I would see Raskin with Gansler at candidate forums, political gatherings and other events I was covering.

Gansler was a fun and colorful figure, and something of a braggart. Raskin was very friendly, but more soft-spoken and cerebral. With time, I came to learn that Raskin, like me, lived in Takoma Park, so I’d see him around town every now and then and we’d chit-chat.

I distinctly remember running into Raskin in 2001 or thereabouts at a party at Ted Kennedy’s stately house, in the Kalorama neighborhood of Washington, D.C. Yes, you read that right.

But before you assume I live some kind of glamorous lifestyle, let me say this: The party was in honor of the American Prospect magazine, which was based in Boston, and where a good friend of mine from college had just landed a job. The event was to celebrate some big grant the magazine had just gotten, so my friend invited my wife Caryl and me to tag along.

As Kennedy and the magazine’s top editors and other important personages spoke, I cased the joint ― how many other times was I going to get invited to Ted Kennedy’s house? I was especially struck by an autographed picture of Rose Kennedy, the senator’s famous mother, on the mantelpiece over the fireplace in the living room.

“To Teddy, who makes us all so proud. Love, Mother.”

Who keeps a framed, autographed picture of their mother on their mantelpiece? It was unforgettable.

At some point, over a platter of chicken skewers, I noticed Raskin was there, and we said hello.

“Do you know a lot of people here?” he asked me.

“No, I don’t know anybody here except for my old college friend,” I replied. “I thought you’d know a lot of the people here. Do you know anybody?”

I knew Raskin was a well-regarded law professor. I probably knew at that point that his dad was famous in lefty D.C. policy circles and that his mom had been a well-regarded feminist author. So I was a little surprised that he seemed to feel just like I did at this event, like a kid pressing his nose against a window looking in at a crowd where he didn’t quite belong. That memory has stuck with me as I’ve watched Raskin’s political career through the years.

In 2006, Raskin told me he was running for state Senate, and I was excited by the news. But I knew his Democratic primary opponent, veteran Sen. Ida Ruben, would be formidable. She had doled out a lot of political brisket in the district and all over Montgomery County during her 30-year legislative career.

But Raskin ran a joyous, Kennedy-style campaign, fueled by kid operatives and volunteers. To my surprise, the race wasn’t really close.

From time to time I’d still run into Raskin in downtown Takoma Park, wearing a backward baseball cap and walking his dog. We’d always have a pleasant chat. Raskin had a very productive career in the state Senate, and there was some surprise when he did not run for the open attorney general seat in 2014, when his friend Gansler ― by then the AG ― ran for governor. 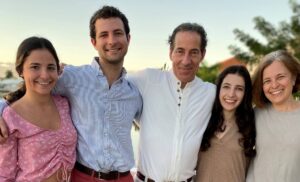 U.S. Rep. Jamie B. Raskin (D-Md.) and his family. Family photo via the congressman’s office.

At some point, I learned that my daughter Genevieve knew Raskin’s son Tommy at Montgomery Blair High School. They weren’t close friends, but they took a pre-calculus class together, and Tommy regularly helped Genevieve with her homework. There’s a funny story about this, but I think I’ll wait till I have the opportunity to tell it to the Raskin family directly, in order to protect the innocent. Suffice it to say that Tommy Raskin was one of Genevieve’s very few high school classmates that she didn’t disparage ― no mean feat.

In 2014, when Raskin was seeking a third term in the Senate, there were two vacant House of Delegates seats in his district and something like a dozen candidates running. Raskin put out a long treatise on the primary race in which he found something nice to say about every last candidate ― and he wound up endorsing the three winners, veteran Del. Sheila Hixson and newcomers Will Smith and David Moon. The piece was vintage Jamie.

In 2016, of course, Raskin ran for and won Chris Van Hollen’s congressional seat. There was another large field of impressive Democratic candidates, and I don’t think I ever heard Jamie speak ill of any of them. Deep as the field was, Raskin had the biggest and most passionate base, mastery of the issues, and a record worthy of voters’ consideration. It was close, but he won.

On Jan. 21, 2017, I headed down to the women’s march in D.C. with Caryl and my daughter Zoe (I was there as a working journalist and observer, not as a protester, of course). We ran into Raskin, less than three weeks into his new job in Congress, in front of the Teamsters union headquarters near the Capitol. Although it was a cold day, he was wearing a suit, and if I remember correctly, no overcoat. I don’t think I’ve seen Raskin in anything but a suit since then ― attire befitting a man of his position.

Jamie was supportive of the Maryland Matters project from the outset. He was one of a handful of political leaders who spoke at our very first fundraising event, in 2016, before we had even begun publishing, and he wrote us a nice check, too. He was scheduled to speak at another event for us in the fall of 2017, along with Will Smith and Peter Franchot, but was stuck on the Hill and sent Tommy in his place, a beautiful gesture on a bunch of different levels. And he spoke at our most recent fundraiser, virtually, last November, along with state Senate Minority Whip Mike Hough (R-Frederick) and political strategist Lucinda Ware.

As I recount these pleasant encounters with the congressman, and his acts of kindness and encouragement through the years, it occurs to me that I’m hardly unique ― that there are thousands of people Raskin has known and befriended and helped in the communities he serves and in the Maryland political world, who aren’t intimate friends but have been drawn into his orbit and feel a kinship with him. I think it’s why, at least in Montgomery County, you see more Raskin bumper stickers on cars than any other politician’s ― and why so many Democratic elected officials display Raskin bumper stickers along with their own.

It’s also why Tommy Raskin’s death six weeks ago feels like such a profound gut punch ― and why so many people are grieving alongside the Raskin family and expressing admiration for the family’s willingness to celebrate Tommy’s rich life while at the same time candidly discussing the demons that drove him to suicide.

Then came the events of Jan. 6, the storming of the U.S. Capitol, and the second impeachment of President Trump.

Raskin led the House impeachment team, and he was at his professorial, prosecutorial, passionate best. But he also spoke spellbindingly about history and about the durability and fragility of the Constitution. And of course, he spoke with unbridled emotion, about losing Tommy, about his concern for his daughter and son-in-law who had accompanied him to the Capitol on Jan. 6, and about the deep and emotional scars his family and his country have endured from that day.

It was a presentation for the ages, something any parent could embrace and empathize with. Even Republican senators who voted to acquit Trump said Raskin’s performance was powerful and effective.

Jamie Raskin is a political superstar now. My sister in New York texts me whenever she sees “JR” on TV. A friend in Germany writes to tell me he loves him. Someone on NPR’s “Wait, Wait Don’t Tell Me” told a joke about Raskin groupies. Any American who has followed even a small dose of current events over the last few weeks knows who he is.

In my line of work, it’s hard not to think about what the next political steps might be for effective elected officials. Did Raskin’s performance during impeachment leap-frog him to the head of the Democratic line the next time there’s a U.S. Senate vacancy in Maryland? No doubt he’d love to be House Judiciary chairman one day ― but he’s still a relatively junior member, and there’s a long line of Democrats on the committee with more seniority than he has.

But I doubt Raskin is thinking about any of this. I’m sure he’s just thinking about serving his country and his constituents, honoring the memory of his son, and working to bring out the best of America by any peaceful means necessary. As for his friends, admirers and constituents, we’re just going to have to get used to sharing him with the rest of the country.