My wife is on a daily mission. She has taken it upon herself to get her immediate family members vaccinated. Her grandmother is 92.  Her parents are 70 and 68. Her sister is an elementary school teacher. Her brother works at a state university directly with student athletes. Everyone but her is eligible under some part of Phase 1 for vaccination.

In fact, according to the Department of Health, over 2 million Marylanders (approximately one-third of the population of Maryland) is eligible under Phase 1, while we are only getting approximately 12,000 vaccine doses a day from the federal government.

While my daughter signs into school, and I sign into two different laptops every morning (one for my regular job and one for my legislative work), she uses her laptop, a borrowed laptop and multiple cell phones to navigate the vaccine Thunderdome established by the Department of Health’s everything-and-the-kitchen-sink policy of vaccine distribution.

Did you count that? Five laptops, multiple cell phones and other devices sucking bandwidth in the house at the same time. We have already received the dreaded gouging email from Comcast saying that we have hit our plans data limit for the month and will be charged extra. 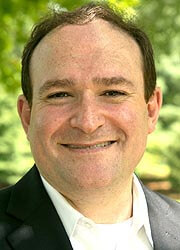 Thankfully, we can afford it. How many families can afford computers and high-volume data plans, much less the time to sit on the couch for hours trying to get an appointment?

News flash, most of the lists do not actually have a mechanism for removing yourself assuming people remember which lists they sign up on. Do they even have the time to try and get on multiple lists that are all swamped with all the same people taking slots away from each other?

Unlike other states that have decided to manage this process with a single sign-up stream, Gov. Larry Hogan has decided to take his 1980s hero worship of Ronald Reagan to a new level with an “everyone for themselves, I got mine, good luck getting yours” approach.

First, it was a disaggregated county-by-county approach, then he took doses away from the counties just as that process was getting established to give doses to private pharmacies. Now, they are taking more doses away for the state-run vaccination centers. The governor’s key policy in this matter seems to be to react to his failed policies by adding more layers in the hopes no one notices.

While every state is getting a fairly proportional number of vaccines, Maryland continues to rank toward the bottom of people getting vaccinated, and now we are hearing that there might not be enough doses for the second shot pitting people who have received one dose against those that have received none.

When asked, Gov. Hogan and Acting Health Secretary Schrader lament the need for more doses and point fingers at the counties.

I hope that six months from now, we will have enough doses and this process will work itself out. No doubt, when that happens Gov. Hogan will return to his usual posturing of patting himself on the back like the one kid on the group project who did the least, while the rest of the group worked hard to receive an A grade.

When that happens, let us not forget what it took to get us there.