Suspicious that they may not be getting their fair share of COVID-19 vaccines, leaders from 22 of Maryland’s 24 jurisdictions urged Gov. Lawrence J. Hogan Jr. to be more transparent in how the state’s doses are being distributed.

The letter was signed by Democratic and Republican county executives from Maryland’s largest counties, county commission chairs, county council chairs and Edwin Singer, the president of the Maryland Association of County Health Officers.

“Weekly allocation memoranda from the Maryland Department of Health state that allocations are based on county population, but no data is provided by location for pharmacy chains,” the leaders wrote.

“Limited data on location is provided for hospital systems. Our residents and our local health departments want to know where doses will be administered and how many.”

“Local health departments submit requests for doses each week to the MDH based on the capacity they have built with taxpayer dollars. Diverting doses to private providers and new state-run sites leaves that publicly funded capacity underutilized,” county leaders wrote.

Local officials claimed their health departments “have consistently outperformed private providers in both the speed and the targeting of vaccinations to under-served and vulnerable communities.”

“Each week, Maryland Department of Health sends its vaccine allocation plan to a limited list of providers with a warning that it should not be read by any individuals not on the distribution list,” according to the letter.

“Last week, the notice was sent on the Friday before the week of the allocation, and the week before that it was sent Saturday at 8 p.m. Providers need more advance notice to plan logistics, and the public deserves to know how many doses each local provider has available.”

“Congress made the decision to direct all local health department funding in its most recent relief funding through states,” officials told the governor. “We hope that the funds move to the local level quickly.”

Michael Ricci, the governor’s spokesman, on Tuesday released a chart showing how $114 million in funding will be distributed to the counties.

“Local health departments account for roughly 37% of the vaccinations in Maryland,” he wrote, “and we appreciate the contribution they make to our expanding distribution network.”

A second chart showed that the local health departments have used 90.8% of the first-shot doses they have received from manufacturers Pfizer-BioNTech and Moderna.

The governor’s office announced on Tuesday the start of a new vaccination program at independent living facilities, beginning with Leisure World in Silver Spring and Epiphany House and Gallagher Mansion in Baltimore City.

The sites were chosen based on input provided from local leaders, Ricci said.

The program is a joint initiative of the Departments of Health and Aging.

Local agencies on aging will work with communities that aren’t registered in the federal Pharmacy Partnership for Long-Term Care Program’s Part B to establish vaccination clinics for their residents and staff, the governor’s office said.

The first vaccination clinics will start this week, with teams from MedStar Health vaccinating residents at the three facilities.

Over the next few weeks, the clinics together will provide vaccinations to more than 7,000 Marylanders age 65 and over.

They said the mass vaccination site at Six Flags in Largo, a 64-mile round-trip from Rockville, cannot reasonably be expected to serve both Montgomery and Prince George’s counties.

Together the two jurisdictions account for one-third of Maryland’s population.

“What do you say to Montgomery County residents who don’t have the luxury of having a car and a flexible work schedule to take off work and drive to Six Flags or to Baltimore to get vaccinated?” asked Montgomery County Council President Tom Hucker (D).

Chan defended the use of the Six Flags site, saying the state had infrastructure — tents and other equipment — already on location from the coronavirus testing operation it ran there last year.

And she said that “mass vax” sites represent just one component of the state’s strategy, which also includes pharmacies, hospitals, local health departments and community clinics.

The state opened high-volume sites at Six Flags and the Baltimore Convention Center on Friday. Hogan has pledged to open others.

“We are open to considering where other mass-vaccination sites could exist,” said Chan. “The governor is looking at equity from a geographic standpoint, as well as from racial, ethnic and other vulnerable populations.”

On Monday, a Hogan spokesman claimed that Montgomery was “sitting on” 6,000 doses. 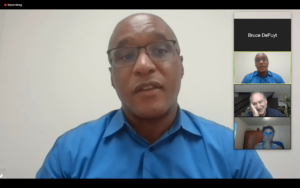 Local agencies, he said, “have a unique opportunity to know the needs of our residents closely.”

“The health departments have administered a higher percentage of doses than any of the other venues, including retail pharmacies, the federal pharmacy partnership with nursing homes and the retail transfer program,” he said.

Gayles called it “incredibly challenging” for residents to have to go to another jurisdiction for a vaccine.

“I know we’ve had private conversations, but I want to publicly go on the record and say we have multiple sites here in Montgomery County that could be stood up for mass vax sites, including our Fairgrounds and numerous other venues,” Gayles added.

Heather Shek, who leads governmental affairs for the Maryland Department of Health, defended the state’s decision not to use a centralized sign-up, saying that only four states have adopted that approach.

“We recognize that there’s frustration getting an appointment, because of our limited supply of vaccine,” she told the Council. “But what we’re doing is working. We’re getting people vaccinated.”

Just over 28,000 people received a dose on Monday, the state reported on Tuesday, a figure almost evenly divided between first and second doses.

Maryland has now given 9% of its population a first dose, a rate that lags behind 36 states and the District of Columbia, according to Bloomberg.

Montgomery is a majority-minority jurisdiction where students in the county schools system speak more than 100 languages, she said. In addition, the county passed a social justice and equity resolution in 2019, requiring that all county programs be viewed through the lens of a diverse community.

“There is a lot of fear in terms of what is out there as rumors,” she said. “So this is not acceptable.”

“We are here suffering, because the disconnect that has been in place in terms of our ability to access state decision-making and input has really hindered our work,” she added. “So I respectfully request that we work together.”

Officials pledged to correct the materials.