On a bipartisan vote of 56-44, the U.S. Senate Tuesday asserted the constitutionality of its right to try former President Trump for inciting the deadly Jan. 6 insurrection at the United States Capitol. The vote cleared the way for an historic and unprecedented trial starting Wednesday, scheduled to unfold over the coming days amidst raw emotions and sharp political divisions among Democrats and Republicans.After opening the proceedings with a 13-minute-long video compilation of the Jan. 6 assault that left five people dead, the lead House manager, U.S. Rep. Jamie B. Raskin (D-Md.), told the senators: “If that’s not an impeachable offense, then there’s no such thing.” Republican Sens. Bill Cassidy of Louisiana, Susan Collins of Maine, Lisa Murkowski of Alaska, Mitt Romney of Utah, Ben Sasse of Nebraska, and Patrick Toomey of Pennsylvania, all voted in line with Democrats on the constitutionality question. But Democrats would need an additional 11 Republican senators to secure a conviction on the one article of impeachment charging Trump with incitement.Two of Trump’s new lawyers, Bruce L. Castor Jr. and David Schoen, insisted a Senate trial was constitutionally out of bounds and charged that Democrats were chiefly interested in removing their client as a viable presidential candidate in 2024.“Let’s understand why we’re really here,” Castor said. “We’re really here because the majority of the House of Representatives does not want to face Donald Trump as a political candidate in the future.” Raskin argued that allowing former President Trump’s actions to go unpunished would create a dangerous new “January exception to the Constitution of the United States.” The video Raskin showed included footage from the Senate floor, videos posted online by the rioters, and clips of Trump’s address at the rally of his supporters shortly before and during the attack, mounted as the Electoral College votes were about to be formally counted in a joint session of Congress. 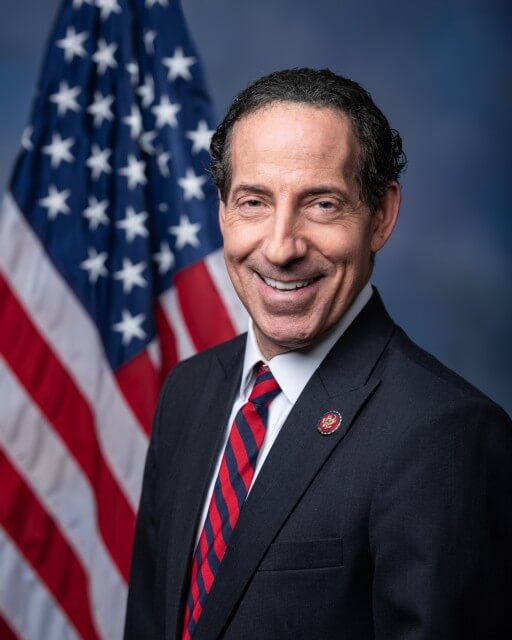 Raskin later gave a riveting account of the personal pain that he experienced on that day — the fear of losing his daughter and son-in-law who had accompanied him to the Capitol, compounded with the recent loss of his son, who had been buried the day before. After reuniting with them following the chaos in the halls, Raskin said he tried to reassure his daughter Tabitha that she would not face such danger when she returned to the Capitol. He choked back tears as he recalled her reply: “Dad, I don’t want to come back to the Capitol.” “Of all the terrible brutal things I saw and heard on that day and since then, that one hit me the hardest,” the Maryland lawmaker said.

“Senators, this cannot be our future,” Raskin said. “This cannot be the future of America. We cannot have presidents inciting and mobilizing mob violence against our government and our institutions because they refuse to accept the will of the people under the Constitution of the United States.”  Fellow House manager Rep. Joe Neguse (D-Colo.) called the insurrection the “Framers’ worst nightmare come to life.” Citing legal precedents from throughout American history, Neguse argued that it was indeed constitutional for the Senate to try the president after he already has left office.Neguse pointed out the importance of the British impeachment case in the 1780s and 1790s against Warren Hastings, which was started two years after he held the position of governor-general of Bengal. The case was cited by George Mason during the writing of the Constitution’s clauses about impeachment. Neguse also cited the impeachment of William Belknap, President Ulysses Grant’s secretary of war, arguing that not only did the Senate impeach Belknap after he had resigned, but they also spent two weeks debating the constitutionality of the issue, eventually concluding that the Senate did have the right to impeach a person who no longer held office. Rep. David Cicilline (D-R.I.), another House manager, said that “moving on” and dismissing the impeachment case was “wrong.” He added that Trump had “sided with the insurrectionists” and “validated their attack.” “He told them, ‘remember this day forever,’” Cicilline said. “Hours after, they marched through these halls looking to assassinate Vice President [Mike] Pence, the speaker of the House, and any of us they could find.” “I really do not believe that our attention span is so short, our sense of duty so frail, our factional loyalty so all-consuming, that a president can provoke an attack on Congress itself and get away with it, just because it occurred near the end of his term,” Cicilline said.In a 50-minute-long defense that appeared to be delivered informally, Castor argued that the House Democrats had denied Trump due process. He also contended that the Constitution does not permit the impeachment of a president who is no longer in office because the process is specifically designed to remove an individual from office — a moot point in Trump’s case.Castor accused Democrats of taking the easy way out and of belittling the judgment of the American public. “The American people just spoke and just changed administrations,” Castor said. He argued that impeachment has now become a common process, noting how rare it was before President Clinton’s impeachment and trial in late 1998 and early 1999.“This is supposed to be the ultimate safety valve, the last thing that happens, the most rare treatment….so the slippery slope principle will have taken hold if we continue forward,” Castor said.

He warned that the trial could backfire on Democrats, who face midterm elections next year that could threaten their control of Congress.Schoen said Trump was the victim of “the insatiable lust for impeachment in the House for the past four years.”Schoen illustrated his point by showing a montage of Democratic lawmakers calling for Trump’s impeachment over the course of his presidency.

The video included clips of Raskin as well as several other congressional Democrats. With the exception of U.S. Sen. Elizabeth Warren (D-Mass.), every member of Congress depicted in the video was a person of color or Jewish.
Schoen then sought to counter the House managers’ argument that Trump’s conviction is needed to bring the country together after the insurrection.
“They say you need this trial before the nation can heal, that the nation cannot heal without it,” Schoen said. “I say, our nation cannot possibly heal with it.”He argued that the trial will “open up new and bigger wounds across the nation,” with many in the country viewing it as “a chance by a group of partisan politicians, seeking to eliminate Donald Trump from the American political scene and seeking to disenfranchise 74 million-plus American voters, and those who dare to share their political beliefs and vision of America.”

Before his election to Congress in 2016, Raskin spent more than two decades as a constitutional law professor at American University Law School.

“Congressman Jamie Raskin makes us proud — proud to be Marylanders, proud to be Democrats, and proud to be Americans,” said Yvette Lewis, the Maryland Democratic Party chairwoman. “His heartfelt opening of the Senate impeachment trial showed that there is no Member of Congress better suited to defend our democracy and uphold the rule of law.”

“As he said today, ‘President Trump may not know a lot about the framers, but they certainly knew about him,’” Lewis continued. “Congressman Raskin’s deep knowledge of the Constitution and passion for our country stands in stark contrast to the lawless behavior of the past president — I’m confident that the case he presents will be irrefutable, and I hope justice will be served.”

The Senate trial is scheduled to last through at least the weekend or possibly into early next week.

Josh Kurtz of Maryland Matters contributed to this report.