“It’s really clear: the data consistently shows ongoing and, in some cases, growing health disparities in Maryland, including the impact of COVID-19,” she told members of that committee at a hearing Tuesday.

The bills, sponsored by Peña-Melnyk and Del. Robbyn R. Lewis (D-Baltimore City), aim to increase health in Black and Brown communities, which trails that of residents in white communities.

House Bill 28 would require health professionals to undergo implicit bias training prior to renewing their license or certificate to practice.

The bill would mandate that the governor allocate 1.2% of the Department of Health’s budget to the Office of Minority Health and Health Disparities each fiscal year and would require the office to publish health data by race and ethnicity on its website

Testifying in favor of the bill was Dr. Sherita Golden, vice chair and chief diversity officer for Johns Hopkins Medicine.

Golden said that implicit bias plays a big role in perpetuating existing healthcare inequities among Black, Hispanic and Indigenous communities and that those inequities are rooted in slavery and eugenics practices.

Kalyanaraman said that Anne Arundel County began collecting and publishing health data by race and ethnicity at the pandemic’s start and began to see the disparities arise as early as March and April.

Kalyanaraman explained that having this information has allowed the county health department to locate community testing sites where they were needed the most.

“This is the power of data,” he declared. “It reveals patterns that then allows us to act.”

‘She sends her love’

The Shirley Nathan-Pulliam Health Equity Act of 2021 seeks to create the Maryland Commission on Health Equity.

The commission would be tasked with deploying a “health equity framework” that will examine racial, ethnic, cultural, or socioeconomic disparities through a health equity lens, developing a plan to address known social determinants of health and setting goals to work towards general healthcare equality. And the commission would include policymakers and stakeholders from different areas of state government. 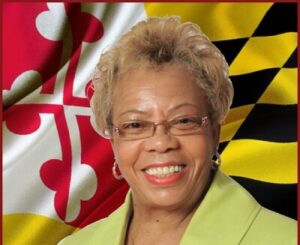 “She sends her love, but she is known for all these bills that I put [forth] today.” the bill’s sponsor explained. “Madam Chairman and members of the committee, [these] are really her work, so, you know, I give her the credit.”

Peña-Melnyk said that this legislation was crafted to “look for ways for units in state government to collaborate together on policies that will positively impact the health of the residents in Maryland” through considering factors outside of healthcare, such as the environment and economic opportunity.

Baltimore City Council President Nick J. Mosby (D) said that this proposed legislation is particularly poignant as the state faces not only a public health crisis that has disproportionately impacted communities of color, but economic and social justice crises, as well.

“This bill couldn’t be more timely,” Mosby said. “If we had a commission of folks in place that was looking at this on a regular basis, I know that Maryland would be on a better trajectory for underserved communities.”

Peña-Melnyk also presented House Bill 309, which would require the Office of Minority Health and Health Disparities to work in tandem with the Maryland Health Care Commission to publish a “health disparity policy report card” detailing the racial and ethnic identifiers that are provided to the commission by state health and occupations boards. The commission’s report card would compare that data against the state’s population by demographic.

This legislation would also require the Office of Minority Health and Health Disparities to respond to requests for racial and ethnic health data in a way that complies with federal privacy laws, and to meet annually with the Maryland Health Care Commission to discuss this data.

Golden, also testifying in favor of this bill, told the committee that racial and ethnic representation in healthcare is the first step towards cultural competency.

“We believe that diversity and inclusion in healthcare is a matter of life and death because the biased decisions that we make may adversely impact clinical outcomes for our patients,” she said.

How do you press the flesh at an event where all the participants have Old Bay on their hands?