The state teachers’ union responded Tuesday to a letter from Gov. Lawrence J. Hogan Jr. (R) and State Superintendent of Schools Karen B. Salmon’s last week, in which they told union leaders that “the roadblocks to resuming in-person instruction must cease.”

In a press conference last week, Hogan urged local school systems to return students to the classrooms, threatening them with legal action, and encouraged teachers’ unions to cooperate.

“I want to make it perfectly clear: I will do everything I possibly can do within the law to push to get all of Maryland’s children back into the classrooms,” Hogan asserted last week.

Cheryl Bost, the president of Maryland State Education Association, countered Hogan’s appeal for partnership by writing that Hogan has never once accepted a meeting with the union and that Salmon had ended all stakeholder meetings in August.

“While your letter called for partnership, your actions have consistently and inappropriately tried to paint educators as opponents and obstacles,” she wrote Tuesday.

Bost also rebutted Hogan’s claim that “there is no public health reason for school boards to be keeping students out of schools.” 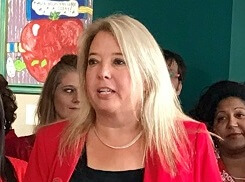 “This statement would be laughable if it were not so dangerous,” she wrote. “It is abundantly clear in light of the escalating number of infections, mutations, and deaths that coronavirus is anything but predictable.”

Bost noted that the safety measures endorsed by the union have always been aligned with the Centers for Disease Control and Prevention (CDC) and Maryland Department of Health. Although Hogan and Salmon contend that schools are not sources of super-spreader events, Bost argued that children who contract the virus could still transmit it to adults.

In addition, Maryland’s vaccine distribution has been one of the slowest in the country and “many educators are hearing at your press conferences that they can now get vaccines only to find no vaccine available to them in their counties,” she continued.

Referring to how Chicago cut pay from teachers who refused to teach in person and that South Carolina threatened to revoke teachers’ licenses, Hogan had said, “we do not want to have to take such actions here in Maryland.”

“I have never, in all my years, heard of a single statement uttered by a state leader that caused more tears, more anxiety, and more frustration among educators than your threat to withhold their pay and revoke their licenses at the very moments when they were working incredibly hard,” Bost wrote.

During the early days of the pandemic, the Maryland State Department of Education and the Health department set 5% positivity rate as a threshold for in-person instruction. However, state leaders say this metric is no longer the best predictor.

“You accused others of shifting goalposts, while you didn’t just move them, you now deny their existence. Is the positivity rate no longer important?” Bost wrote. It is confusing to see educators elevated to one of the priority groups for vaccines, but then for Hogan suggest that the availability of vaccines for teachers should not preclude reopening, she continued. These mixed messages have caused anxiety for teachers, according to Bost.

“No one wants to open school buildings safely and sustainably sooner than educators. That will continue to be our focus, and I hope it will be yours as well, rather than more U-turns in the state’s guidance and further inappropriate public bullying of educators,” Bost wrote.

“These actions do nothing to improve and save the lives of Marylanders, but your concerted efforts to improve vaccine distribution and health and safety protocols in school buildings very well could.”