The state’s largest state worker union announced the deaths of three more of its members from COVID-19 Friday, including two officers from the Department of Public Safety and Correctional Services and one worker from the University System of Maryland.

Officials from the American Federation of State, County and Municipal Employees Council 3 reported that Jimmy Williams, a correctional maintenance officer at the Baltimore City Correctional Center, died last week and that Mark Renner, a correctional officer from the Maryland Correctional Training Center in Hagerstown, died during the middle of this week.

Minimal details were provided regarding the employee from the University System of Maryland, who died in late December.

Todd Holden, president of AFSCME Local 1072, which represents 3,400 University of Maryland employees, said it appears there is “COVID-fatigue” spreading throughout the university system, noting that when other workers died the administration issued campus-wide emails.

Holden said it’s distressing that the union has to “do the legwork” to figure out who has died or become infected because of a lack of communication on the part of the administration.

“We have found that this is just something that has gone unnoted,” he said. “In this case, we did learn about a member, who we cherished and who is going to be missed by an awful lot of people, but the implication is who don’t we know about?”

Katie Lawson, a spokeswoman for the University of Maryland, College Parkd, told Maryland Matters Saturday morning that staff members were notified of the death the same day that it was confirmed to the university.

“We are saddened by the loss of one of our employees who worked in Facilities Management. As soon as we were made aware, we notified all FM staff the same day,” Lawson wrote. “We extend our heartfelt condolences to coworkers and family.”

AFSCME has now confirmed that it has lost seven members to COVID-19 since the outbreak of the pandemic in March: one from the University System of Maryland, four from the Department of Public Safety and Correctional Services, one worker from the Maryland Department of Health, and one employee from the Motor Vehicle Administration.

The union is also aware of three other state employee deaths, including one non-member from the University of Maryland and two unidentified workers from the Maryland Transportation Authority and the Maryland Department of Transportation. AFSCME officials speculate that there may be more deaths of state workers that they don’t know about.

Over 3,000 state employees have been infected with COVID-19.

“I can’t tell you how many times early on that we fought the administration about the use of PPE and having good health and safety protocols,” he said. “We just have a bottom-line question: Are you serious about taking the health and safety of your employees seriously, or do you view them as just a number to cast aside as you move down the road here?”

Hogan spokesman Michael Ricci said that there are a series of steps that the state must take before it can confirm and notify people of employee deaths.

“The department has an obligation to run through the proper protocols of notification and confirmation from the Office of the Medical Examiner. Their first responsibility is to the officers and their families,” said Ricci. “The union does not have — and clearly does not care to have — that solemn responsibility. We mourn the loss of these officers together as a state, and pray for their families.”

On Monday, the department reported only two staff deaths since the beginning of the pandemic. And while AFSCME reported that Williams died last week, he was not accounted for in the agency’s update.

Through Monday, 1,885 staff and 3,625 inmates had COVID-19 diagnoses confirmed by the department’s website; 20 inmates and two staff members were reported dead.

AFSCME insists that the Department of Public Safety and Correctional Services should have reported three dead employees.

As of Friday evening, all four employee deaths were accounted for on the agency website.

Late last year, Maryland Matters created a database using a publicly available dataset that reports cases in congregate care facilities in the state to track the number of COVID-19 infections confirmed by the Department of Public Safety and Correctional Services.

This dataset is provided through the state’s Open Data Portal and is updated each Wednesday.

In December, Maryland Matters reached out to Department of Public Safety and Correctional Services officials inquiring about inconsistencies between what is reported on its website versus what is shown on the data portal. For example, on Dec. 9, the open data portal’s dataset reported only 347 confirmed infections among inmates and 232 among staff; on Dec. 11, the department’s website showed 2,256 positive inmates and 1,340 positive staff — a jarring difference.

In response, department spokesman Mark Vernarelli told Maryland Matters on Dec. 22 that the department was working with the Department of Health to correct the reporting error, adding that the most accurate account is available on his agency’s website.

“For an accurate accounting of the current active cases affecting inmates and staff in facilities, please refer to the Department’s COVID-19 Data updates, which provide up-to-date recovery information alongside cumulative cases,” Vernarelli wrote.

As of Jan. 22, the data inconsistencies on the state’s Open Portal dataset have not been corrected.

Asked why the data that the Department of Public Safety and Correctional Services reports for use on the Open Data portal is deemed less trustworthy, department spokeswoman Lt. Latoya Gray said that it isn’t necessarily that it’s inaccurate, but that the datasets are different.

“The congregate housing dashboard is reporting cumulative cases and deaths for staff and inmates for those facilities that currently have active cases, as well as the total historical COVID cases,” Gray wrote.

“It is not a question of accuracy. They are both accurate. However, they are reported at different times,” she said. “The Department’s own biweekly report on its webpage is updated twice a week, and includes more data points.”

“For this reason, we typically defer to what we have most recently posted on our website.”

But considering Williams’ death was not reported on their dashboard earlier this week, perhaps it’s fair to continue to question the accuracy of the department’s reporting mechanism. 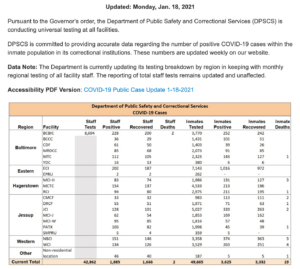 Screenshot from the Department of Public Safety and Correctional Services’ website.

Editor’s note: This story has been updated to include a comment from the University of Maryland, College Park, and to clarify Katie Lawson’s position within the university saystem.