“I was fortunate enough to make it out” in light of the pandemic, Turner Bey explained at a news conference Friday.

Not everyone is so lucky.

Before he left, Turner Bey said that he had a friend who contracted COVID-19 and died in the hospital.

“I’m watching men die in there,” he said tearfully. “Men who I respect ― men I look up to ― all because the staff is taking this as a joke.”

“Despite the COVID pandemic getting progressively worse over the last several months, there has been, still, no meaningful plans in place for keeping our incarcerated population safe,” said Keith Wallington, a state-based strategist for the Justice Policy Institute.

The coalition’s demands include:

The push for release

Dr. Chris Beyrer of Johns Hopkins Bloomberg School of Public Health explained that he and other epidemiologists raised concern for the transmission of COVID-19 in prisons at the pandemic’s start, pushing for decarceration “early and hard.”

“That didn’t happen,” he said. “The numbers of releases have been too small. The crowding has continued.”

In November, Hogan renewed an executive order from the spring allowing inmates within four months of their release date or those 60 and older with home plans and no disciplinary infractions to be released early.

This order doesn’t apply to people convicted of violent or sexual crimes.

“Governor Hogan’s executive order speaks to the fringes of the people that are incarcerated,”  Martina Hazelton, co-founder of the Lifer Family Support Network, explained. “How do you have almost 20,000 people incarcerated and then say, ‘people with violent offenses, this doesn’t pertain to you,’ but that’s 80% of the people?”

Green told the Senate Judicial Proceedings Committee at a briefing earlier this month that 15,487 people have been deflected or released from the department’s custody from March 1, 2020, to Jan. 1 2021. That figure includes a broad range of releases, including people released from pretrial detention, placed on home detention and releases from Baltimore City Central Booking and Intake Center.

About 4,398 of those people were released from prison sentences.

When it comes to congregate living facilities, much of the Hogan administration’s COVID-19 interventions focus on long-term care facilities and nursing homes.

“My loved one who’s in prison is of no less value than someone’s mother sitting in a nursing home,” Hazleton asserted. “And you’re not going to tell me that you’re going to treat them differently and allow them to die. It’s not fair.”

Even with the releases under Hogan’s renewed executive order, inmates and staff members across the state continue to get infected.

As of Monday, the Department of Public Safety and Correctional Services reported confirmed 1,885 cases among staff and 3,625 among inmates.

Since March, 19 inmates and two staff members have died.

“The news is not good,” said Beyrer “Just in the month of December, the number of positive cases among detainees in the state doubled ― doubled ― in one month.”

He called the high rise in the state’s numbers “unacceptable.”

“What that tells you is that the basics of what we’ve been asking for ― decarceration, PPE, sanitation ― not happening,” Beyrer explained. “Insufficient to address this, and this really, unfortunately, looks like an epidemic out of control.” 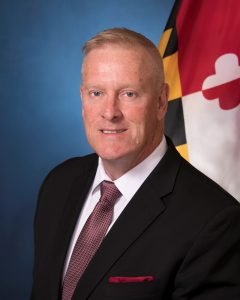 Green told the Senate Judicial Proceedings Committee earlier this month that the department has issued over 600,000 bars of soap and 100,000 facemasks “just among the inmate population, alone.”

But some say they haven’t seen much personal protective equipment at all.

Turner Bey said that Jessup’s warden had issued a memo at the pandemic’s start, telling inmates that they would receive a face mask, face shield and latex gloves, but the shields and gloves were never passed out.

He said that a security officer told the inmates under her charge that they wouldn’t be handing out face shields because officers “may have to mace one of y’all.”

“I was astonished for this woman to say something like that,” Turner Bey said. “The reason that she refused to protect the lives of the 2,000 men at JCI?”

But he did receive a mask from the department: khaki, the same material that uniforms are made from at Maryland Correctional Enterprises, and flimsy ― a few washes rendered them totally spent, he said.

Ultimately, Turner Bey told the press Friday that personal protective equipment isn’t being distributed, and inmates face consequences if they make their own from the materials they have in their cells.

Advocates say that prisoners are struggling to be seen by the parole commission, even when they reach their parole eligibility dates.

“Obviously, one of the safest ways ― one of the simplest ways ― that we can decarcerate is to release the men and women who are in prison who are parole-eligible,” said Eileen Siple. “But our parole system seems to be breaking down during this time ― at least that’s been my experience.”

Siple’s son has spent nine years behind bars and became eligible for parole on Jan. 9.

She’s been fighting the parole commission to meet with him since the fall, saying he’s done everything he possibly could to ensure his release.

Siple contacted Maryland’s parole board in November 2020 to ask about when his hearing would be held. She said she was told December, which was pushed to “early January, probably.”

“In fact, one woman I spoke to actually said that all of the routine parole hearings had been backed up at least two months because of COVID,” stated Siple, who said the woman recanted after telling her that she was working with this coalition.

“Now, here we are halfway through January, and the parole board is telling me most likely his hearing will be in early February,” she said, adding that, as of Thursday, nothing had been confirmed.

“It’s frustrating and it’s really disheartening because he’s done everything right and if our prisons are supposed to be designed to help people rehabilitate, he’s done that,” said Siple. “If we take away his goal, then he has nothing left to work for and that’s not fair.”

There are several bills on the table during the 2021 legislative session that may release hundreds of prisoners, including one sponsored by Del. Jazz Lewis (D-Prince George’s) that would allow adults convicted as minors to petition to have their sentences reduced and another sponsored by Sen. Jill P. Carter (D-Baltimore City) and cross-filed by Del. Charlotte Crutchfield (D-Montgomery) that would allow individuals convicted of first-degree murder as minors to have their convictions reviewed. 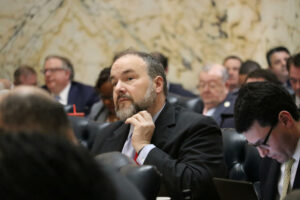 Another bill that would remove the governor from the parole process was introduced by House Judiciary Committee Chairman Luke Clippinger (D-Baltimore City) and Del. Pam Queen (D-Montgomery).

Maryland is one of just a few remaining states that require its governor to sign off on the state parole commission’s recommendations for parole and commutation of life sentences. Should it be enacted, this policy would remove the governor from parole decisions for life sentences.

The bill passed in the House during the 2020 session but died in the Senate due to time restraints related to the pandemic. Iterations of this legislation have cycled through the General Assembly for years.

In spite of the pending legislation, stakeholders say that Hogan needs to take action via executive order to keep the prison population safe as the pandemic presses on.

And he knows exactly how dire the situation is.

Turner Bey wept several times as he recounted the conditions he and his fellow inmates were exposed to, like the tent set up at Jessup Correctional Institution to house inmates infected with COVID-19.

He said that patients are shackled to the bed by one leg and handcuffed on the opposite hand while they’re being treated.

“Your left leg is shackled while your right hand is handcuffed to the bed,” he explained. “And the tents are cold.”

“Why men and women are getting this [in]humane treatment in America in this day and time?” he asked through tears. “Why we must die and we wasn’t given death sentences?”