As lawmakers tackle the digital divide during the 2021 legislative session, a new study shows that more than 500,000 Maryland households don’t currently subscribe to wireline broadband services.

That means about 23% of Maryland households don’t have high-speed, reliable broadband internet access at home, according to the Abell Foundation’s “Disconnected in Maryland” report, which was commissioned by the Community Development Network. Additionally, 18% of all Maryland households don’t have a laptop or desktop computer at home, according to the report.

The study’s author, John B. Horrigan, noted that of the roughly 520,000 households that don’t have wireline broadband service at home, 40% are African American ― underscoring the digital divide’s disparate impact on people of color.

Income is another important factor in broadband access. Horrigan told Maryland Matters that low-income households also lag behind in terms of having a wired broadband connection at home.

“Poverty really hits hard statewide when it comes to the digital divide,” Horrigan said, “with large numbers of low-income households not having that wireline broadband connection.”

Horrigan emphasized the importance of having a wired, high-speed internet connection at home. In the study, he wrote that satellite service “generally does not have the technical capabilities for robust use,” and that other wired internet services, like those that use telephone networks, usually aren’t fast enough to meet federal broadband requirements.

And although historic broadband expansion efforts have focused largely on rural areas, Horrigan said urban areas are also faced with a broadband access problem. In a 2020 report, he noted that more than a third of households with children in Baltimore didn’t have wired internet at home.

And 8,900 households in Baltimore completely lacked access to broadband internet speeds, meaning at least a smartphone. The city lagged behind the country’s average in terms of broadband access and adoption.

Urban and rural areas often have similar barriers to access, Horrigan said. Affordability and technical know-how are barriers to broadband adoption across the state. Some rural areas also lack the infrastructure to support high-speed wired internet for homes, meaning closing the digital divide is even more expensive and difficult.

Access to high-speed, reliable internet at home is more important now than ever before, Horrigan said. The pandemic led to an unprecedented surge in remote work, online schooling and telehealth appointments ― a trend that Horrigan thinks will remain even after COVID-19 subsides.

“The new normal won’t just be dialing back to 2018,” Horrigan said.

Broadband and the General Assembly

State and local officials alike have cited broadband access as a top priority for 2021, although exactly how the legislature will combat the digital divide is still up in the air.

That digital inclusion office would be required to develop a plan by July 1, 2022 to ensure all Marylanders “have the ability to connect to reliable broadband internet” by the end of 2029.

Hogan has funneled millions in state funding toward broadband expansion during his time in office, and created the Office of Rural Broadband in 2017.

A recently-passed federal stimulus package included $7 billion nationwide for increased broadband access, including $3.2 billion in emergency funding for low-income families’ access through the FCC. Maryland is set to receive $58 million for broadband expansion as part of that stimulus.

Horrigan said public-private partnerships will be important to bridging Maryland’s digital divide. He said carriers that offer affordable wireline broadband plans often struggle to get the word out, and often partner with local institutions like schools and public libraries to connect with low-income residents. 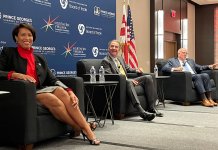