Thomas V. Mike Miller Jr., the longest serving state Senate president in Maryland history ― and in the United States ― died Friday afternoon at his home in Chesapeake Beach following a long battle with prostate cancer. He was 78.

The Miller family released the following statement shortly after 5 p.m.:

“At 4:25PM this afternoon, Maryland Senate President Emeritus Thomas V. Mike Miller, Jr. passed away peacefully at his home, surrounded by loved ones. He was 78 years old.

Miller was the oldest of 10 children, and began working at his family’s grocery and liquor store in Clinton when he was 10 years old. The store, B.K. Miller’s, which was started by his grandfather, remains to this day.

Miller was a University of Maryland graduate and remained a passionate booster of the College Park campus ― and its sports teams ― until his dying day. He also attended the University of Maryland Law School, hanging a shingle in Clinton and then in Dunkirk. His legal practice and influence, especially in Prince George’s County and Southern Maryland, grew exponentially as his political career blossomed.

Miller described his mother as a Franklin Roosevelt Democrat and his father as a conservative Republican, and his own political makeup seemed like a combination of the two.

After years as a political volunteer, his own extraordinary political career began in 1970 with his election to the Maryland House of Delegates from a district in southern Prince George’s County. Four years later, he was elected to the state Senate ― where he served until Dec. 23, 2020.

Miller rose quickly in Senate leadership, serving as chairman of the Judicial Proceedings Committee from 1983 to 1986. He became Senate president at the beginning of 1987, a post he held until the fall of 2019 ― serving alongside six governors and four House speakers, fighting with some more than others. 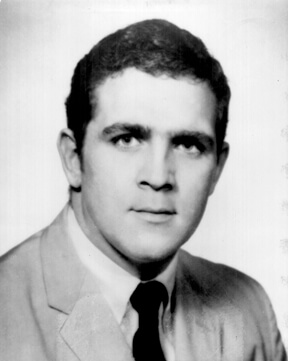 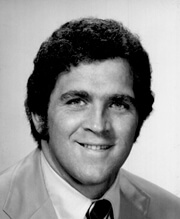 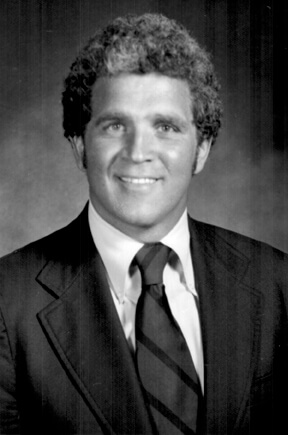 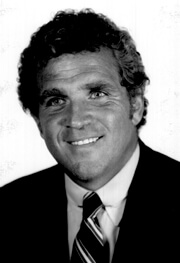 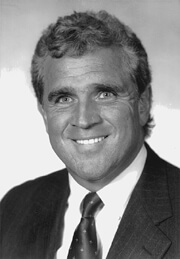 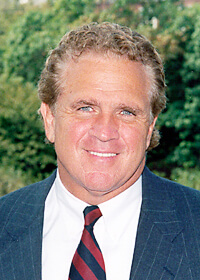 “It is impossible to think of the Maryland Senate and not think of Mike ― not just because of his historical longevity ― but because each member of the Senate has his or her own Mike story,” Sen. Bill Ferguson (D-Baltimore City), the man who succeeded Miller as Senate president in 2019, said in a statement. “Whether it’s the Senator who he quietly consoled through family matters, the Senator who he mentored to compromise and pass legislation, or those who experienced the personal care of Mike to truly listen to their concerns. There are thousands of former Senators, Delegates, staffers, and constituents in the 27th District that he has impacted for the better, and who each have their own Mike Miller story. I expect we’ll hear many of them in the days and weeks ahead, and I hope the public will listen and get a glimpse of the impact Mike made.”

‘A giant and a legend’

Miller was a man of his times and the political environment in which he grew up. He wasn’t an ideologue but shepherded through countless bills that impacted every aspect of life in Maryland. As times changed, he showed an uncanny ability to know where the Senate Democratic Caucus was and where it was headed.

Miller survived a coup attempt in 2000, engineered by Republicans and rogue Democrats, and his stature within his chamber was so powerful that the Senate’s new office building in Annapolis was named for him in 2001 ― even though he was still living and serving. 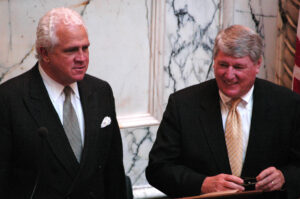 Miller continued to wield enormous influence for the rest of his tenure as Senate president, serving in tandem with the late speaker Michael E. Busch (D-Anne Arundel), the longest-serving House speaker in Maryland history, from 2003 until Busch’s death in 2019. It was an unprecedented period of shared power and stability.

“I am deeply saddened to hear of the loss of my friend, colleague and trusted advisor, Senator Thomas V. Mike Miller, Jr.,” she said in a statement. “Mike was a giant and a legend, who served the people of Maryland for a half century. Anyone, anywhere with a sense of history or politics will know the name Mike Miller.

“I was fortunate to have received his counsel and advice when I became Speaker. He was as kind and generous as he was powerful: a combination that leads to a once-in-a-generation leader and statesman who we can all emulate. My thoughts and prayers are with Patti and his entire family. He will be sorely missed.” 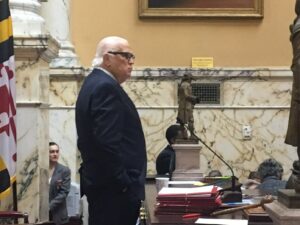 Miller announced at the beginning of the 2019 session that he was suffering from stage 4 prostate cancer. He retained the gavel, but appeared weak at times ― though sound of mind. In the fall of 2019, he announced that he would step down as president.

After quickly securing the votes to succeed Miller, Ferguson announced that his predecessor would be given the title of Senate President Emeritus, along with certain privileges. Early last year, a portrait of Miller was hung in the Senate chamber, not far from where his new desk was.

As recently as early December, Miller expressed the hope that he could return to Annapolis for the 2021 session.

“I haven’t missed a meeting yet and I fully participate as I’m able to,” he said in an interview with Maryland Matters at the time. “I’m going to do what I do as long as my health says I can do it.”

But the physical pain became too great, and he announced on Dec. 23 that he would resign from the Senate immediately.

“Stepping down from the Senate was one of the most difficult decisions of Mike’s life,” Ferguson said. “He wanted to be with his colleagues serving the people of the 27th District, but the physical burden was too much to bear. So, Senator Miller ― demonstrating what he had preached so often ― stepped down to make sure his district could have the best representation possible. This may have seemed like a small sacrifice to the outside world, but anybody who knew Mike knew the decision did not come easy. It came only from love for the Senate, the State of Maryland, and its people.”

Miller’s Senate seat was just filled Wednesday, the first day of the General Assembly session, by former Del. Michael A. Jackson (D), a former Prince George’s County sheriff ― and the man Miller wanted to succeed him.

Miller held close friendships with politicians in higher office ― he was close with former President Bill Clinton and former Secretary of State Hillary Clinton ― but preferred his niche in the Senate, mentoring new lawmakers and overseeing the historical artifacts and exhibits in the State House complex.

Bill Clinton, who spoke at the Maryland State House twice during his presidency, met Miller at a legislative conference in the 1980’s and later joked that when he realized how big Miller’s family was, he realized it would be politically beneficial to befriend him ahead of his 1992 White House bid.

Clinton also put in a surprise appearance in Annapolis in 2019, at a dinner for former Maryland senators, to pay tribute to his old friend, who had disclosed his cancer diagnosis just a few months earlier.

“As the longest-serving state senate leader in Maryland and US history, my friend Mike Miller had an amazing ability to get things done,” Clinton said in a tweet on Friday night. “He was also fiercely loyal. If he had your back, you never had to look over your shoulder. My thoughts are with Patti and the entire family.”

Republicans also treasured Miller’s friendship and guidance, even as they sparred with him politically.

“On behalf of our members, we offer our most sincere condolences and prayers to Mike Miller’s family, friends and loved ones,” Senate Minority Leader Bryan W. Simonaire (R-Anne Arundel) said Friday night. “We share their grief and immense sense of loss.

“Senate President Emeritus Mike Miller was larger than life. He was a master politician, statesman, avid student of history, mentor and friend. Even though we clashed and passionately disagreed on issues, there was never a doubt that he was doing what he thought was best for the people of Maryland.”

In a 2017 interview, Miller said he was unaware of a move to name the new Senate building in Annapolis after him as it was built and would have objected if given the chance. Nevertheless, he kept a framed resolution of the naming in his home.

A student of history and deeply sentimental, Miller’s home library was filled with more than 5,000 volumes, sorted by subject and historical era. It was nearly impossible to hold a conversation with Miller without escaping a history lesson.

But almost every conversation was also laced with levity and profanity.

Asked in 2017 if he ever wanted to write a book about his own life, Miller responded with trademark humor: “I do, except I know all the good, the bad and the ugly. Some of the ugly ― they’re still alive.”

Gov. Lawrence J. Hogan Jr. (R) ordered that all state flags be flown at half-staff in Miller’s honor, until the former senator’s internment.

“Maryland has lost one of its most revered leaders, and I have lost a dear lifelong friend,” said Hogan, who first met Miller in the 1960’s.

“Serving the people of our great state was Mike Miller’s life’s work, and he did so with unrelenting passion and courage for a remarkable 50 years. Even as he waged a hard-fought battle with cancer, I was blessed to continue to benefit from Mike’s wisdom and trademark humor. He was, in every sense, a lion of the Senate.

“The First Lady and I extend our most heartfelt condolences to President Miller’s wife, Patti, their five children and 15 grandchildren, his Senate colleagues, and all who loved him.”