On the first day of the Maryland General Assembly’s 442th session, Gov. Lawrence J. Hogan Jr. (R) and Democratic leaders of the legislature pledged to work collaboratively on shared priorities — economic relief for needy residents, boosting distribution of the COVID-19 vaccine, and aid for struggling businesses chief among them.

But the outlines of differing policy preferences and timetables for action emerged even before lawmakers formally convened at midday in Annapolis.

In a live-streamed Wednesday interview with The Daily Record, Hogan (R) urged the Assembly to take up his recently-unveiled $1 billion relief plan immediately. Moments later, the leaders of the state Senate and House of Delegates signaled they would spend at least the first couple weeks of the session crafting their own multi-pronged package.

Similarly, lawmakers said they intended to make good on a long-held pledge to override Hogan’s veto of the Blueprint for Maryland’s Future, a bill to dramatically boost education spending, despite the governor’s assertion that doing so would be “one of the biggest mistakes” the legislature has ever made.

The promises to work together — and the early outlines of disagreement — occurred on an opening day like none in state history. 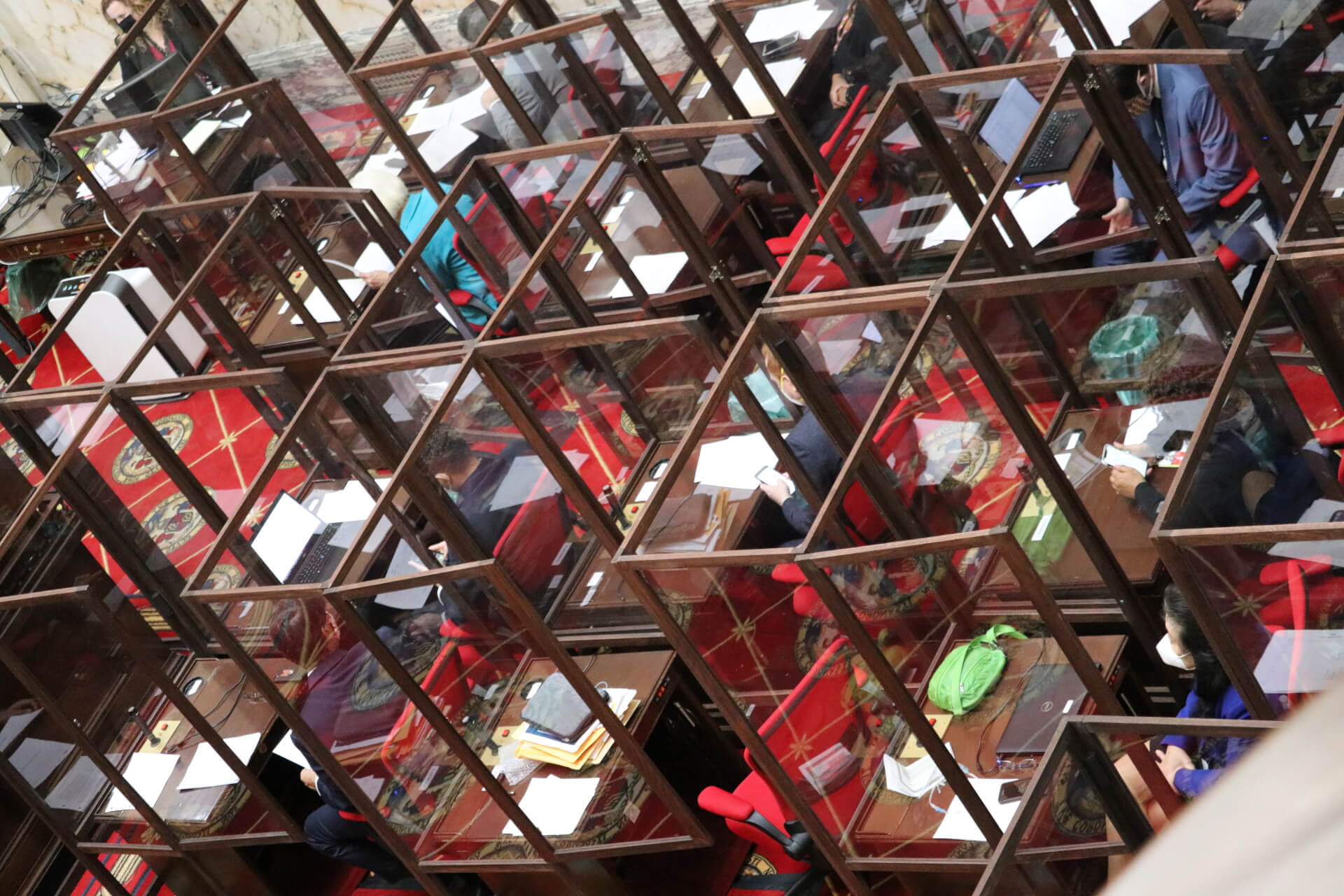 The Senate floor as seen from one of the galleries above. Photo by Danielle E. Gaines.

The joviality that accompanies opening day sessions was gone. There were no squirming babies in the House or Senate chamber, fidgeting children hoping to escape fancy clothes, or spouses. There was no back-slapping and there were no receptions.

Forearm-grabbing lobbyists were almost nowhere to be seen, and the galleries were empty, except for a small number of socially distanced journalists.

The hearty laugh and larger-than-life presence of Thomas V. Mike Miller Jr., whose history-shaping 50-year run as a legislator ended in December, was also absent.

In the Senate, lawmakers sat at desks that had plexiglass partitions with swinging half-doors. Staff also sat in isolation booths that had been constructed over the interim. The proceedings were live-streamed to a public that was otherwise shut out of the State House.

Around State Circle, security was tighter than normal, a response to online threats of violence against state capitols in the wake of last week’s insurrection at the U.S. Capitol.

“Over the next 90 days, we have an unbelievable opportunity to truly change destiny,” he said. “It’s going to take very, very tough conversations. It’s going to take creative problem-solving, long hours, and working across the aisle in ways and spaces and formats that you have never used before.”

Before Jones spoke, House Majority Leader Eric G. Luedtke (D-Montgomery) read the invocation on behalf of Del. Samuel I. Rosenberg (D-Baltimore City), who traditionally delivers the prayer on the opening day of the legislative session, but was one of more than 40 House members who did not attend the opening ceremony.

“Some issues have come to the forefront, like our commitment to racial and economic justice” Luedtke continued. “As we work together to address these and other challenges in the days ahead, may we remain committed to the people who sent us here to make policy on their behalf.” 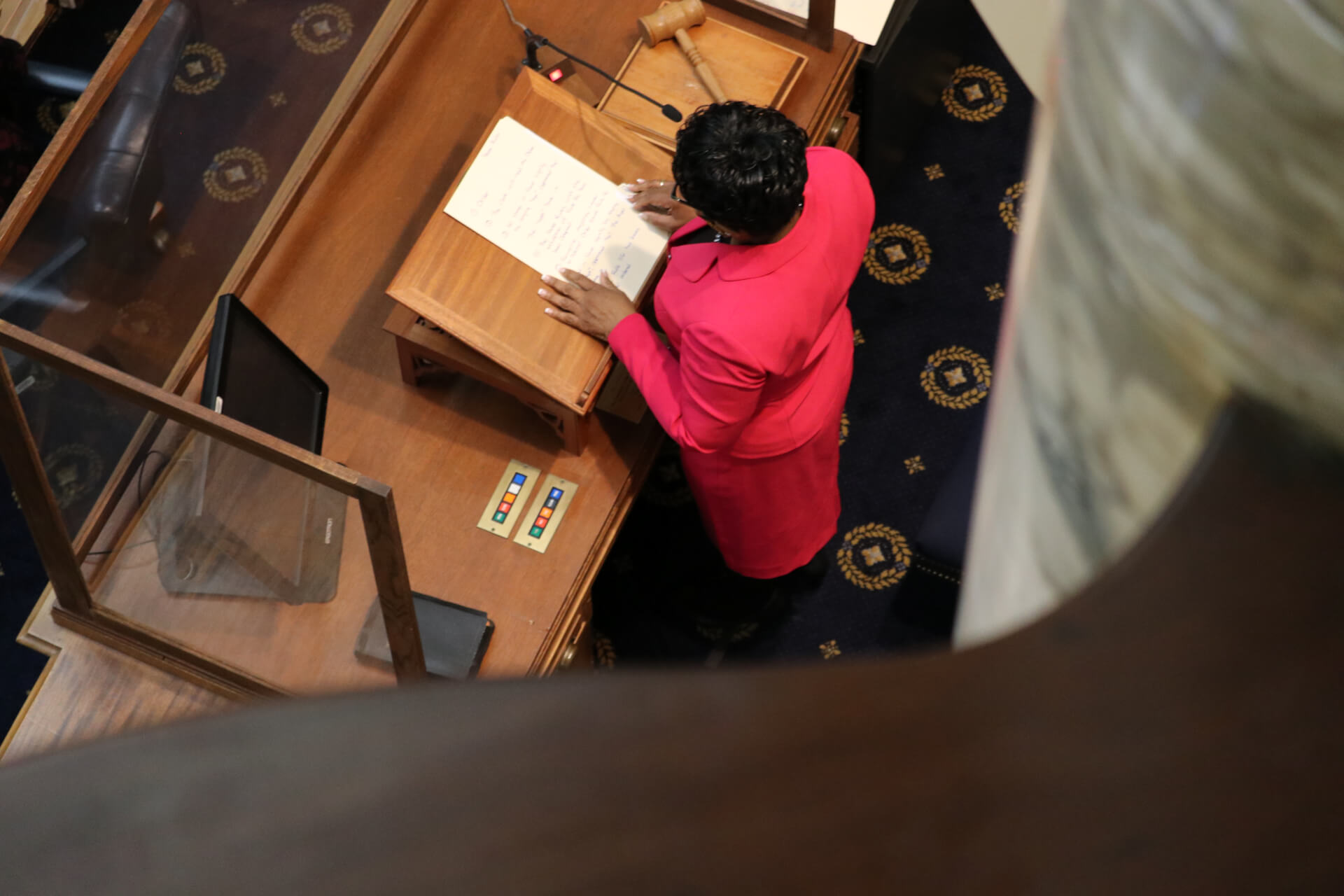 “I’m going to spare you of a speech, I just want to thank each and every one of you and we’ve got the people’s business to do, so let’s get started,” Jones said to applause.

The pandemic yielded some unusual seating arrangements in the House chamber: Del. Tony Bridges (D-Baltimore City) sat in a tall chair — no desk — in a back corner, while 14 of his colleagues were spaced out in the public gallery above.

A limited number of House lawmakers — enough for a quorum to start the session and make necessary rule changes — were on hand for opening day.

At one point during the short House floor session, a small group of Republican delegates assembled outside, wanting to take part in the proceedings. House aides arranged for them to come through the chamber in a single-file line and raise a thumbs-up or thumbs-down on the rule changes.

“We were told not to show up, but we were upset about that, so we wanted to be recognized that we were here to do our job,” Del. April Rose (R-Carroll) said.

The changes to the rules will allow roughly half of the House chamber to sit in an annex created in the House office building. The make-up of the seating arrangement was drawn by lottery and Republicans are present in both chambers at the same ratio.

While members in the annex will be able to vote on and debate measures on the floor in real time, via video, there will be something of a hierarchy in that auxiliary room, with Speaker Pro Tem Sheree Sample-Hughes (D-Lower Shore) presiding and committee vice chairs sitting in the front row. Lawmakers who want to speak will not be able to do so from their desks, but will go to a protected area that looks a little like an old phone booth. 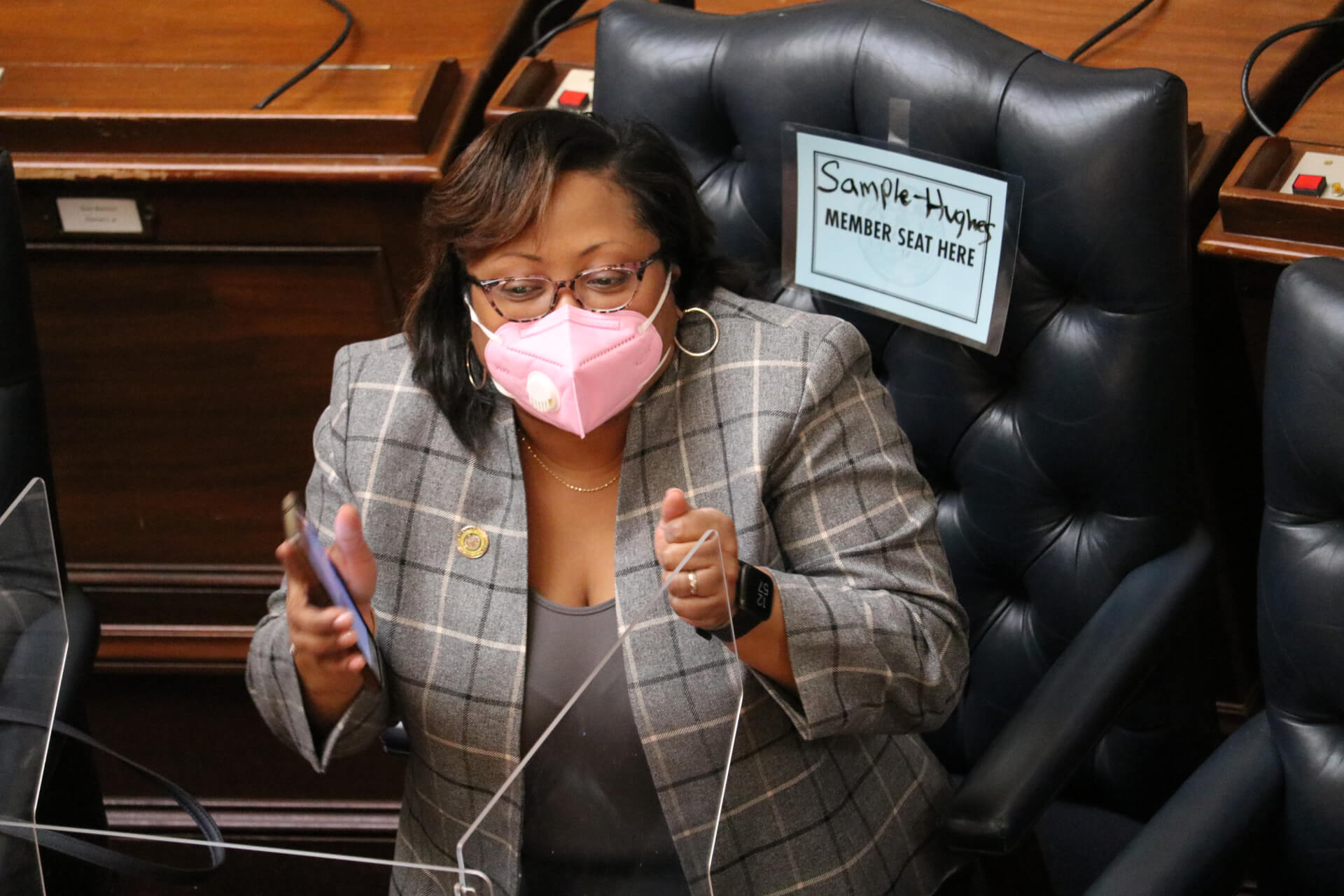 House Speaker Pro Tem Sheree Sample-Hughes (D-Lower Shore) will preside over the “chamber annex” in the weeks ahead. Photo by Danielle E. Gaines.

Even as dramatic measures are being taken to keep members safe and socially distanced as the coronavirus continues to rage, state officials are also mindful of the heightened security threat in Annapolis.

“The confluence of events in which we are operating – the pandemic, the threats on democracy, the health precautions that we have to take – it doesn’t feel like anything I ever imagined,” Ferguson told reporters virtually after the first floor session had ended.

Hogan, who faulted federal security officials for a “terrible lack of preparation” in the lead-up to last week’s riot in Washington, D.C., said “we’re taking every precaution we can to make sure that that does not happen here in our State House.”

“While we’re not expecting that kind of a situation, we’re prepared for whatever eventuality might come up, and we’re going to try to keep people safe,” Hogan said during The Daily Record’s “Eye on Annapolis” Summit, which is held annually on the first day of session. “We’re going to keep everybody from causing any trouble.”

Hogan’s $1 billion relief plan would use a mix of targeted tax cuts and taps a portion of the state’s rainy day fund to aid struggling families and small businesses. It would offer stimulus checks to Marylanders who qualified for the Earned Income Tax Credit in 2019 or 2020. The payouts would amount to $450 for individuals and $750 for families, with no application needed.

Hogan’s stimulus package would provide $180 million in tax relief for unemployed residents by repealing all state and local income taxes on unemployment benefits. It would also allow small businesses to keep up to $12,000 in sales tax over the next four months, amounting to $300 million statewide.

Legislative leaders have yet to release their full relief plans, but they have signaled that they are looking for more robust spending, and also want to help renters on the verge of eviction, homeowners on the verge of foreclosure, and Marylanders struggling to pay their utility bills.

They have also committed to enact police reform, ban chokeholds and no-knock warrants and repeal the Law Enforcement Officers Bill of Rights.

In the wake of the ongoing public health, governmental, social justice and economic crises the state and nation are facing, the governor said “our normal big legislative package has been slimmed down to a very focused agenda.”

“Our most important piece of legislation is the relief act,” he added. “That’s really the only thing I care about, frankly. … If the legislature passed the budget, passed some relief, I’d call it a huge success and call it a day.”

Jones and Ferguson said they had not seen Hogan’s proposal, and they shrugged off his request to pass it on opening day. “We have a relief package and we’re going to prioritize that,” the speaker said.

“Marylanders are hurting in ways that are unimaginable,” Ferguson added. “We all share the urgency to make sure that we help the most vulnerable Marylanders to be able to get through this crisis.”

The Senate leader said proposals to improve the state’s beleaguered unemployment insurance system would be part of the legislature’s recovery package. 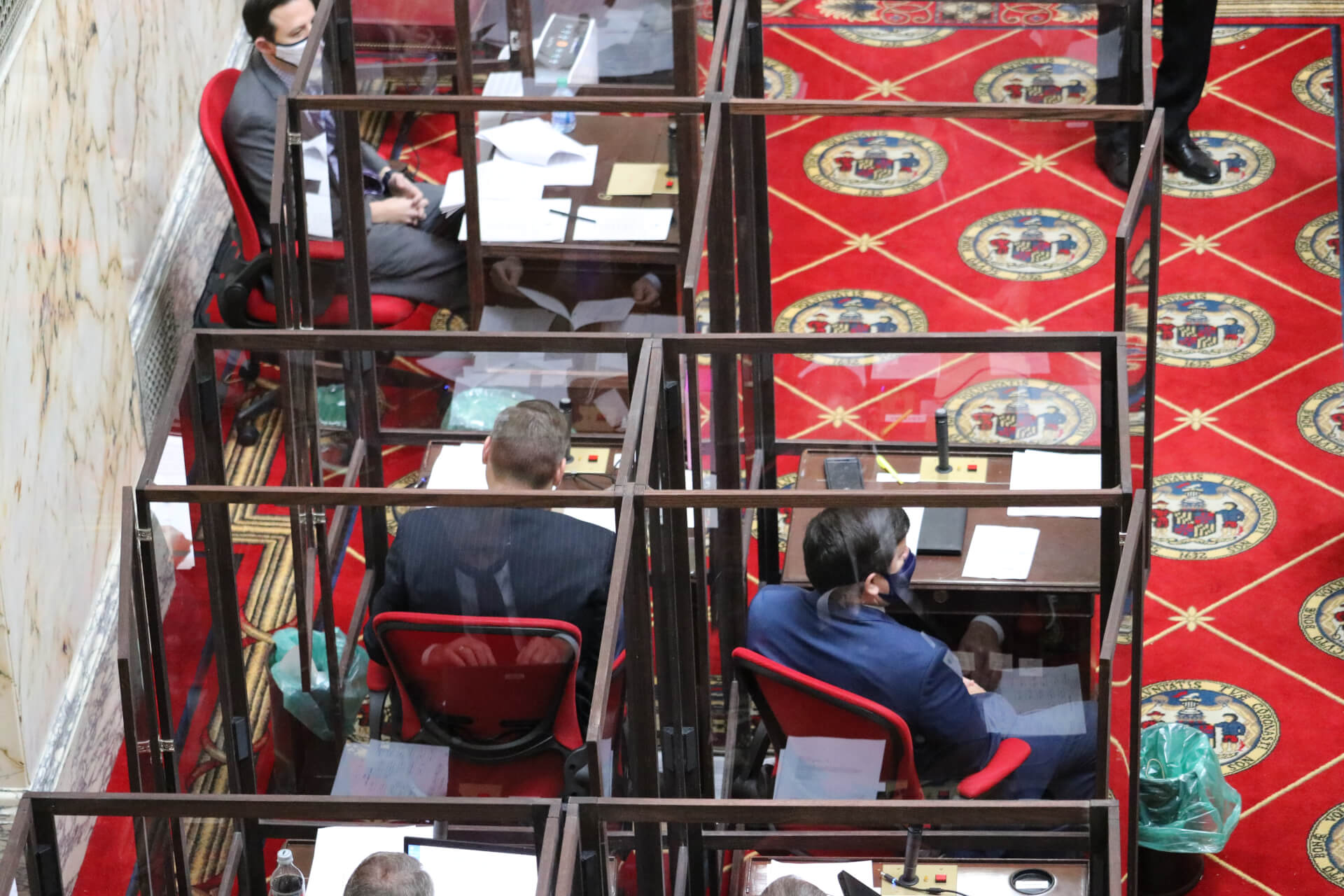 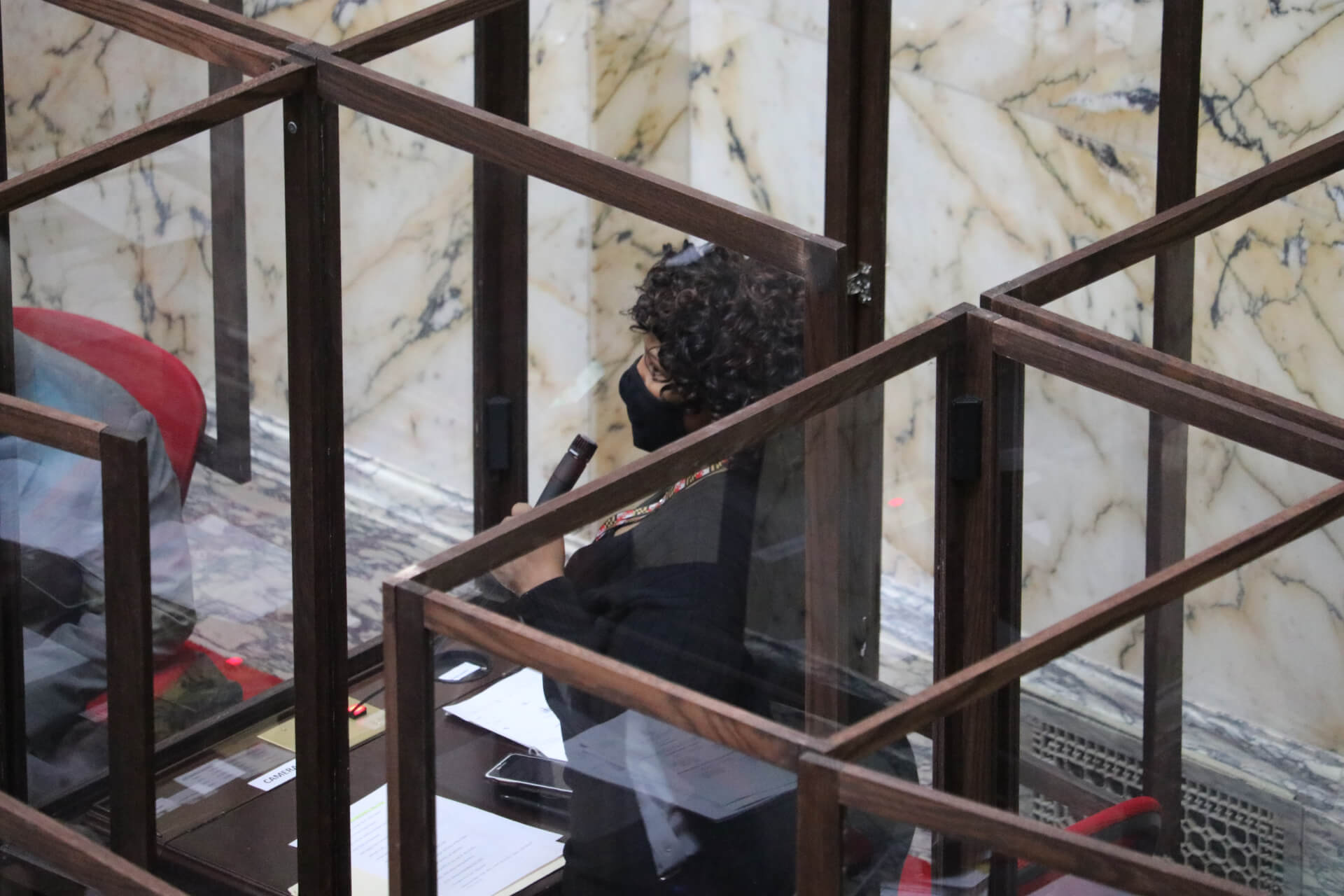 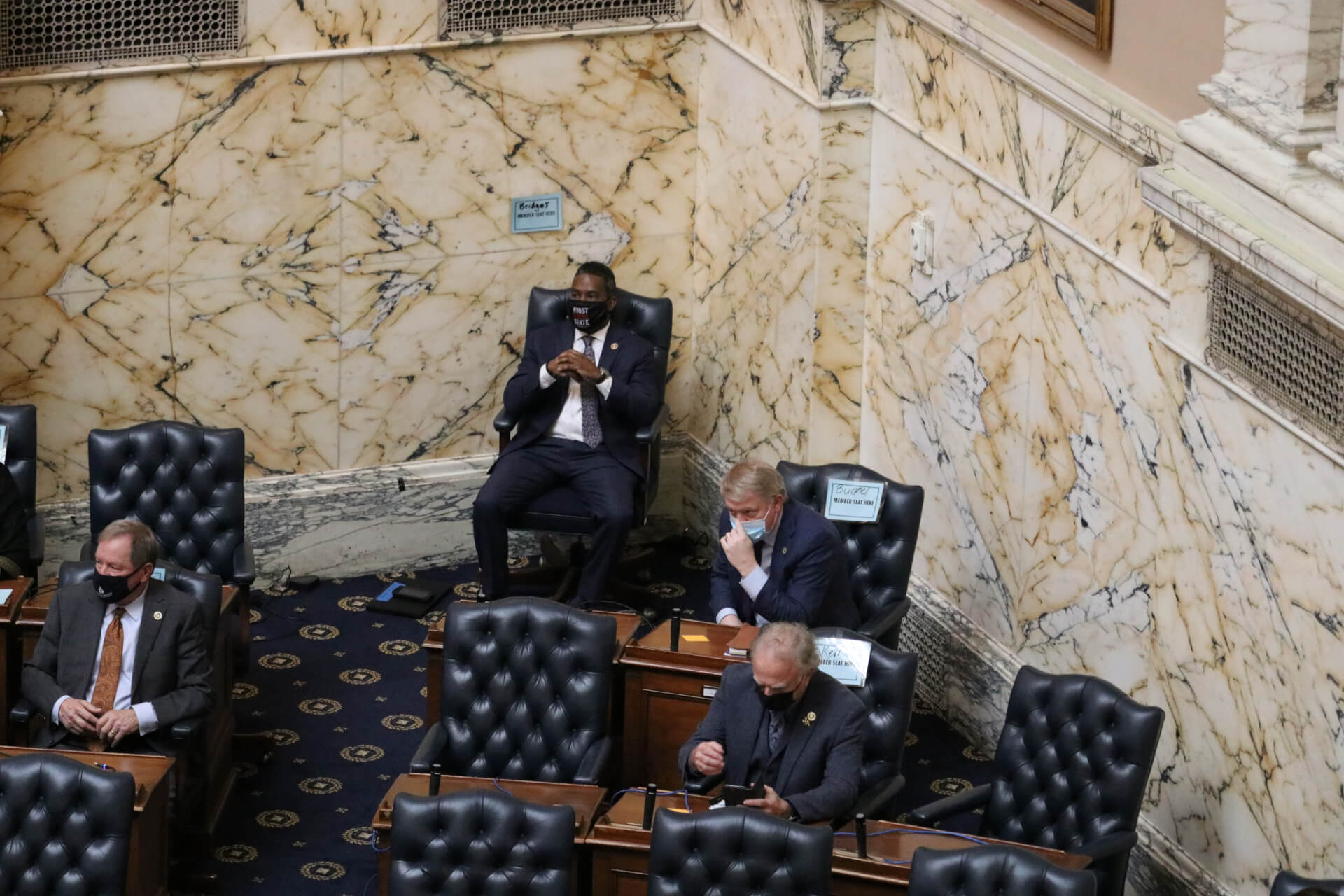 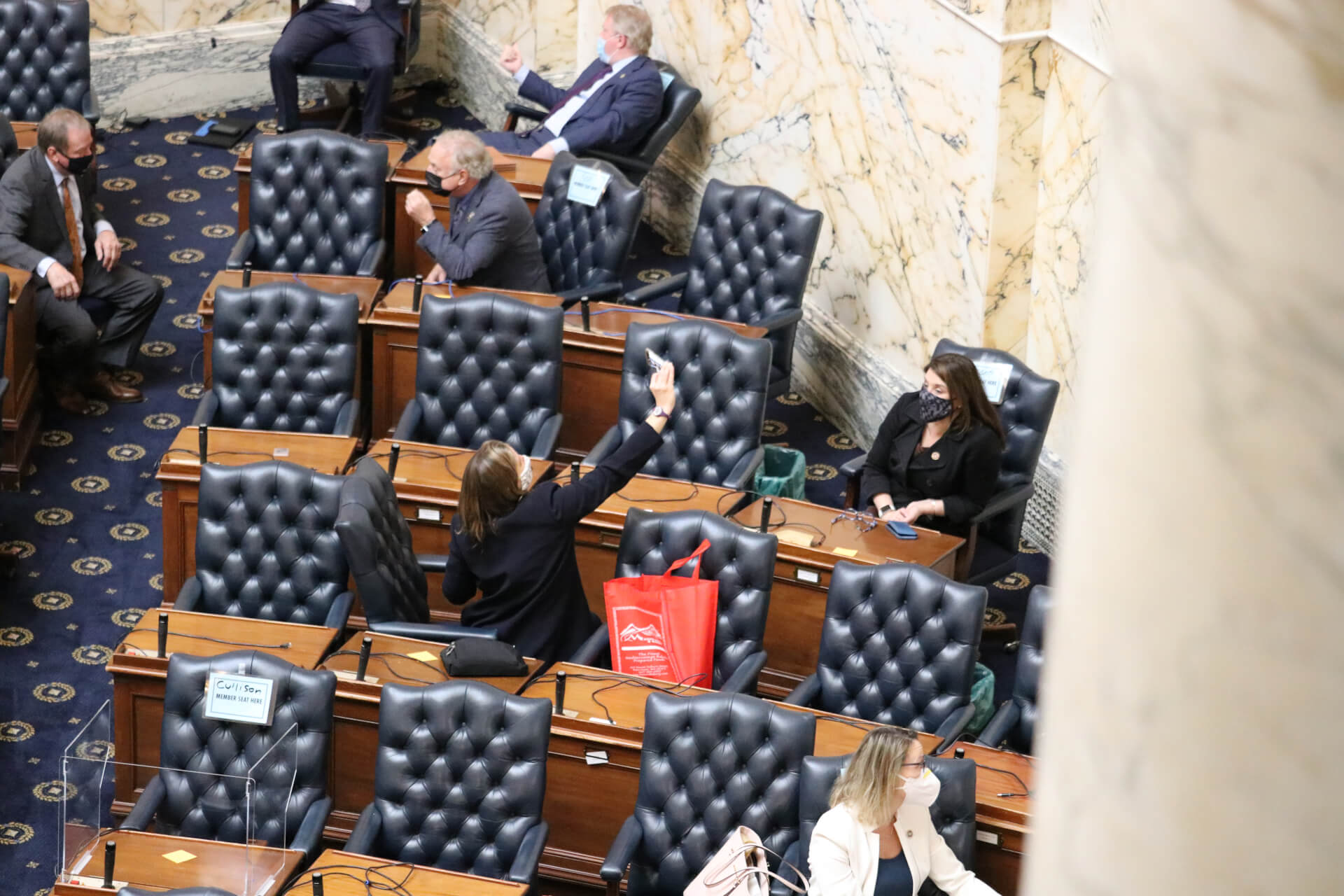 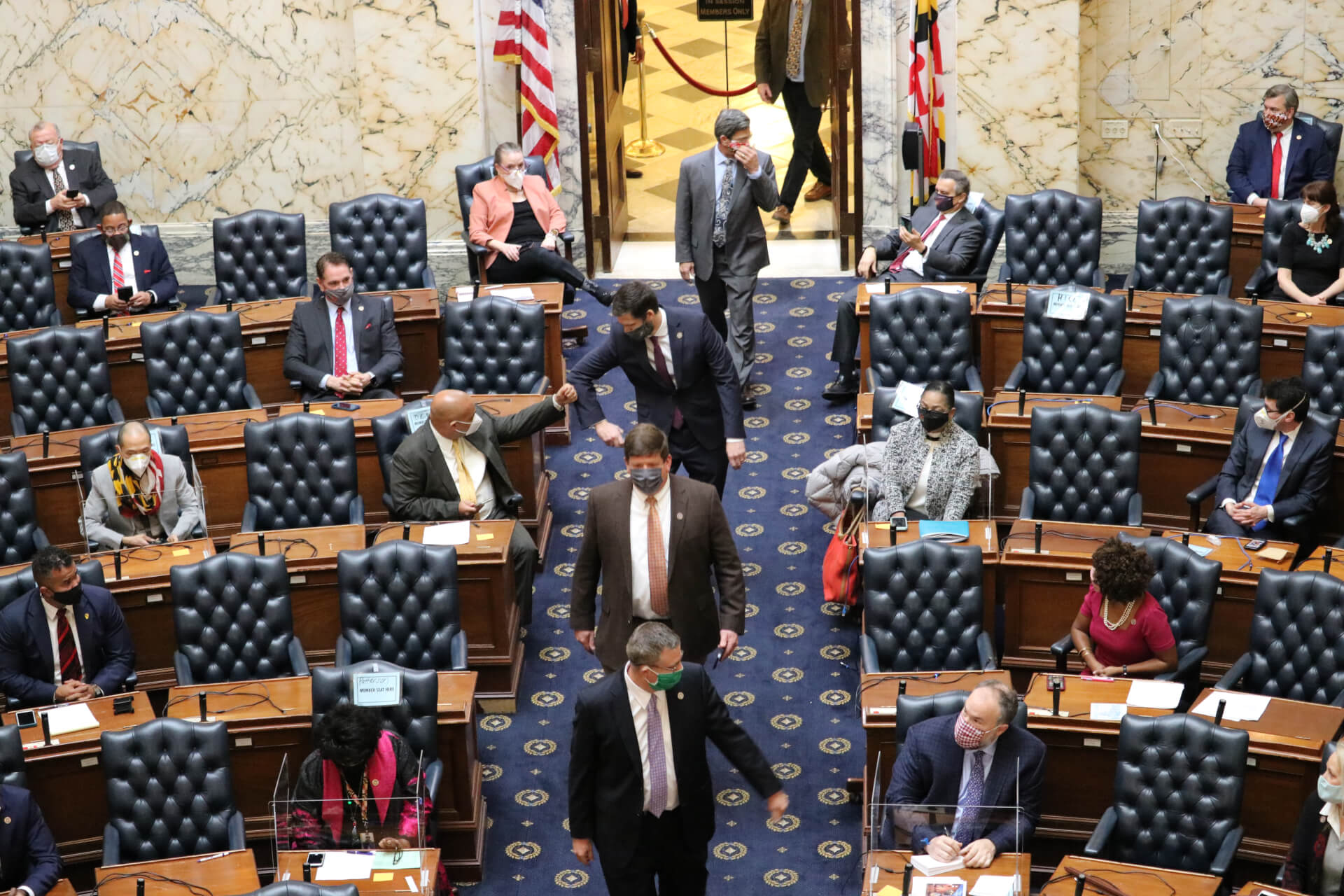 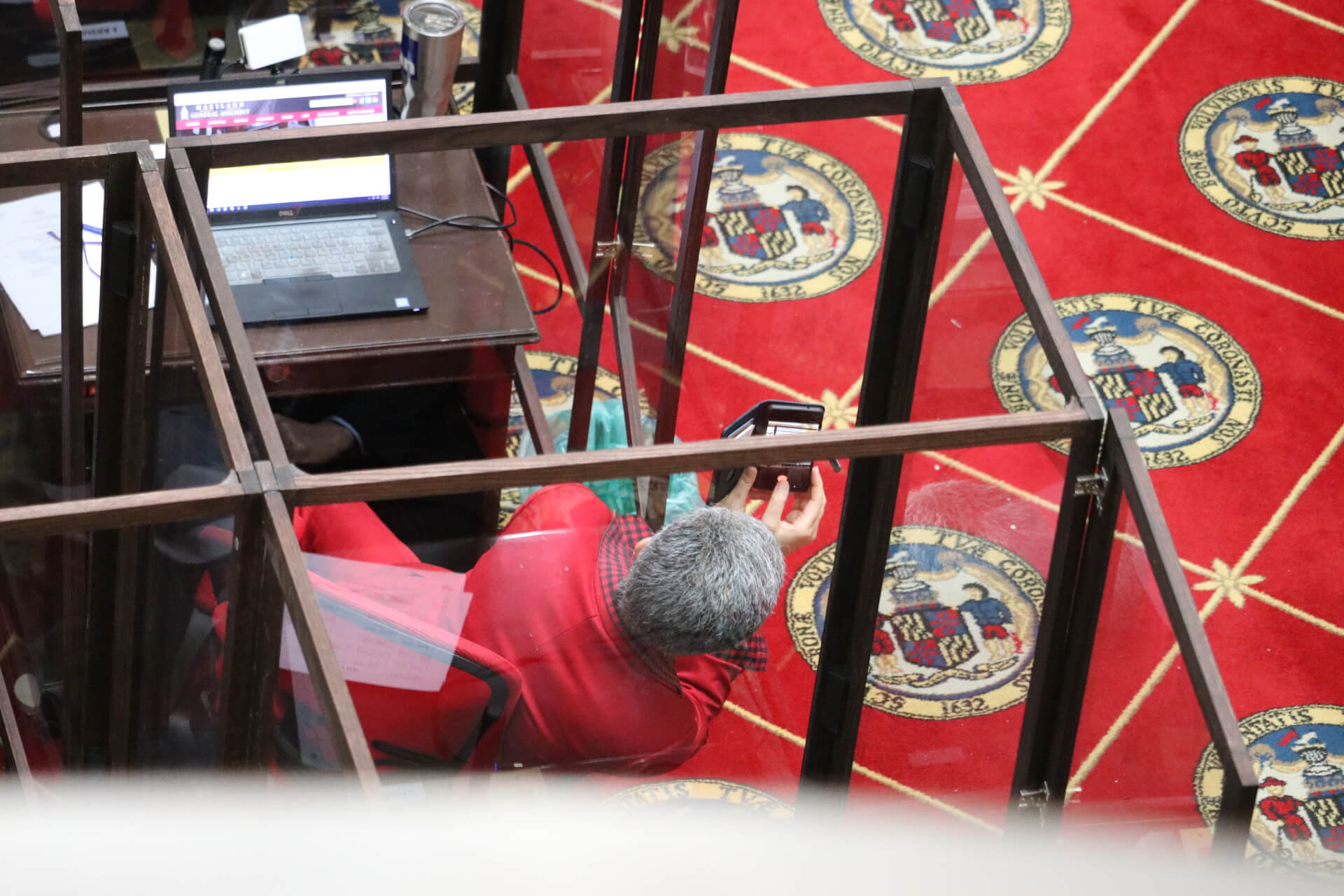 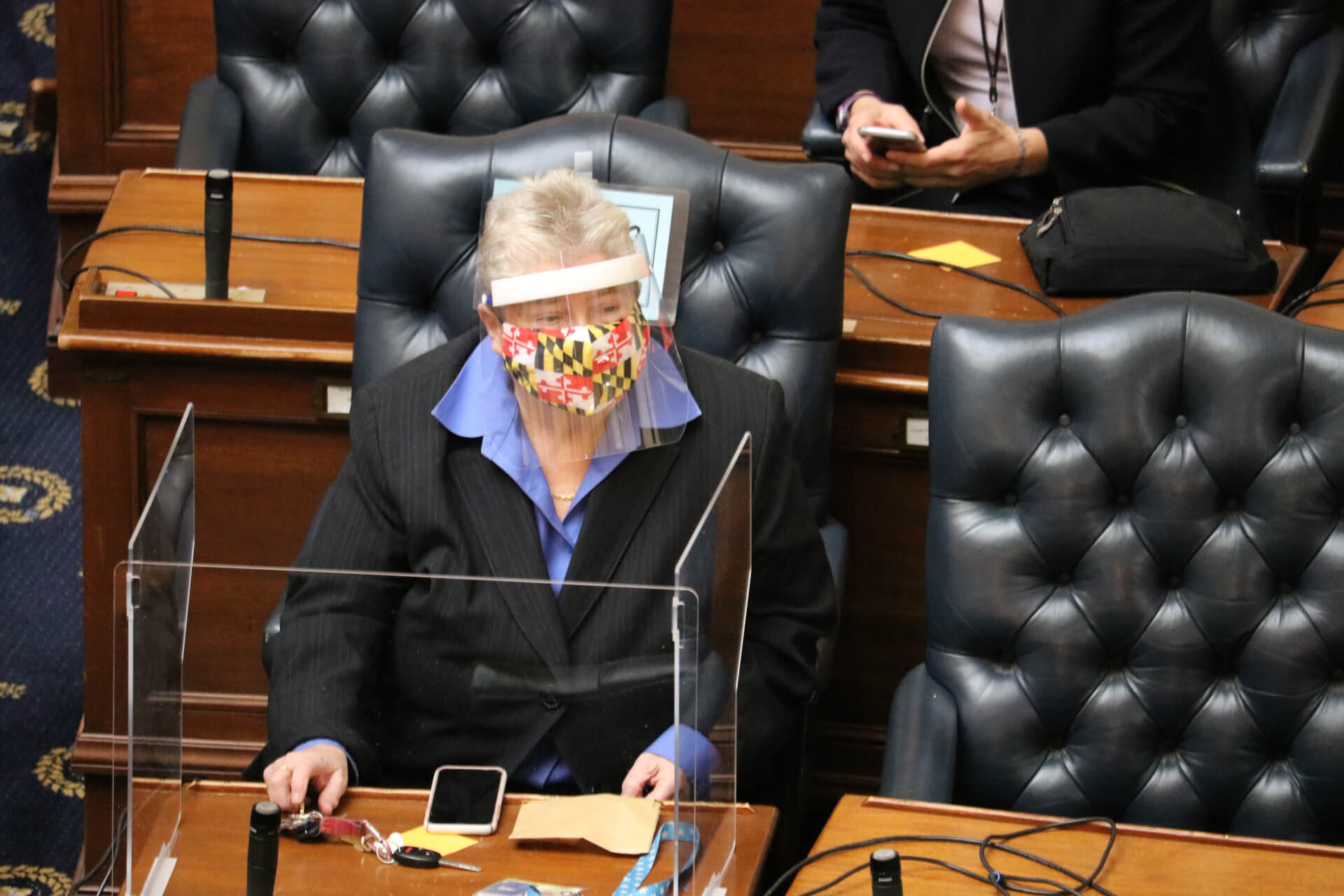 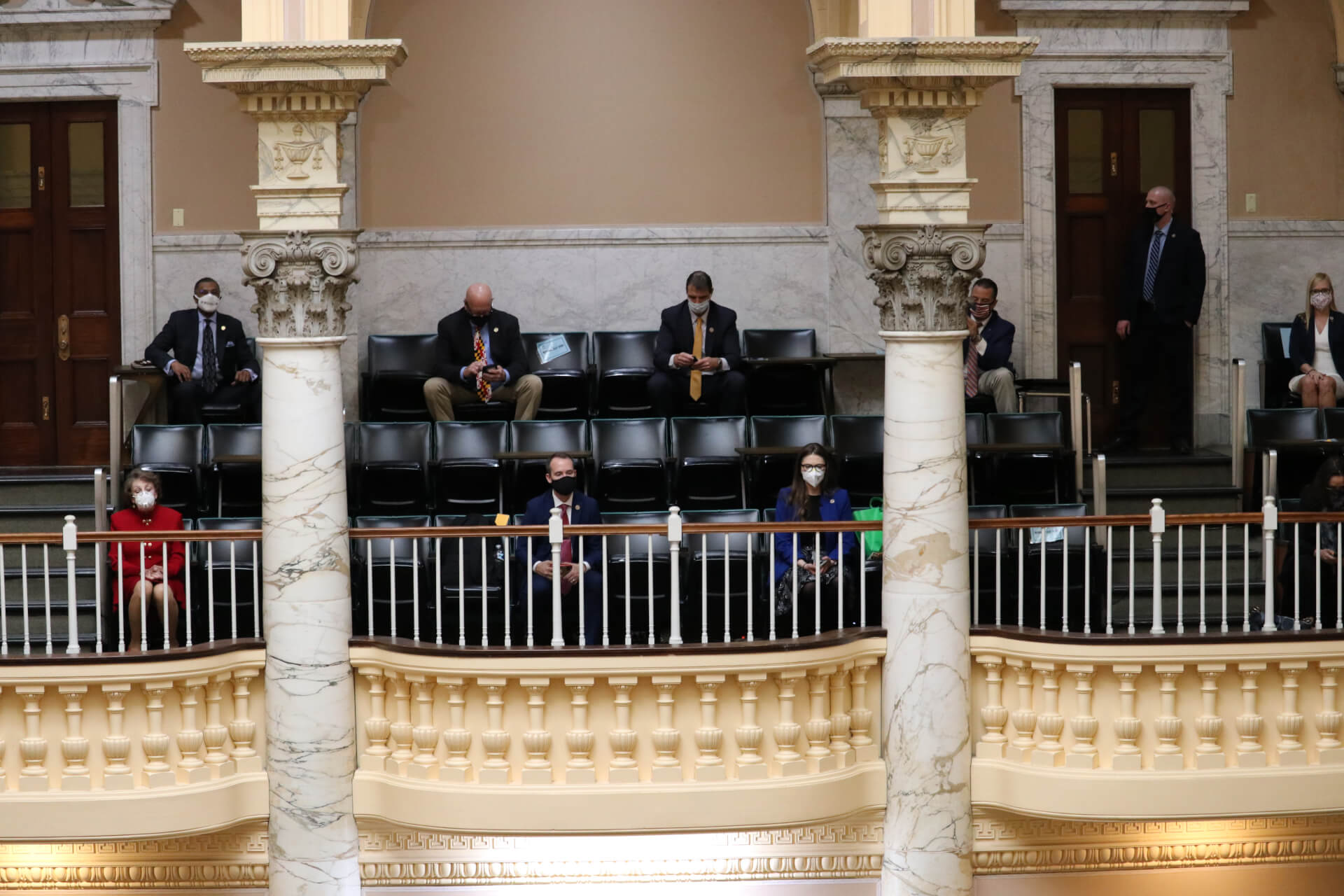 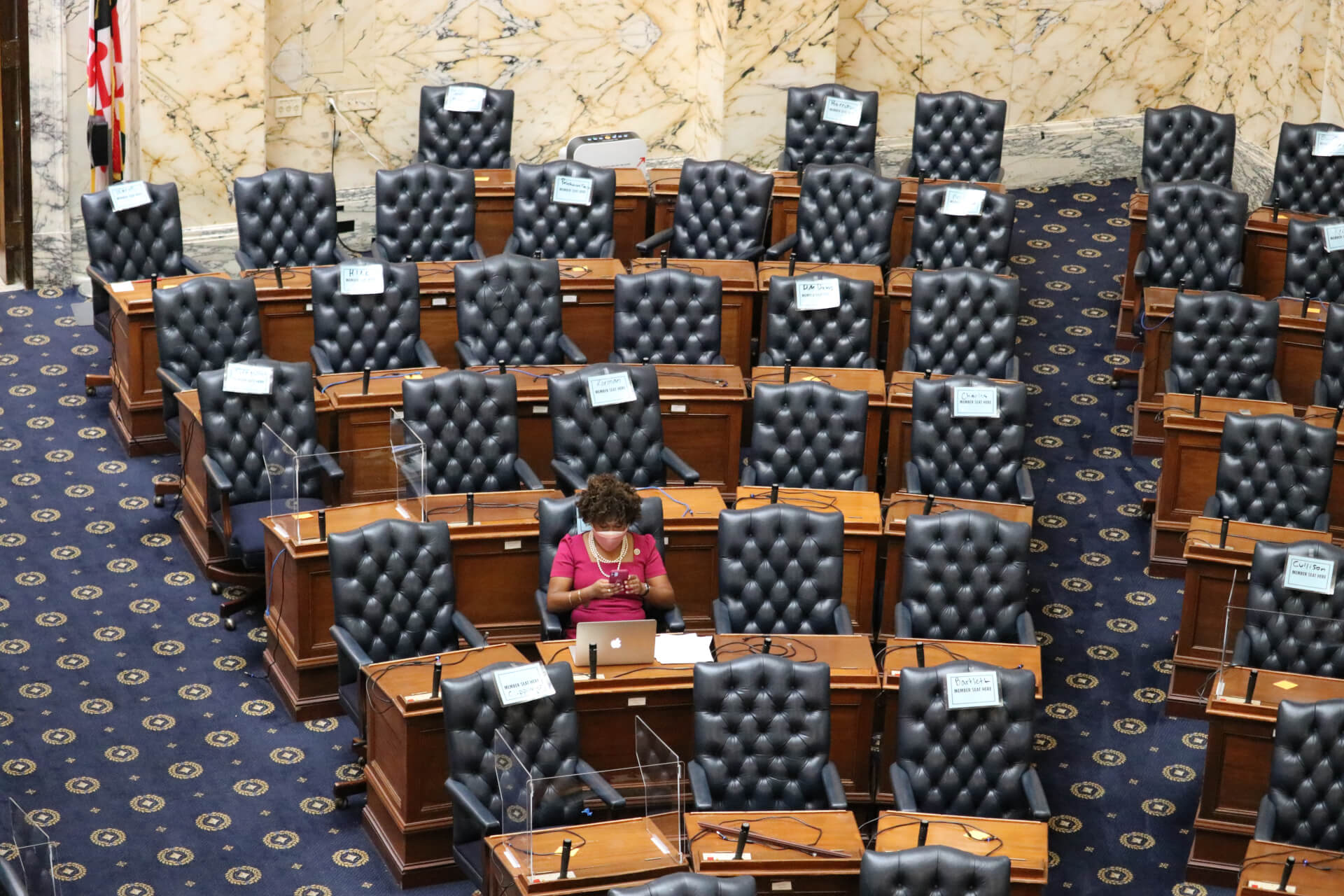 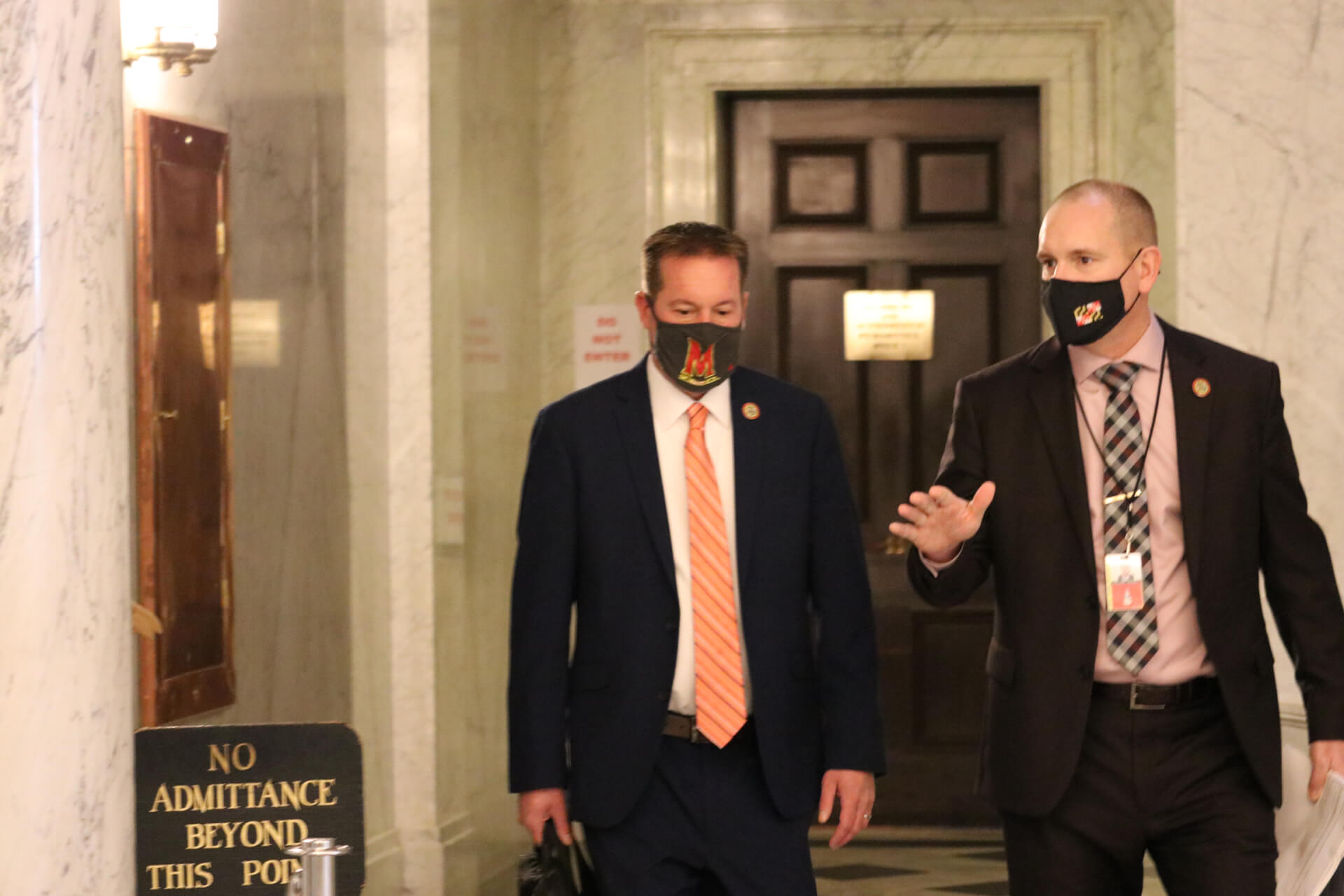 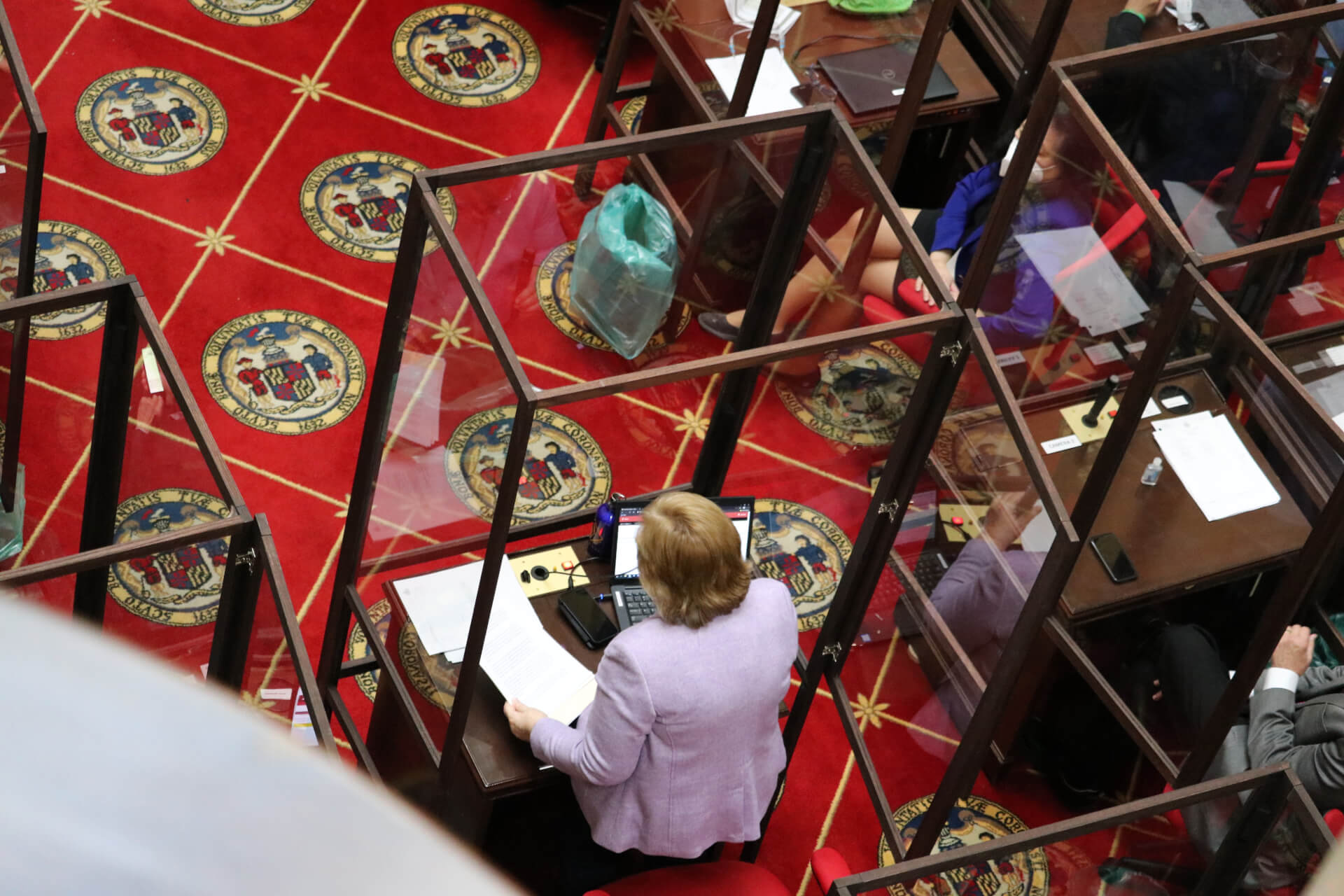 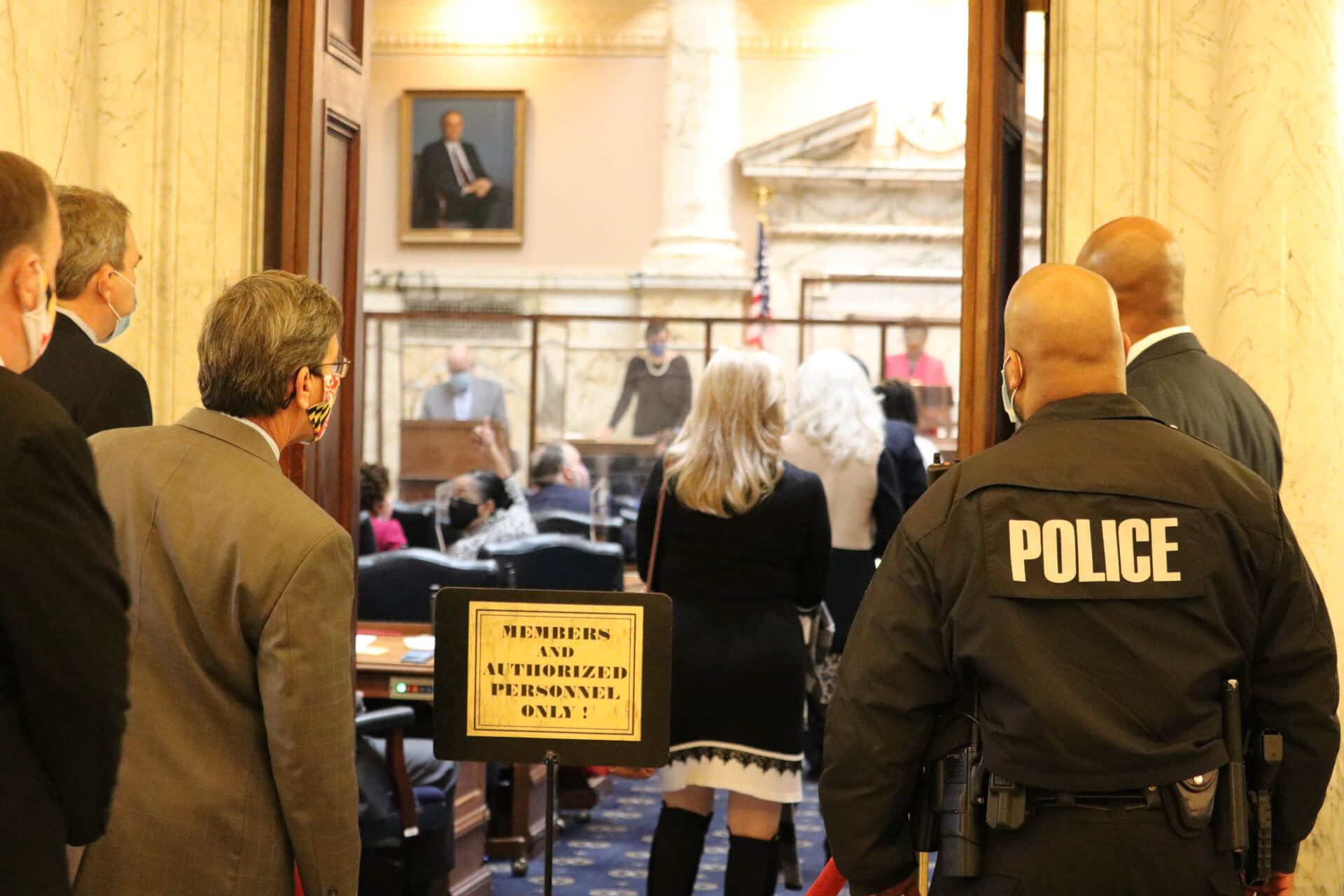 Legislative leaders are determined to override Hogan’s veto of the Blueprint for Maryland’s Future, a measure to pump an additional $4 billion into the state’s public schools system, partially funded by a new tax on digital downloads.

In his morning interview, Hogan acknowledged that the Democratic-led Assembly has the numbers to overturn him — but he warned that doing so would fly in the face of public opinion.

“The legislature does have the power to override those vetoes, [but] I think it would be one of the biggest mistakes they ever made,” Hogan said.

“We have provided record funding into education six years in a row,” Hogan said, “and our budget [for next year] is going to put more money than the legislative formulas call for.”

Supporters of the education legislation made their presence felt in Annapolis Wednesday with a small rally featuring 20 cardboard cutouts of Maryland public school students.

The groups Progressive Maryland and Working Families sent a billboard truck to downtown Annapolis to rally for more funding for COVID-19 relief efforts. The truck carried videotaped messages of Marylanders who have seen their livelihoods jeopardized by the pandemic.

With restaurants, hotels and stores largely quiet, the truck playing the video messages was one of the few overt signs that the General Assembly is back in session for the first time since lawmakers cut short the 2020 session last March.

“It looks like a ghost town here in Annapolis,” Hogan said.