Racial equity is slated to be a big-ticket item during the 2021 legislative session.

“Here in Maryland and throughout the country, longtime systemic issues in education, health care, financing and so many other areas have persisted and too often have gone either unnoticed or unaddressed,” Ferguson said at a virtual news conference Monday. “In a state like Maryland, that is unacceptable.” 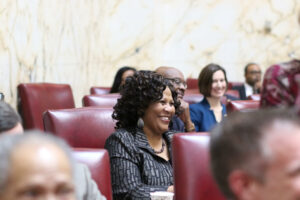 “During our first meeting together, we established a safe and candid space for conversation around equity and inclusion,” Griffith said. “And we want to acknowledge that these conversations were sometimes uncomfortable, but because we had that first meeting it grounded us and prepared us for the substantial and substantive work that we did in the following months.”

Griffith said that many of the recommendations will manifest themselves as bills during the legislative session.

Frosh also released final recommendations Monday for his COVID-19 Access to Justice Taskforce, which he convened in June.

The task force report contains 59 policy and legislative recommendations across six categories, including housing, economic and food security, health equity, labor protections and adequate access to the state’s legal system, and was crafted by community leaders, nonprofit representatives and business, legal and academic stakeholders in conjunction with members of the General Assembly, Maryland’s congressional delegation and the judiciary.

“COVID-19 did not create the systemic failings and inequities of our social safety net and civil justice system.  Rather, the pandemic exacerbated and brought to light these deficiencies and the significant harm they cause,” Frosh said in a statement.  “I am hopeful that we have developed a roadmap to help Maryland recover from this crisis and to put the state in a stronger position to weather future health and economic crises.”

Among the workgroup’s dozens of recommendations were calls to give tenants the right to counsel during eviction proceedings, increase benefits provided under the Temporary Assistance for Needy Families and Supplemental Nutrition Assistance Programs and to make telehealth a mainstay in the state beyond the COVID-19 pandemic.

Jones tweeted out her racial and economic justice priorities over the weekend, which she has dubbed the “#BlackAgenda.”

Jones appears to be slowly leaking bits and pieces of her racial justice priorities, but so far has suggested her focuses surround: