Hogan’s opposition to Donald J. Trump, for example, dates back to the president’s first campaign, while Harris has been a staunch Trump loyalist.

The two also ended up in different camps on COVID-19.

When the governor was taking aggressive steps to combat the spread of COVID-19 last year, the congressman, a physician, was speaking publicly against mask orders and the state’s limits on commercial activity and group gatherings.

But never have the differences between the pair been on bolder display than Thursday, in the aftermath of the storming of the U.S. Capitol. In many ways, it highlighted the broader ideological and tactical divides in the national Republican Party.

Hogan called the event “a heinous and violent assault” — and he said Trump bore blame for undermining the nation’s traditional transfer of power.

“Over the last two months, this sacred tradition has come under attack from our own president, who has chosen to fan the flames of hate and mislead millions of voters through lies and conspiracy theories rather than face the reality of his own defeat,” the governor said. 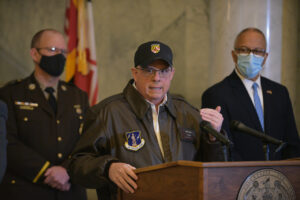 “There’s no question that America would be better off if the president would resign or be removed from office,” he added.

Hogan also pledged that the Maryland National Guard personnel he sent to Washington, D.C., to protect the U.S. Capitol on Wednesday would remain there through the inauguration, set for Jan. 20.

Harris, by contrast, made national headlines for almost getting into a fistfight with a Democratic colleague on the House floor early Thursday morning, as Congress was meeting to certify the presidential election results. According to a media pool report, the lawmaker taunted Democrats during debate, gesturing in a way that suggested a willingness to engage in fisticuffs.

Harris released a statement on Thursday that defended his opposition to the presidential vote count in several swing states. He did not condemn the rioters who terrorized the Capitol, nor did he fault Trump for his role in inciting the violence, as Hogan did.

“Democrats are calling for unity, yet also calling for the expulsion of Members who objected in yesterday’s Electoral College count,” Harris wrote. “Today, some Marylanders are even calling for my resignation, which I will not do.”

“My colleagues and I held legitimate Constitutional concerns about how the November election was conducted in certain states and felt compelled to highlight those concerns during the formal vote count. We did not call for the overthrowing of an election.”

As the nation reeled from the attack on the Capitol on Thursday, analysts noted the remarkable — and still growing — divide between Hogan, Maryland’s popular governor, and Harris, the 1st District’s doctor-turned-congressman.

“Hogan represents this decent, right-of-center pro-business kind of Republican that the party used to have a lot more of,” said Melissa Deckman, a political science professor at Washington College. “He’s not an ideologue. He’s very pragmatic. But he’s also very principled.”

Deckman said she found it “very disturbing” that even after the Capitol was overrun, the majority of House Republicans — including Harris — maintained “this charade of objecting to a vote count that everyone knew was not fraudulent.”

“It just goes to show you how extreme he is,” she said.

Republican strategist and CNN commentator Doug Heye described Harris as “one of those guys who talks about ‘we need to fight,’ but doesn’t have a plan.”

“Andy Harris was on the fringe on everything,” said Heye, a former communications director for the Republican National Committee. “This predates Trump. He was always ‘out there,’ and never productive.”

Yet since winning his seat in 2010, Harris has never had to sweat reelection. Under Maryland’s gerrymandered congressional map, Harris’ 1st District, which takes in all of the Eastern Shore plus portions of Harford, Baltimore and Carroll counties, is a Republican stronghold.

Nevertheless, the Maryland Democratic Party on Thursday called on Harris to resign, and a former state legislator from Montgomery County who now lives in Harris’ district, Democrat Heather Mizeur, said on Twitter that she might take him on in 2022.

“@RepAndyHarrisMD we have found ways in the past to see common ground through our differences,” wrote Mizeur, who has largely stayed on the political sidelines in Maryland since running unsuccessfully for governor in 2014. “However, there is only one way to view your complicity w/ treasonous insurrection against our govt: you must resign immediately — or I will consider retiring you myself in 2022.”

With Republican lawmakers starting to turn on the president, and aides resigning in the wake of the attack on the Capitol, a full-scale GOP civil war is on.

Observers said it is too soon to say whether national Republicans who allied themselves with Trump will find their future political prospects diminished.

For the past several months, Hogan has worked to elevate his national profile and is widely seen as taking steps toward a possible White House run in 2024. But University of Virginia political science professor Larry Sabato told The Baltimore Sun last year that “the GOP would have to change drastically by 2024 for Hogan to have a real shot” at the party’s presidential nomination.

An overnight poll found that nearly half of all Republicans supported the storming of the Capitol.

Still, Deckman expects Hogan to get a fresh look in the wake of the week’s events.

“In many ways he’s very well-situated to become a leader in the Republican Party… depending on how this shakes out, because he has been a very consistent voice,” the professor said. “I think he represents what the GOP used to stand for a lot of ways.”