After order was restored in the U.S. Capitol on Wednesday evening, lawmakers and staff waited, in lockdown, to be able to resume certification of the 2020 election.

Some waited in their offices, others in secure locations throughout the Capitol complex.

Rep. David J. Trone (D-Md.) waited for the all-clear in his office in the Longworth House Office Building.

While there he spoke by phone about the day’s chaotic events with Maryland Matters senior reporter Bruce DePuyt just before 8pm.

This interview has been lightly edited for length and clarity.

Maryland Matters: It’s hard to know where to begin. Did you ever feel that you were in danger? What are you thoughts about everything that just happened?

Rep. David J. Trone (D-Md.): Today opened up as a day of jubilation. To win the two [Georgia] Senate races means we’re going to get so much more done on the things that I care about. Not just addiction and mental health, but also criminal justice reform, which was a tougher lift. Now with the Senate, we’re going to really make some headway there.

I know Rev. [Raphael] Warnock pretty well. He’s a good man and he’ll be a big supporter for us on criminal justice, addiction and mental health. As you may know, his campaign manager, Jerid Kurtz, was my campaign manager. The reverend called me to get a recommendation and we had a long talk and a lunch up here together, and we’ve financially supported the reverend aggressively. To have him and Jon Ossoff both win is such a good thing for America.

And then “boom,” we have a complete reversal.

MM: Where were you?

Trone: I was in the House itself, watching the proceedings. We had finished Alabama and Alaska. They had been certified. We got to Arizona. Republicans objected — [Sen.] Ted Cruz, etc. And then we split — the Senate went back to their chamber — and we were debating the resolution on the Arizona votes.

Then the House police came into the chamber and interrupted everything and said ‘we have a problem — the protestors have breached the first floor. So we’re going to lock the doors in the House and we’ll stay here and be guarding them. So go ahead and continue.’ So we did.

Then about 15 minutes later, they interrupted again and said the protestors have now breached the rotunda, which is literally right down the hall from the chamber. And at that point they said there are gas masks under your seats — two masks under every other seat. And they asked us to take the masks out, open them up, take them out of the packaging, so they were ready to go if needed.

Then the debate continued for maybe five minutes.

Then they said now we’ve got a real problem. They were beating on the doors of the chamber itself. They told us to put the gas masks on. The thinking was if they got in, they would gas the chamber itself and we would have the masks and be protected, and they would not.

So they asked us to put the masks on and begin an immediate exit of the chamber through a side door which was heavily guarded. And everyone went out, through the elevator, tunnels, to a secure location in another building where there are probably another 100 or so members there now waiting for the all-clear.

We’re hopeful we’re going to go back at 8 p.m. tonight and reconvene and finish this.

MM: You had to have been thinking: how is this happening, even as it was really happening.

Trone: Surreal is the right word. It’s just unimaginable, in this phenomenal country we have, that it could come to this. And you have to call it for what it is. What it is is a president who has preached a lack of civility and a lack of compassion for four years, and then after losing an election by seven million votes, and 60 challenges, litigation all over the country.

But the Republicans, because of their own greed and aggrandizement, and building up their own political operations, are continuing to try to take advantage of this.

When I walked out of there, I felt anger and disappointment, because there is so much in America that we need to do. We need to be working together with [Gov.] Larry Hogan and the legislature to get the vaccine out. We’ve got to get our businesses back open. And we’ve got to get our kids back in school.

So we have a lot of important work to do — and that’s what really just make me angry, is that we’re not doing the important work and instead we’re having to react to a narcissist who has been criminal in many things that he’s said and tweeted. And we’ll hope he’s held accountable after this day and after he’s long gone.

MM: Should Trump be impeached? Some of your colleagues believe there must be accountability now.

Trone: My instinct is: I’d love to impeach him, but I’m afraid the time is short and that impeachment might lead to even more violence, and we’ve got to think about our police. We’ve got to think about our citizens. That’s a tough battle. I’m hopeful that after the inauguration is over, we can find things where’s he’s violated the law. I know the Southern District of New York has been looking into that. They’ve been holding off until he’s out of office, and I think that was smart. But I would love to have him prosecuted and [he] cannot be above the law. And he clearly thinks he is, as do his three kids.

MM: We’ve always reflexively put the word “peaceful” ahead of “transfer of power.” It now feels like that’s been broken. How much damage did today do?

Trone: The damage that’s been done to this nation is permanent damage. We’ve created the situation, led by the president, that the laws aren’t there to be upheld and respected, the Constitution is not there to be respected, and if you don’t like the outcome of a vote or a decision, you have some rights. But you don’t. You don’t have the right to do whatever the hell you want.

We can’t be a third world country. Joe Biden called it an insurrection. He nailed it with that. It’s just a sad day for America. It makes America look really, really bad. And it’s a stain that will continue, that we’ll have to wear for decades to come.

MM: This wasn’t an enemy that snuck up on us. There was warning. But everything went south very fast. What would you call for in terms of a security review?

Trone: We clearly need a security review. There have been a lot of warnings that something was going to happen and everyone was preparing, but there were clearly balls dropped. There were not enough folks there to work and support the Capitol Police. The National Guard clearly should have been called in ahead of time. That was a miss. They grossly underestimated the insurgents.

I thought the Capitol Police did a great job of getting us out of the hall. They were very professional, very brave. But at the end of the day they were just totally outnumbered and overrun. You can’t win a conflict if you don’t have enough people on your side, and that’s what happened here today. That’s a miss and people need to be held accountable. That’s not acceptable to have what happened.

They took over the Senate floor. A woman shot and killed right off the House floor. It’s mind-boggling.

MM: Scanning social media, there’s a broad belief out there that white people can get away with literally anything. There’s the potential for accountability for these individuals in the future, but as of now, that’s far from certain.

MM: Do you have any other thoughts?

Trone: I would just add that the Republican leadership — McCarthy, Jordan — has just been so failed. Some of the Senators like Cruz have just failed. All they care about is their own political career, currying Trump’s favor and raising money off of this. It’s just unacceptable. We’ve got to pull together as a country. We’ve got to get stuff done for the American people. This was quite the opposite. 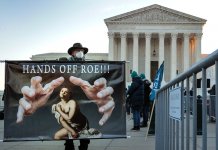