Editor’s note: Between now and Jan. 3, we’re re-running 12 great articles that appeared in Maryland Matters in 2020, in chronological order. On Jan. 4, we’ll provide links to our best-read stories of the year. These are the stories you made possible by supporting our independent nonprofit newsroom.

For many politicians, fundraising isn’t their favorite part of the job. And during the COVID-19 pandemic, it’s become an even more challenging activity.

Instead of crab feasts and galas, many lawmakers this year turned to virtual events or grab-and-go meals with pay-as-you-can price tags.

A first round of fall fundraisers has come and gone, but with the General Assembly session a month away, and with it, a three-month ban on raising money looming, legislators are once again in full-on fundraising mode.

So how are they enticing donors and constituents to spend yet another hour ― or two ― at the computer on nights or weekends?

Sophia Silbergeld, Democratic strategist and a partner at Adeo Advocacy in Baltimore, said while there are some challenges, the shift to virtual events is “80% opportunity.”

Despite some Zoom fatigue, Silbergeld said she hasn’t seen a drop in enthusiasm among donors. “It’s a lot easier for them to just turn on their computer than to get in the car, drive, mill around, eat some meatballs, drink some beer and wait for candidates to speak,” she said.

Among the traditional donor class of lobbyists, interest groups and regular funders, it’s not really necessary to come up with creative ways to encourage attendance at fundraisers, Silbergeld said. But for grass-roots and small-donor campaigns, creativity can make the difference.

And many lawmakers have launched fundraisers inspired by their own experiences during the pandemic.

Over the summer she hosted a virtual “Chat and Chew” during which she baked quiches with supporters.

Quiche, Boyce said, became her go-to meal at the start of the pandemic; she’d whip one up early each week to have a healthy meal option on hand as she balanced rapidly-changing daily schedules.

Last month, Boyce held a second fundraiser: “Biking in Baltimore,” in which she and other elected officials shared their favorite paths through the city, as well as their love for biking, which has brought them ― and an increasing number of others ― a sense of calm during an uncertain time. 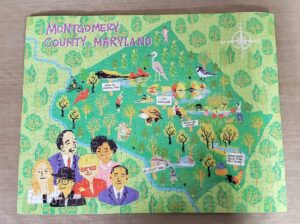 Del. David Moon (D-Montgomery) is giving a pandemic-inspired puzzle to supporters who donate $100 or more. The illustration was made by Moon’s friend and New York Times best-selling graphic novelist Robin Ha. Photo courtesy of David Moon.

Moon said coming up with a creative idea was important because he relies on only small-dollar donations.

The puzzle has also given him a bit of a project to work on, figuring out logistics and manufacturing and packaging. “It’s been one more way for me to while away my time during the pandemic,” he said.

Del. Lesley Lopez (D-Montgomery) wanted to tap into supporters’ desires to learn new skills during the pandemic. In October, she hosted a DIY flower arranging night with Cameron Hardesty, a former florist in the Obama White House.

“You’re trying to think about our very limited format nowadays, because people aren’t comfortable meeting in person, but you still need to come up with something that makes them feel like they’re engaged in a conversation and it’s dynamic in a way that’s not just sitting in front of a screen,” Lopez said. “Because that’s not fun for anyone.”

After the event, Lopez said her cell phone was buzzing with participants sending photos of their finished arrangements.

Later this month, she’ll hold a “Gilmore Girls” trivia night ― because who hasn’t binge watched something during this pandemic? ― including actors and superfans of the show.

Some lawmakers have made efforts at their fundraisers to bring in supporters and residents whose livelihoods have been hard-hit during the pandemic.

Del. Brooke E. Lierman (D-Baltimore City) held three big-name fundraisers in the fall ― each with a carry-out meal or snack from a local business, and local musicians playing live at the start of each event “to make it feel less like a work Zoom and more fun.”

Del. Shaneka T. Henson (D-Anne Arundel) held a first fundraiser fairly early in the pandemic, hiring a bartender who was out of work in May to teach supporters how to mix up a “Shaneka Sangria” over Zoom.

Attendees then settled in for an evening of “Family Feud”-style games, which Henson said proved to be a nice break from the emotional heaviness of the world. “People were really looking to have some fun. It was a time when you really couldn’t go out,” she said. “The energy was just so positive.” 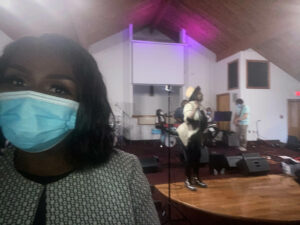 In October, Henson held a live concert with local musicians on Facebook, with supporters encouraged to give any amount. Among the songs in the set? “Purple Rain,” in a nod to her “purple district,” Henson said.

She and the musicians worked to create a playlist that would keep people engaged and sharing the show’s link throughout the concert, Henson said.

Sen. Michael J. Hough (R-Frederick) said fundraising for his fellow Republicans has become harder because they rely on support from small business owners, who have been hit especially hard during the pandemic. Asking for a donation during a pandemic recession is a difficult task, he said.

“You know you have to raise money,” Hough said. “It’s tougher when you know that the economy’s down.”

While the Maryland Republican Party still circulates information about a handful of in-person fundraisers each week, Hough said many Republicans have also shifted their fundraising plans online.

He preferred to throw a big, multi-hundred person barbecue before the pandemic, but this year his main fundraiser was over Zoom, with special guest Lt. Gov. Boyd K. Rutherford (R).

Smaller, in-person outdoor events were more common over the summer ― Hough met with about a dozen high-dollar supporters at a local winery ― but most of his colleagues are now going online, the senator said.

“At the end of the day, we have to do something where people are safe,” he said.

Henson said the pandemic will ultimately have other effects in the world of political campaigns, too. Where grass-roots organizers may have been able to save money through elbow grease or extra hustle before, the foreseeable future of campaigning is online, where ads can be expensive, or through the mail.

Henson said she recently researched the cost of a mailing to the likely supporters in her district and the cost was $10,000 ― and even that figure relied on some deals, she said.

So that means she has to keep fundraising online, and thinking of new ways to keep people engaged.

Boyce said that despite the only-virtual connections, fundraising during the pandemic has still allowed her to connect with people on a personal level in surprising ways.

“This is how we bring people together now,” she said.

And for her, the immediate future means staying true to herself ― and keeping a promise to continue a popular dance party fundraiser, albeit online.

But she won’t be inhibited by the socially distant nature of the gathering, Boyce said.

“I’m a delegate that can dance ― and I’m happy to dance with my family, with my friends, with my supporters and with my constituents,” she said.