Editor’s note: Between now and Jan. 3, we’re re-running 12 great articles that appeared in Maryland Matters in 2020, in chronological order. On Jan. 4, we’ll provide links to our best-read stories of the year. These are the stories you made possible by supporting our independent nonprofit newsroom.  You still have time to make a tax-deductible contribution before year’s end.

In the span of six months, Timothy Reyburn bought a new car, lost his job and his wife was diagnosed with muscular dystrophy.

This was in 1994 ― the same year that he founded Ticoscen, Inc., his small evaporative light scattering detector company in Laurel. As a new business owner, Reyburn needed to figure out health insurance for himself and his wife.

“We got lucky in 1994, getting coverage,” he told Maryland Matters in a phone interview Tuesday.

In 1993, the Maryland General Assembly passed legislation that mandated insurers to develop “community rates” for small businesses employing between two and 50 people. The legislation also prohibited insurance companies from discriminating against people with pre-existing conditions within these employee groups.

Reyburn said he “made an omelet out of it”: he started his company and grouped himself and his wife under his small business, ensuring that she received ongoing care for her chronic condition.

But problems persisted: Throughout the 1990s and early aughts, the Reyburns watched their policies get more restrictive and their premiums skyrocket ― sometimes doubling.

“The only way we could manage that was we kept getting lesser and lesser coverage,” he recalled.

By the time President Obama signed the Affordable Care Act ― colloquially known as “Obamacare” ― into law in 2010, the Reyburns were “on pretty thin coverage,” saving their doctors visits for “catastrophic” circumstances, he said.

Reyburn “went to the mat” to support the law. He and his wife purchased two individual plans, opting for maximum coverage and marveling at its specifics.

“I was like, ‘Oh my gosh, we’re getting way more coverage, no pre-existing conditions restrictions, no lifetime cap … and saving beaucoup bucks,’” he said.

“And the price was right,” Reyburn explained. He said that the cost of their premiums went down “like, $10,000 a year.”

He now goes in for regular preventative care: physicals, flu shots and many, many COVID-19 tests. He travels for work, and because every state has its own policy he has had five tests administered since March.

“If I don’t have insurance, I’m going to be paying that out of my pocket,” Reyburn said.

But now he worries what will happen to his family if the ACA is struck down by the Supreme Court. Justices are scheduled to hear another challenge to the law next month ― and the likelihood that Judge Amy Coney Barrett will be confirmed to replace the late Justice Ruth Bader Ginsburg puts the ACA in particular peril.

“I don’t know what we’re gonna do if we lose it,” he said. “That’s the point, you know. I’m concerned [for] what it would mean to her; to me, as a business person.”

Maryland policy leaders are also wondering what would happen ― and are trying to take steps to protect people’s health care coverage.

The Affordable Care Act has plenty of critics. Republicans in Congress have been trying to kill it almost from the minute it became law, and it has been challenged in the courts for years.

The Supreme Court is scheduled to hear California v. Texas, a suit that could determine whether the Affordable Care Act is constitutional, on Nov. 10 ― one week after the presidential election.

During a virtual news conference this week, U.S. Sen. Chris Van Hollen (D-Md.) called the Republican effort to hustle Barrett through the confirmation process “a grotesque abuse of power” and an “illegitimate effort to pack the court” with a nominee who has written unfavorably about a prior Supreme Court decision to uphold the Affordable Care Act.

“Chief Justice [John] Roberts pushed the Affordable Care Act beyond its plausible meaning to save the statute,” Barrett wrote in a 2017 Constitutional Commentary.

Van Hollen said that the law was nearly struck down by the Senate in 2017, but was saved in the 11th hour “by one vote.”

“It took every single Democratic senator plus three Republican senators to prevent Donald Trump and Sen. [Mitch] McConnell (R-Ky.) from achieving their goal of overturning the Affordable Care Act,” he said. “But what they were not able to accomplish legislatively through the democratic process, they are now trying to accomplish by ramming a Supreme Court justice through even though millions of Americans have already cast their votes in this presidential election.”

What would happen in Maryland?

Following the 2017 attempt to kill the Affordable Care Act, the Maryland General Assembly created the Maryland Health Insurance Coverage Protection Commission, “which is set up, basically, in the event the ACA was thrown out by the Congress at the time, [to address] how would Maryland respond,” said state Sen. Brian J. Feldman (D-Montgomery).

According to Betsy Plunkett, a spokeswoman from the Maryland Health Benefits Exchange, 750,000 Marylanders were uninsured before the Affordable Care Act was enacted.

Feldman, the commission’s Senate chair, said approximately 400,000 state residents have gained access to health insurance since the federal law was enacted in 2010, dropping the number of uninsured Marylanders from 12% to 6%.

Plunkett told Maryland Matters that one in every six Marylanders is enrolled for health insurance through the Maryland Health Benefits Exchange: 1.1 million via Medicaid and 160,000 in private plans.

Feldman said that the Maryland Health Insurance Coverage Protection Commission was established amid the debate to repeal or replace the Affordable Care Act in an effort to stop the number of people covered from backsliding.

Del. Joseline A. Peña-Melnyk (D-Prince George’s), the House chair of the commission, said that the General Assembly has been “proactive” in making sure that residents’ access to insurance is protected, even if the Affordable Care Act is struck down by the Supreme Court.

“We’re getting in front of the problem because we don’t know what the Supreme Court is going to rule,” she said. “ I feel pretty confident that we will be OK.” 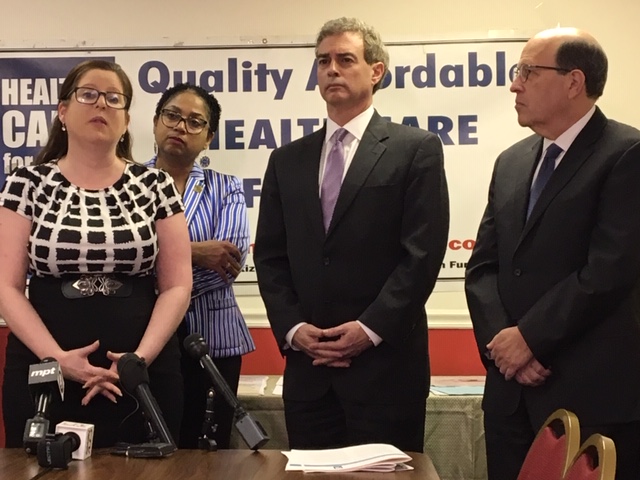 During the truncated 2020 legislative session, Feldman successfully sponsored legislation to codify the consumer protections provisions of the Affordable Care Act into state law. Under the bill, insurance companies must allow children to remain on their parents’ health insurance plans up to age 26, are required to limit cost sharing for preventive care services, and are prohibited from denying coverage to people with pre-existing conditions, among other measures currently protected under the federal act.

Van Hollen said Tuesday that 2.5 million Marylanders are classified as having pre-existing conditions.

In addition to guaranteeing these consumer protections, the commission has gone to lengths to ensure Maryland residents maintain access to affordable health care and medications, including:

― A 2018 bill to establish a reinsurance program in an initiative to give people who aren’t able to buy insurance through their employer the ability to purchase it on their own through the Maryland Health Benefits Exchange, without having to pay astronomical premiums;

― The implementation of the state’s Easy Enrollment Health Insurance Program in 2019, which helps people determine their enrollment eligibility by filling out a section of their tax return;

― The creation of a Prescription Drug Affordability Board to ensure that Maryland residents aren’t victim to over-priced prescription drugs;

― And a 2020 bill that established a commission to study a state-based insurance subsidies program, which, as envisioned, would allow the Maryland Health Benefits Exchange to bolster the individual insurance market via health insurance provider fee assessments and a federal waiver.

“We know that, since Trump has been in office, the Republicans have tried very hard to kill the ACA. And in Maryland, we know that it works,” Peña-Melnyk said. “Is it perfect? No. But does it work? Yes. Are people in Maryland covered for the first time? Absolutely.”

Even with the consumer protections Maryland policymakers added to the ACA, Feldman has concerns about its durability if the Supreme Court rules that it’s unconstitutional.

“What the [Maryland] bill did not address, and this is something we would have to deal with, is the money,” he said.

“We dealt with the consumer protection part of it, but we’re not sure ― and we can’t really be sure ― how we would deal with the budget situation and how we would replace the federal money that accompanies the Affordable Care Act if it’s thrown out.”

Feldman said that it’s one thing to provide people protections if they’re denied health care and another to provide them access to affordable care.

He noted a lot of unknowns: Will states be given relief for insurance programs under another federal stimulus package ― if there is one? What will Maryland’s budget look like at the end of the next fiscal year? If the Supreme Court rules the Affordable Care Act to be unconstitutional, will it be gutted in full or will pieces of it be shaved away? And if the justices opt for the latter, which parts will remain?

“It really would depend, in large part, on how the court rules,” Feldman said.

Maryland remains under a state of emergency due to the COVID-19 pandemic that has infected almost 133,000 residents and killed 3,877.

Peña-Melnyk said that a federal discussion about striking health care for millions when it’s most needed is “negligent” and “inhumane.”

Feldman says the pandemic has revealed a lot of America’s fault lines.

Editor’s note: This article has been updated to correct the date of the Supreme Court arguments and to more accurately characterize a bill passed by the General Assembly earlier this year.