Shortly before the curtain rose on the annual Legislative Follies in Annapolis in 1987, Mike Miller approached me in the back of the auditorium to ask if I was going to broadcast the show live. When I said no, he then approached other TV reporters and photographers asking the same question. That’s when I knew we were about to witness a spectacle far more racy than ever before.

For years, state legislators hosted the Legislative Follies to raise money for scholarships. But this was also a chance for Democrats and Republicans to briefly cast aside their political squabbles and let off steam. There were skits to parody real issues debated by the General Assembly. But this was all in fun, as legislators let their hair down to poke fun at their colleagues and themselves.

Miller proceeded to unleash an R-rated roasting of the new governor, who was seated in the front row with his longtime companion, Hilda Mae Snoops. In a long and sometimes vulgar rant, Miller poked fun at Schaefer’s personal appearance as well as his loyal staffers.

For the first few months of his administration, Schaefer had declined to move into Government House, preferring to stay in the Southwest Baltimore row house where he grew up. So Miller cited a line from the song “With a Little Bit of Luck” from the musical “My Fair Lady.”

“On the street where you live?” yelled Miller. “Who in the hell knows where you live, Governor!” The crowd roared, but Schaefer was not amused. 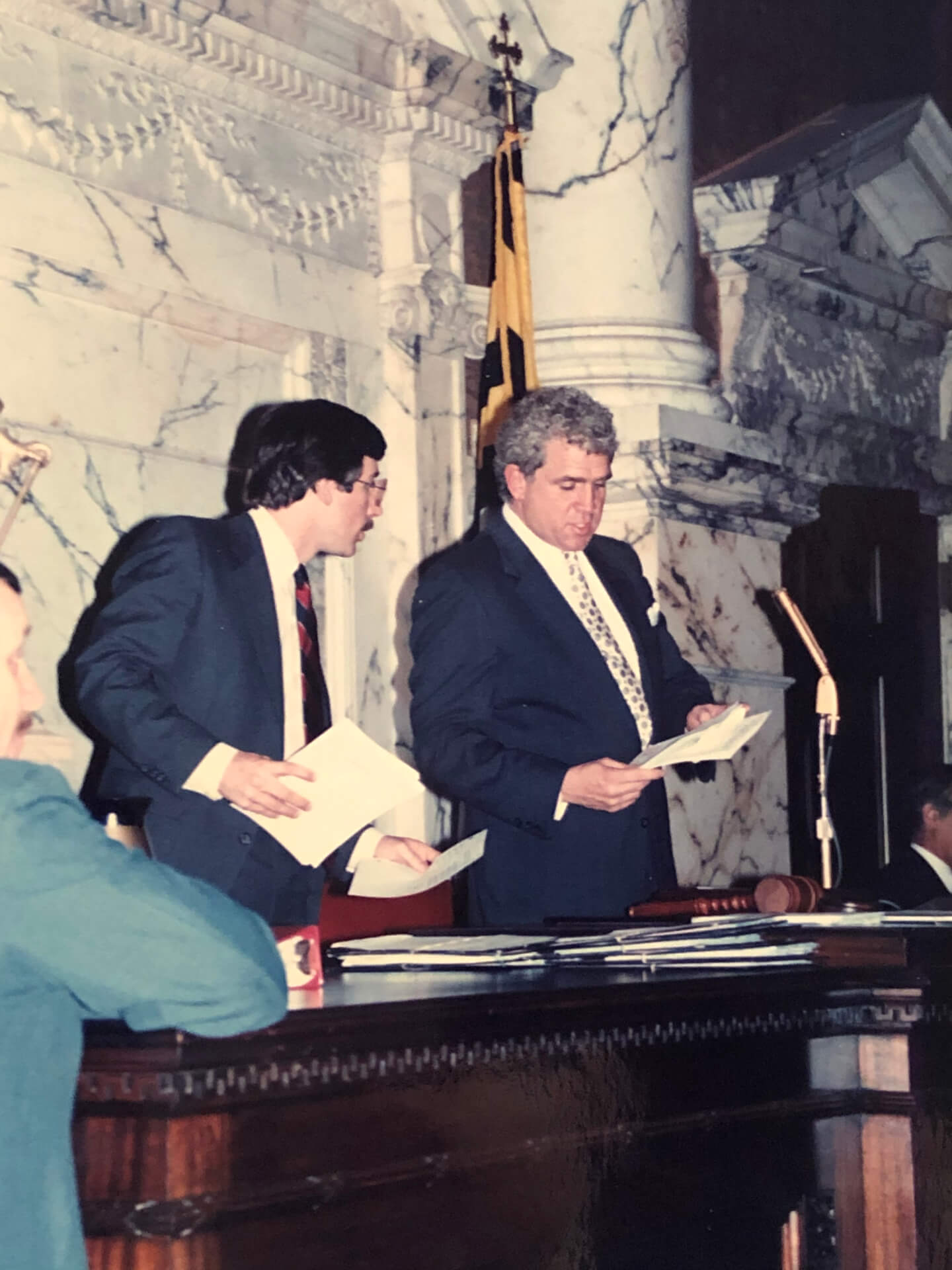 Former Baltimore City Sen. Julian L. Lapides (D), who attended the show that night, called Miller’s performance “a disaster.” But Lapides, now 89, says, “Even though it was really in terrible taste, I don’t think he [Miller] meant it to be personally hurtful.” He viewed Miller’s performance as a message to Schaefer that “he wasn’t going to be pressured by the governor, that the legislature was an independent body.”

As the longtime mayor of Baltimore, Schaefer enjoyed considerable influence over the city council. But as governor, Schaefer would encounter far greater challenges in reaching a consensus on issues with 188 legislators.

Perhaps the most controversial legislation facing lawmakers in 1987 was a bill calling for public funding for construction of two sports stadiums in downtown Baltimore. Orioles’ fans feared that without a new stadium, the team might be moved to Washington, D.C., by prominent D.C. attorney and team owner Edward Bennett Williams.

But Lapides recalls that after a brief filibuster, it was Miller who brokered a deal with opponents to get the stadium bill enacted. Instead of using taxpayer dollars, the two stadiums would be funded by state lottery revenue.

For Schaefer, it was considered a major victory in his first legislative session. One year later, Williams signed a long-term lease to keep the Orioles in Baltimore. Eight years later, Cleveland Browns owner Art Model utilized the stadium deal to move his NFL team to Baltimore to become the Ravens.

Del. Samuel I. Rosenberg, 70, a Baltimore City Democrat and longest serving member of the House of Delegates, says, “I don’t recall a significant issue on Schaefer’s agenda that failed, and that would not have been the case without Miller’s green-lighting those controversial, contentious bills.”

Schaefer never attended another Legislative Follies, and the annual show was abolished years ago amid growing complaints that the skits performed by public officials were highly inappropriate.

But Lapides views Miller as “an excellent president of the Senate who was very forthright in his opinions, personable, had a good sense of humor and really was an outstanding leader.”

John Rydell has covered state politics for more than 30 years with WBFF-TV and Maryland Public Television. He can be reached at [email protected]

All posts by John Rydell