Citing the increasing toll that metastatic prostate cancer has had on his body, Senate President Emeritus Thomas V. Mike Miller Jr. (D-Calvert) announced on Wednesday that he is retiring from the legislature, effective immediately.

In a letter to his successor, Senate President Bill Ferguson (D-Baltimore City), Miller said “my heart and my mind remain strong, but my body has grown too weak to meet the demands of another legislative session.”

Miller recently told a reporter that he has gone “from a cane to a walker to a wheelchair.”

Speaking to reporters on a midday Zoom call, Miller said, “I thought I could continue on. … But the cancer is in all my bones.”

“My body is wracked with pain,” he added. “Physically I’m not able to do the job.”

The legislature is due to begin its 2021 session in three weeks.

A student of history who made history, and a voracious reader (the walls of his study are lined with the hundreds of books he has devoured over time), Miller said he steps down “with tremendous sadness.” 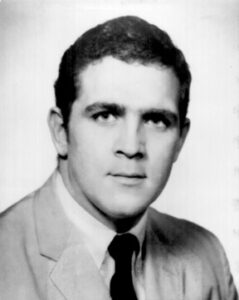 The 78-year-old lawyer and lawmaker said he has seen many changes in Annapolis during his years in the State House. There is, he said, a “different breed of elected officials” that bring “new ideas.”

“Now, instead of people staying late at night in the bars or whatever, they’re drinking their water because they have to jog the next morning. It’s a younger group, with some very progressive ideas. It’s a good time for me to step down, quite frankly.”

Miller’s resignation brings to a close a 50-year tenure representing Southern Maryland and Prince George’s County in the state legislature — a single term in the House of Delegates, then 12 terms in the state Senate — highlighted by the 33 years he served as Senate President.

He remained a member of the chamber in 2020, representing the 27th legislative district and serving on several influential panels, including the Budget and Taxation Committee and the Legislative Policy Committee. 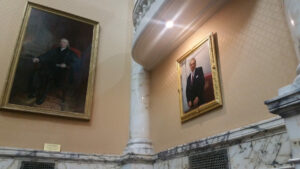 A portrait of former Senate President Thomas V. Mike Miller Jr. now hangs in the neighborhood of Samuel Chase, a signer of Declaration of Independence. Photo by Josh Kurtz

Although he relinquished the gavel in 2019, Miller retained the president’s spacious corner office in the Miller Senate Office Building, and he continued to have executive protection. A large portrait of him was hung on the walls of the historic Senate Chamber during last year’s session, just a few feet from his desk in the fourth row.

He told Maryland Matters in an interview earlier this month that he and his staff were staying abreast of constituent matters, and he pledged to participate in the 2021 session as his health allowed.

During a freewheeling discussion, Miller offered analysis of state and national politics, in his usual insightful, blunt and colorful fashion.

Those who have observed and worked with Miller routinely say his mark on Maryland will never be matched.

“I have known Mike since I was a kid,” said Gov. Lawrence J. Hogan Jr. (R), “and it has been one of my greatest privileges as governor to serve alongside him.”

“He will go down in our state’s history as a lion of the Senate.”

Said former Gov. Martin J. O’Malley (D) in an interview: “Mike Miller has been there at the center of all of the great debates and all of the big challenges. He can rightly claim to have been a part of every positive thing that the people of our state accomplished for themselves and their grandkids over the last 40 years.”

Although he and Miller had an uneven relationship, marked by periods of both conflict and cooperation, former Gov. Parris N. Glendening (D) also praised his fellow Prince Georgian.

“It’s a sad day,” said Glendening. “Whether you loved the guy or hated the guy, this is a sad day. He just contributed so much. At least he’s doing it his own way, which is good.”

Many of Miller’s colleagues in the Senate have moved up the political ladder, in part due to the lessons they learned in the chamber and the campaign support he facilitated.

“Governors have come and gone, but Senator Miller, with unmatched political acumen, has steered Maryland on a progressive course and toward a more perfect union,” the lawmaker said in a statement. “…He is a dear friend and his mentorship and wisdom remain invaluable to me.”

“I felt he was very fair to the Republican Caucus,” Hershey said in an email to Maryland Matters. “He deeply respected bi-partisan process and appreciated the perspective we brought to the entire body of the Senate.”

Hershey said he would talk with Miller frequently about issues important to his district.

“I’d go to him on several issues, mostly those that affected the watermen or farmers and asked for his help. Most times he was non-committal but he would always say, ‘just do the best you can.’ And you know what, sometimes things worked out the way I wanted, and I knew it was because he found a way to help me out.”

“I believe very strongly in education,” he said. “Everybody should have an equal opportunity for education. And we can make that happen if we find a way to pass the Kirwan proposal and fund it.”

In his letter to Ferguson, Miller expressed regret that national political leaders appear to have lost the ability to compromise or disagree without rancor.

Miller’s resignation came 237 years to the day that George Washington resigned his commission as commander-in-chief of the Continental Army in the Maryland State House. Coincidentally or not, Miller quoted Washington’s address to the Continental Congress, which was meeting in Annapolis:

“Having now finished the work assigned to me, I retire from the great theatre of Action, and bidding an affectionate farewell to this August body, under whose orders I have so long acted, I here offer my Commission, and take my leave of all the employments of public life.”

Miller closed his letter with a prayer for the state:

“I must now retire from august body of the Senate of Maryland and take my leave of public life. I bid an affectionate farewell to you all and it is my greatest hope that our Almighty God bless and protect you, your families, our Nation, and our State. I pray that future generations in the Maryland General Assembly will continue to come together in the spirit of public service and unity to once again get to work on behalf of the citizens of the great State of Maryland.”