After a year of hearings and legal wrangling with Washington Gas, the Maryland Public Service Commission has finally levied $750,000 in civil penalties against the utility for its role in a gas-fueled apartment complex explosion in Silver Spring on Aug. 10, 2016. The accident left seven people dead, 68 injured and many residents without homes.

A lengthy investigation by the National Transportation Safety Board concluded it was the failure of an unvented mercury service regulator (MSR), owned by Washington Gas, that caused the explosion at the Flower Branch Apartment complex in the Long Branch neighborhood.

Washington Gas fought back against the findings of the NTSB probe and has continued to do so as the PSC began its own investigation in the fall of 2019 to determine whether the company’s failure to live up to a commitment made in 2003 to replace all MSRs in the Maryland service area by 2013 and file annual reports detailing the progress of the MSR replacement program violated a state statute.

Fines for such violations ranged from $100 a day for neglecting the filing of annual reports to $25,000 a day for failure to ensure the company’s operations were in the interest of the public by not replacing the regulators as promised. It’s been 17 years and maximum penalties for both infractions could have resulted in millions of dollars in fines for Washington Gas. But that’s not what happened.

Instead the PSC decided to fine the utility $750,000 for its failure to file annual reports each year for 16 of the past 17 years since it made the commitment to do so.

The commission’s decision, detailed in an order issued on Dec. 18, was in direct contradiction to a recommendation by PSC’s own staff that found that the company was seven years late in its commitment to replace all mercury service regulators and so could be fined $63.875 million. While PSC staffers considered that excessive, they did recommend a fine of $1.25 million for failure to replace the MSRs, along with an additional $620,500 for not filing annual reports — for a total of $1,870,500.

The utility said it has a contract with a company that is surveying all the MSRs still in use in Maryland. Washington Gas pledged to replace all the units at multi-family housing complexes within three years after the survey is completed and within five years at single-family homes.

“The Company supplied evidence [to the PSC] that MSRs are just as safe as spring-loaded regulators and are being removed primarily for environmental reasons,” the Washington Gas statement concluded.

As part of its probe, the PSC held an evidentiary hearing on Sept. 24 and 25 this year. Interested parties were permitted to call outside experts to testify and cross-examine all witnesses. Washington Gas participated, as did the staff of the PSC, the Office of the People’s Counsel, representing Maryland consumers in utility matters, and the Apartment and Office Building Association of Metropolitan Washington.

In addition to whether Washington Gas violated the state statute, the PSC also examined whether the $1.962 million collected by the utility from ratepayers to replace the MSRs was properly spent; why information detailing the number of MSRs remaining in the system was conflicting and how the company intended to move forward to replace all the MSRs in the future.

As part of the record, Washington Gas conceded the company failed to file annual reports and suggested a fine of $100 a day for four years equaling $146,000. The fine was based on the number of days between the hearings where utility officials committed to filing the reports and the date of the next rate-based hearing when they would have been expected to report on previous actions.

In the hearings, expert witnesses for Washington Gas claimed the company’s failure to complete the replacement program was justified because its resources were needed elsewhere. In the fall of 2003, the company was faced with a number of gas leaks in Prince George’s County, incidents that desperately needed attention. So company officials and hired experts claimed it was actually responsible on the part of the utility to direct resources to the greatest safety risks.

And while the gas leaks consumed the company’s resources for a time, according to information provided by Office of People’s Counsel, the emergency period subsided somewhere between 2006 and 2008.

Still, the fact that the company diverted resources to address safety risks resonated with the PSC. When asked why the commission chose not to adopt the recommendation by staff to fine Washington Gas $1.25 million, the commission responded, “Unexpected safety risks associated with the leaks in Prince George’s County in 2003 would have justified a temporary halt or reduction in the MSR replacement; the Commission finds that the company acted reasonably to redirect resources to that situation, but WGL should have notified the Commission, hence the reporting violation subject to a civil penalty.”

The company itself conceded the commission should have been notified of the transfer of funds and personnel.

In spite of the safety risks that Washington Gas felt necessitated diverting funds, both the Apartment and Office Building Association and the Office of People’s Counsel advocated for the PSC to fine Washington Gas for not completing the MSR survey.

“I find the issue of the company not meeting commitments it made to the commission and its customers to be at the heart of this case,” Brendan Larkin-Connolly, an expert witness for OPC, said during the PSC hearings. The consumer rights agency argued that failing to hold Washington Gas accountable and without consequences could significantly undermine the regulatory process.

It is an opinion shared by PSC Commissioner Michael Richard, who wrote in a concurring statement, “I am persuaded by the testimonies of Staff and the OPC that the gravity of WGL’s failure to fulfill its commitment to complete the MSRRP, not simply to file the annual reports that were required, is the most serious of the Company’s infractions in this case.” 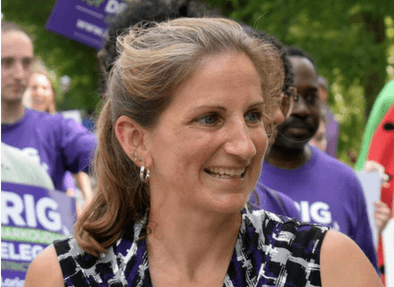 It is also an opinion shared by state Del. Lorig Charkoudian, (D-Montgomery), who represents the Long Branch neighborhood.

“I am shocked and gravely disappointed at the inconsequential fine levied by the Public Service Commission on WGL,” she said. “It is crucial that the Public Service Commission use all of the tools at its disposal to hold utilities accountable for public safety, so that other utilities understand the implications should they choose to flagrantly abandon commitments to the PSC, as WGL did in this case.”

Vicki Warren is a freelance reporter and documentary producer in Silver Spring. She can be reached at [email protected]

All posts by Vicki Warren

Denise Reid has an unfortunate level of knowledge about gun violence, with 11 family members shot or killed. That includes her son, Tevon Terrell,…