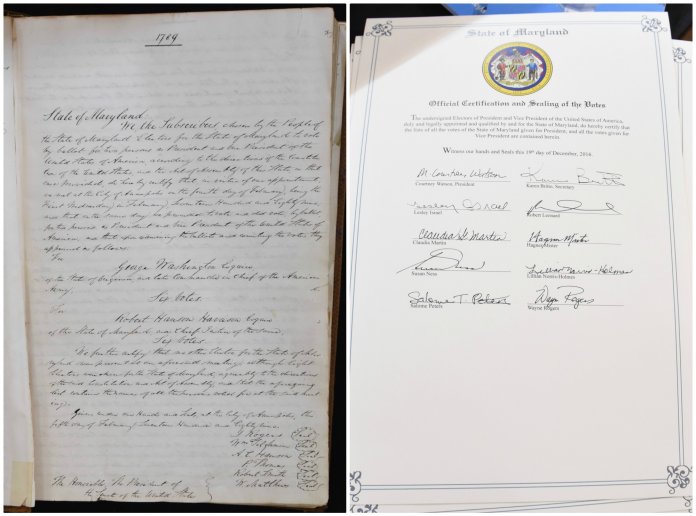 Ten Marylanders will convene at a socially distanced meeting in the State House on Monday at noon, casting 10 Electoral College votes for President-elect Joe Biden and Vice President-elect Kamala Harris.

It will be the 59th time the Electoral College has convened in the state capitol since 1789.

A candidate needs 270 of the 538 Electoral College votes to win the presidential election. Based on the results of the Nov. 3 election, Biden and Harris will receive 306 votes, including all 10 of the votes from Maryland.

So who are Maryland’s electors?

Each political party submitted 10 names to the State Board of Elections before in October.

Because Maryland is a winner-take-all state, the candidate who carries the state in the general election receives all of the state’s 10 electoral votes.

The electors chosen by the Maryland Democratic Party are:

Matthews chaired the Maryland Democratic Party from 2017 to 2019, and was a candidate in the 2016 primary election for the state’s 8th congressional district. Prior to leading the state party, Matthews was a journalist and Marriott executive.

Perini is the former chair of the Washington County Democratic Central Committee and a former Hagerstown City Councilman. Perini was also a candidate for Maryland House District 2B in 2018.

Rodriguez-Lima leads the Mayor’s Office of Immigrant Affairs in Baltimore City, and was previously named “Professional of the Year” by The Maryland Hispanic Chamber of Commerce. She also spearheaded a legal fund to protect immigrant families from deportation.

Roberson is a Prince George’s County resident and member of the county’s Democratic Central Committee. He’s also the vice chair of the Parent Teacher Student Association in the county, according to his website. He ran unsuccessfully for a House of Delegates seat in 2018.

Hunt is the vice chair of the Garrett County Democratic Party.

Daley is the National Director of Women in NAACP, and was the first-ever first African American president of The American Counseling Association. She was also the first woman to lead the National Advisory Council on Career Education.

Courpas is the treasurer of the Carroll County Democratic Central Committee. She’s also the president of The Arc of Carroll County, a non-profit that advocates for people with intellectual and developmental disabilities.

At Monday’s meeting, Gov. Lawrence J. Hogan Jr. (R) will deliver opening remarks and electors will be sworn in by the Clerk of the Court of Appeals, Suzanne C. Johnson.

The proceedings can be viewed online here.

The electors will sign seven original Certificates of Vote. Those documents will be sent to the vice president and the U.S. National Archives and Record Administration.

On Jan. 6, Congress will meet in a joint session to unseal the electoral votes, which are then counted and the vice president ― as president of the senate ― declares the winners.

The presidential inauguration is Jan. 20.

In 2007, Maryland joined a compact that could eventually guarantee that the national popular vote winner would take the presidency, by agreeing to cast electoral ballots for the candidate who gets the most votes nationally. But that won’t take effect until it’s enacted by enough states to hold a majority of electoral votes, or 270 votes of 538. Fifteen states and the District of Columbia have already signed on, amounting to a total of 196 electoral votes.

For a trip back in time, the Maryland State Archives has compiled a list of the state’s presidential electors since 1789 here.

Four Vying to Replace Kopp as Treasurer, Though Davis Remains the Overwhelming Favorite

How Paid Leave, Tax Cut For Rich And More Could Get Axed From Biden’s Social Policy Bill