Matthew Sherring, a former top official at the Maryland Environmental Service, refused to answer more than 170 questions during an appearance before a legislative committee on Thursday.

His refusal to tell the committee about the service’s financial and employment practices — particularly its decision to give a lucrative severance to a former chief of staff to Gov. Lawrence J. Hogan Jr. (R) — infuriated members of the Joint Committee on Fair Practices and State Personnel Oversight.

They accused him of stonewalling the committee’s investigation and they vowed to press ahead for answers.

Although the Maryland Environmental Service is not a state agency, it is a “not-for-profit business unit” whose board is appointed by the governor and confirmed by the state Senate. An estimated 95% of MES revenue comes from the county and municipal governments that contract with the service to handle public works and environmental projects.

The main focus of the legislature’s probe is Roy McGrath, who served as the CEO of the service until he joined the Hogan administration in May. He is scheduled to testify before the Joint Committee on Fair Practices and State Personnel Oversight next Wednesday. 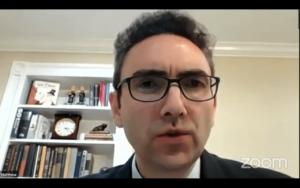 Flanked by an attorney who sat off-camera during the three-hour hearing, Sherring refused to answer even the most basic questions about his tenure at MES.

“Because there are on-going multi-agency investigations into this matter, it is with regret that I am unable to answer your and the committee’s questions at this time,” he said. “On the advice of my attorney, I am invoking my rights under the Maryland Declaration of Rights and the United States Constitution and respectfully decline at this time to answer the question, because a truthful answer might tend to incriminate me.”

Maryland Matters reported in October that state and federal investigators are looking at MES’s decision to award McGrath a year’s severance when he left the service to join the governor’s team. Board members told the committee this summer they were reluctant to do so, but were leery of making enemies of Hogan or his new top aide.

Though Sherring was tight-lipped during his two-and-a-half hours of testimony, the grilling he received from the committee’s outside counsel, Ward B. Coe, was nonetheless revealing, as it shed light on what appeared to be a long period of pricey out-of-town travel by top MES officials.

It also revealed a loosey-goosey practice of expense reimbursement that lawmakers said was an insult to taxpayers.

At one point, Coe displayed a multi-colored chart that compared the amount of travel and expense reimbursement McGrath and Sherring sought with their predecessors.

In their three-plus years at MES, McGrath and Sherring were reimbursed for $129,702 and $91,610, respectively, for conferences, travel, meals and other expenses, the committee’s chart showed.

Their immediate predecessors, James Harkins and John O’Neill, were reimbursed $15,923 and $17,963, respectively. Those men each served for 11 years, considerably longer than McGrath and Sherring.

“It has become clear that Mr. McGrath used Maryland Environmental Service as a slush fund to pay for many expenses,” for which Sherring provided no answer or justification, said Sen. Clarence K. Lam (D-Howard), co-chairman of the panel.

In an op-ed in The Baltimore Sun after news of his controversial severance broke, McGrath defended the expenditures, saying he was trying to raise MES’s profile and attract new business.

But Lam said Sherring’s refusal to talk about the trips raised “grave concerns.”

“It leaves us to assume that there was something untoward or inappropriate about these expenses,” Lam added.

According to one set of receipts, Sherring shelled out $14,475 for McGrath to attend executive training at the Harvard Kennedy School in June, during the height of the COVID-19 pandemic. McGrath then signed off on the reimbursement, Coe said.

“We are, as a state, in very troubling and challenging financial times,” Lam said. “I hear from constituents who are losing their homes because they are not even receiving these small unemployment benefit from the state. … I think this is deeply troubling.”

Sherring refused to explain staff e-mails that appeared to show efforts he and McGrath undertook to edit minutes of an MES board meeting they did not attend.

He refused to describe any new business that was generated by his frequent travel.

He declined to explain text messages he and McGrath exchanged regarding a strategy to “go on the offensive” after The Baltimore Sun reported on the severance McGrath received.

Sherring offered no justification for why reimbursements for his dinners, which frequently exceeded $100, were approved, even though they were often filed weeks late and exceeded MES meal limits.

Nor did he explain why he was reimbursed for the rental car he used to drive to Palm Springs, Calif., a trip he took while attending a conference in Indian Wells, 20 miles away.

Among the scores of other questions Sherring refused to answer:

“You spent the night at the College Park Marriott. … And on the D.C. Metro, how long does it take to get from College Park back to your home in D.C.?”

“The position of Strategic Partnerships Executive was a new position created for you, correct?”

“Who did you report to?”

“Was there a period of time when Mr. McGrath was angry with you?”

“[You sought] reimbursement for $4,734.70… for attending a P3 [public-private partnership] conference in Dallas-Ft. Worth. What is the P3 Conference?”

“Mr. McGrath approved you spending $14,475 for him to attend Harvard, correct?”

“The Harvard course, in fact, took place in June, after McGrath had left MES, correct?”

“Did Mr. McGrath ever say to you, in August of 2020, that the governor approved his severance package?”