Across the street from the Baltimore War Memorial and in front of a small group of reporters, Baltimore’s new mayor, Brandon M. Scott (D), swore in former Del. Nick J. Mosby (D) as Baltimore City Council president and the newly elected and incumbent members of the city council on Thursday.

“I have the honor and distinction of swearing in a young man that I got sworn in together with for the first time on December 8, 2011,” Scott (D) said of his friend Mosby. “He wants Baltimore to be better because like me, he knows how it feels to live in a city that doesn’t believe in young Black boys, and we’re going to work together to change that for everybody in Baltimore to know that they can be whatever they want to be.” 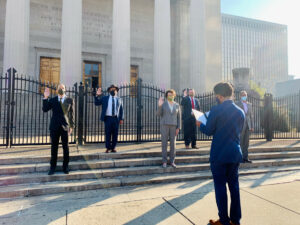 As around 20 onlookers and security personnel filled in a patch of green where the socially-distanced inaugural ceremony took place, Mosby delivered a 15-minute speech that underscored how a history of unfair, racist policies still afflict Baltimoreans to this day, and promised to implement good public policy based on data and research under his leadership.

The murders, poverty and broken mass transit system that exist in the city are “direct results of policy shaped by bigotry and systemic platforms of white supremacy,” Mosby said.

Mosby highlighted that 110 years ago, the Baltimore City Council passed the nation’s first racial zoning law, which impeded Black families from moving into white neighborhoods. The 1937 realigning map, which was color coded for mortgage lenders, is another example of racist policies that blighted families like his own, Mosby said.

He called his neighbor, “Ms. Williams,” someone who embodied the experience of regular Baltimoreans. Ms. Williams lived comfortably in a large three story row home, which slowly decayed as violence and unemployment pervaded the city and especially impaired Black neighborhoods, Mosby said.

“Unfortunately this is Baltimore’s story,” Mosby said. But he expressed optimism that negative perceptions of the city are not incurable. “Problems have solutions, and you elected us to be your problem solvers,” he said.

Like Scott, Mosby reminded the public that he grew up in the city and connected with Baltimore residents about city-specific traditions.

“You know me, we grew up together. You stood in line with me and my mother at Mondawmin waiting for Santa Luke,” Mosby said. “You cheered me on and also booed me at the Poly City football game. We spent summers together at Gilman Upward Bound. You sat next to me at my daughter’s recital.” 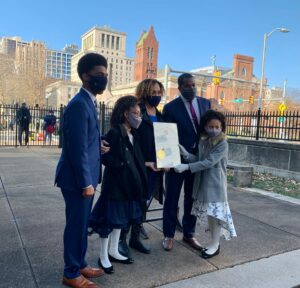 Council President Nick Mosby (D) poses for a photo with his family and Mayor Brandon M. Scott (D) after the swearing-in ceremony. Photo by Elizabeth Shwe.

Since 2017, Mosby represented District 40 in the House of Delegates and had served on the city council representing District 7 from 2011 through 2016. He ran unsuccessfully for mayor in 2016.

Mosby now returns to the city council with some experience in Annapolis that he hopes to apply in Baltimore City’s legislation, particular in strengthening fiscal accountability.

“Baltimore City citizens deserve a legislative body that has fiscal analysis with the laws that are being proposed as well as passing,” Mosby said. “We’re the only major city in America that does not have fiscal accountability in legislation.”

As an electrical engineer by training, Mosby stressed his trust in data evidence-based solutions and fiscal analysis, rather than solutions based on “emotion” to drive sensible legislation.

Mosby did not address some of the embarrassing headlines of the past few months, which have exposed some questionable business dealings involving him and his wife, Baltimore City State’s Attorney Marilyn J. Mosby (D).

This year’s staggered inaugural ceremony took place outside as a precaution against COVID-19, requiring multiple shuffles back and forth from in front of the War Memorial to behind the building where new and incumbent city council members signed the city register book and took pictures with family members.

Unlike Scott’s inaugural ceremony two days earlier, which took place inside City Hall and virtually, a larger group of press was allowed to witness council members take their oaths and sign the city register. 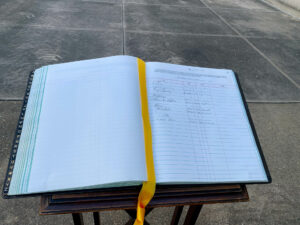 Following tradition, city council members signed a City Register at the start of their terms. Photo by Elizabeth Shwe.

“We stand with Mayor Scott today and stand prepared to return to Annapolis next month to bring resources back to Baltimore that invest in education, improve transportation, and increase public safety,” he said. “While we are faced with a moment of global crisis with Covid-19, our City’s best days lie ahead of us.”

In addition to the dual public health crises of the COVID-19 pandemic and epidemic of violence, as Scott often describes it, Mosby stressed how important it was to also recognize the city’s population decline, especially with the upcoming census.

“We have to grow our city. We have to we have to strengthen our communities, and we have to provide our residents with real opportunities. So one of the main missions that I will have in this first term is developing ways of how we grow our population: how do we lure folks back into the city of Baltimore the city that we love,” he said.