As the expiration date for stays on certain evictions approaches, advocates say officials need to ramp up efforts to help tenants in order to avert an unprecedented surge in homelessness.

Up to 204,000 Maryland households are at risk of eviction, according to estimates from the Chicago-based consulting firm Stout. While tenants are protected by state and federal stays on certain evictions, some are still losing their homes.

A Centers for Disease Control and Prevention moratorium on certain evictions, along with Maryland courts’ stay on failure-to-pay rent cases, is set to expire at the end of the year. The CDC moratorium gives explicit protections to people who would be made homeless or forced into a congregate living situation because of an eviction.

There’s a direct tie between evictions and homelessness, said Carissa Hatfield, an attorney with the Homeless Persons Representation Project in Baltimore. She cited a 2019 Baltimore City assessment on homelessness, in which more than 20% of people surveyed cited eviction as a cause for their own homelessness.

Hatfield doesn’t think Maryland officials are ready for the surge in homelessness the pandemic could bring.

“Based on what we have seen during this pandemic … I don’t believe they are prepared to handle what is very likely to happen starting in January after the expiration of the CDC eviction moratorium,” Hatfield said.

She noted that eviction has a disproportionate impact on people of color. According to the Public Justice Center, an analysis of eviction data in Baltimore City showed that the eviction count for Black households was three times higher than for white households.

Marylanders will still have some protections under an order by Gov. Lawrence J. Hogan Jr. (R), which put a halt to certain evictions for those who took a financial hit due to the coronavirus pandemic. That order will be active as long as Maryland’s state of emergency continues.

Advocates, however, have warned that the state and federal orders have loopholes – and have repeatedly called on officials to provide more money for rental relief.

Hatfield said short-term rental relief is important, and compared it to “putting a Band-Aid on the wound.” She said lawmakers should also consider ways to help tenants that could extend eviction protection beyond the pandemic – like guaranteeing tenants the right to counsel in eviction cases.

Sen. Mary L. Washington (D-Baltimore City), the co-chair of the legislature’s Joint Committee On Ending Homelessness, told Maryland Matters that funding emergency COVID-19 relief will be one of her top priorities in the next session, but said she thinks the state needs deeper reform to prevent homelessness.

Washington said the pandemic has exacerbated housing insecurity that already existed in Maryland, and has turned “cracks into fissures” when it comes to the state’s relief efforts. She noted that many Marylanders have waited weeks or even months for unemployment benefits.

“We really right now are lacking proper infrastructure to provide for people,” Washington said. “We continue to underfund and improperly support families.”

State officials have said their hands are tied in terms of rental relief until the federal government provides more money. The state allocated $30 million in federal relief funding toward eviction prevention and rental relief earlier this year, but advocates have warned that it’ll take much more than that to curb evictions.

Help for those already homeless

Some advocates say it’ll take more than public officials to help those who are already struggling with homelessness in Maryland. 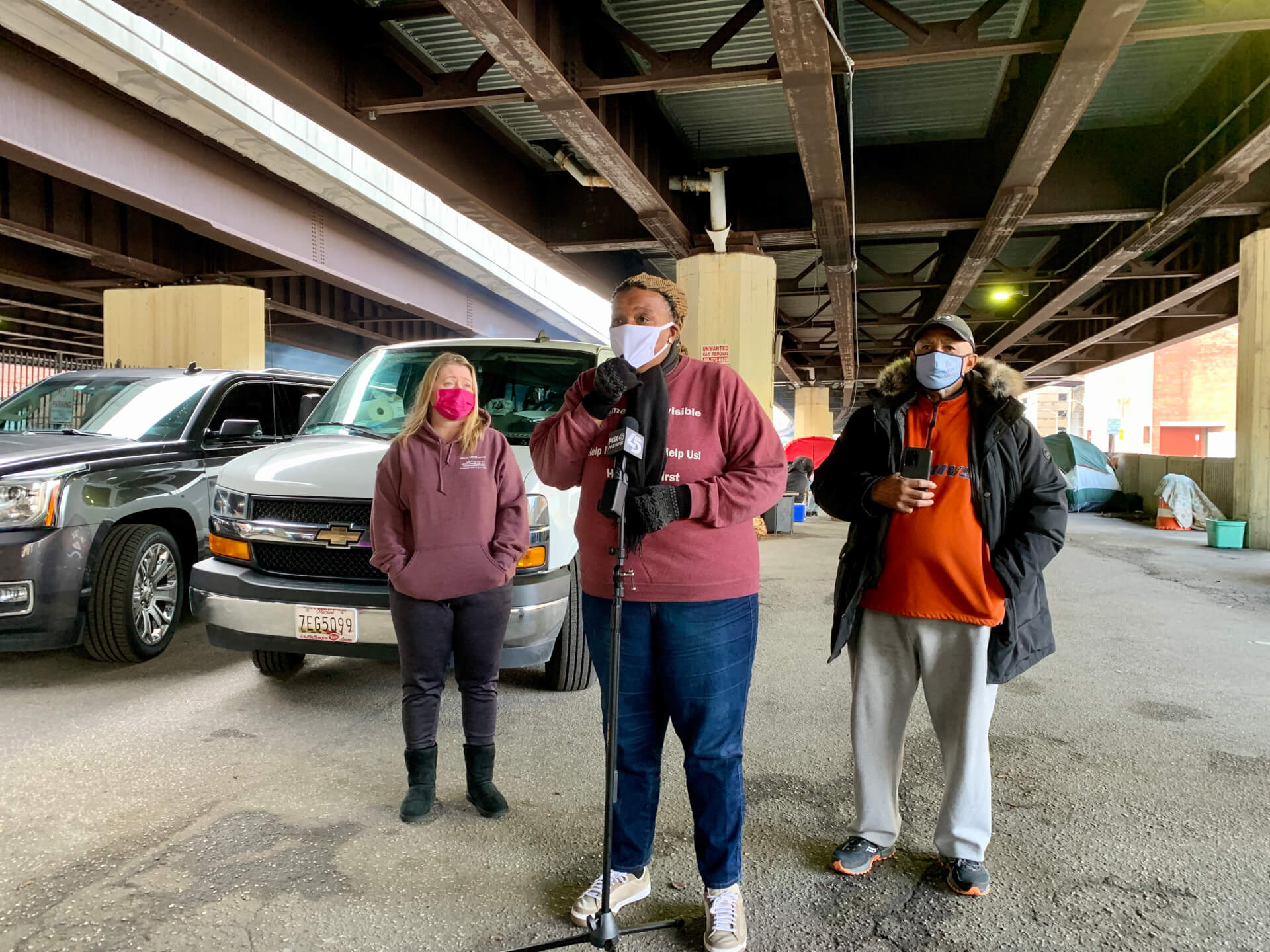 Minister Christina Flowers under I-83 in Baltimore discusses homelessness in the city. Photo by Elizabeth Shwe.

After an attempt by Baltimore City officials to clear out an encampment with roughly 30 tents under Interstate 83, Christina Flowers, a minister and homeless advocate who had been living with the people in the encampment, called on the city’s business leaders to step up and help the city’s vulnerable residents.

Flowers, the founder of homeless advocacy group Real Care Providers, was particularly concerned about how people living outside will weather the winter.

City officials have since said they weren’t trying to evict people living in the encampment, but were trying to move individuals into hotel rooms to curb the spread of COVID-19, according to The Baltimore Sun. The CDC has warned against clearing out homeless encampments during the pandemic.

Washington said the legislature needs to make sure individuals living in encampments are safe and have access to state services, rather than attempting to clear out the encampments. She doesn’t want to force people into congregate living situations, where self-isolation is difficult.

Washington also wants to expand housing options for people without homes. She said part of her committee’s recommendations on combating housing insecurity include converting vacant housing around the state into housing for people experiencing homelessness.

The coronavirus pandemic hasn’t just highlighted the need for better homelessness services in the state, Washington said, but has also shown how a lack of affordable housing has affected Marylanders.

“It’s our job as the government of the state to not only take care of businesses, but take care of people,” she said. “And right now, we’re not doing as good a job as we should.”

Elizabeth Shwe contributed to this report.