Del. Neil C. Parrott (R-Washington), who just lost a bid for Congress in the 6th District, is taking steps to run again.

Parrott filed paperwork Monday with the Federal Election Commission to become a candidate for Congress in 2022.

According to State Board of Elections returns that were updated Monday evening, Parrott took 42.7% of the vote against first-term Rep. David J. Trone (D), who was at 55.5%. Votes will continue to be counted through Friday. 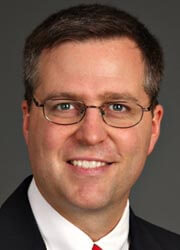 Parrott is clearly hoping that the 6th District boundaries, which currently include portions of liberal Montgomery County and then run west into more conservative territory in Frederick, Washington, Allegany and Garrett counties, will become more favorable following the upcoming round of congressional redistricting.

The current contours of the 6th District were drawn by Democrats in advance of the 2012 election ― and the new district lines enabled the Democrats to flip the seat for the first time in 20 years.

“This January, I will be going back to Annapolis as a State Delegate and will continue to work for you,” Parrott wrote in a letter to supporters on Saturday. “In 2022, Maryland will have a new Congressional Map. I will work with Governor Hogan to make sure the map is fair, and I believe that it will be much better than the current map.

“It is my belief that Western Maryland will once again be represented by someone from Western Maryland, and that Maryland Counties will be combined in a way that makes sense geographically, grouping people who care about similar issues together.”

Trone, who is personally wealthy and sunk at least $2.5 million of his own money into his contest with Parrott, is pondering a run for governor in 2022, and the district could become more competitive in an open-seat scenario. Trone’s plans for the upcoming election cycle could depend in part on whether the district boundaries change dramatically.

If the seat becomes open or the district lines become more favorable to the GOP, Parrott is unlikely to have the Republican field to himself, however. Parrott had the luxury of running for Congress this year without having to sacrifice his legislative seat; that won’t be the case in 2022.