“When we started this campaign over a year ago, some people thought I was crazy,” Scott said from Baltimore SoundStage Tuesday about 10:30 p.m., with some of his supporters on a Zoom screen behind him. “Some did not believe you could run a campaign against the status quo in Baltimore City and win, but Baltimore, you voted for change.”

As of 1 a.m. Wednesday, with about 160,000 early voting and mail-in ballots counted in the first batch of election results released, Scott led the race with about 72.1% of the vote. Wallace, a wealthy businessman, took 19.6%, while Republican Shannon Wright was at 6.4%.

At about 10:15 p.m., Wallace, a former Republican who had spent six figures of his own money on the campaign, called Scott to concede the mayoral race.

“This is clearly not the result that we all had hoped for,” Wallace said at an outdoor election night event held at La Cuchara Restaurant in Hampden Tuesday evening. “But it is what it is.”

Scott, who is 36, will become the youngest mayor in the city’s history — though he has served on the City Council for nine years. He’ll take office alongside a new City Council president, Del. Nick J. Mosby (D), and a new city comptroller, Councilmember Bill Henry (D).

At his victory celebration, Scott vowed to focus on the nitty-gritty of governance and bring innovation to City Hall.

“We can build a safer city, one that’s more equitable and accountable,” he said. “We can get the basic things right. We can pick up recycling and issue affordable water bills you can trust. We can fix this broken structure of city government. We can invest in our young people who are our greatest resource and we can create bold new solutions to some of our deepest challenges.”

During a brief interview at the polling place at Morgan State University earlier in the day, Scott said he felt confident about the election results and said he understands the needs of city residents in ways that most political leaders do not.

“It’s different when you’ve been the person that had the gun in front of your face,” Scott told Maryland Matters. “It’s different when you had to duck bullets, and no one else in this race understands that the way that I do. And really to use that experience ― that lived experience, along with my experience in the office to change Baltimore in consultation with the rest of the city is very exciting to me.”

During a televised mayoral debate last week, Scott contended that he knew city government “inside and out” and vowed “to root out corruption.”

“I do not care about the status quo,” he said during the debate. “This is not about money for me, it never has been. It’s about serving the citizens of Baltimore, making the city that I’ve lived in my entire life….a better place.”

Wallace depicted Scott as a “young version of an established politician” during the debate, suggesting that voters may not see real change under his leadership. As he cast his ballot at New Era Academy in Cherry Hill, the neighborhood where he grew up, Wallace told reporter “it’s time for a new coach and new game plan.”

Wallace said Tuesday night that his run is the first time that an independent candidate has appeared on the ballot “in Baltimore’s history.”

“This is the first time we have built what I … always called the ‘coalition of the ascendant,’” he declared before his crowd of supporters. “It is a coalition of Democrats, Republicans, independents, blue collar, white collar, educated, uneducated, affluent, not so affluent — but they have one common goal, and that’s to make Baltimore a better place than it is.”

Although Scott ended the night by promising real change in Baltimore City, he said city residents and leaders need to work together to achieve that change.

“We have to work together as a city unified to make Baltimore better,” Scott told reporters Tuesday night. “One person cannot fix things that have [been] problems that [have] existed longer than I’ve been alive.”

In addition to Mosby and Henry, Scott will be working with a City Council that will include five new members in a 14-member chamber.

The city’s other seats 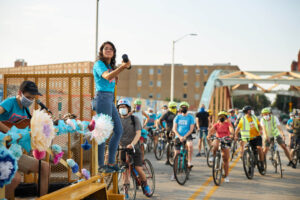 Green Party leaders weren’t quite ready to concede the race: Owen Silverman Andrews, the co-chair of the Baltimore Green Party, said they are still waiting until all the votes are counted “before speculating on how the outcome of this unprecedented race fits into the continued growth of the Baltimore City Green Party.”

“We are excited about extending the movement that has formed around Franca’s Green campaign,” he said.

Muller Paz ran a fierce campaign over the last four months. She raised around $130,000 for her campaign since entering the race in July, and received several high-profile endorsements — including from Democratic City Councilmember Zeke Cohen the day before Election Day.

Even with that momentum — some of it born from progressives’ disenchantment with Stokes, who faced a competitive challenge in the Democratic primary — Muller Paz was racing against the clock, introducing herself to District 12 voters. Stokes is a lifelong resident of East Baltimore who is completing his second term on the Council.

Stokes had not campaigned as visibly as Muller Paz in the general election and raised no money since May, according to his last two campaign finance reports.

But Democrats represent 82% of the district’s registered voters, and running against a Black incumbent in a majority Black district was another challenge for Muller Paz.

“His challenger, I guess by some, could be called brown, but in truth is white, and it is the white portion of the 12th District that is supportive of this candidate,” former city councilmember Carl Stokes (D), Robert Stokes’ predecessor (and no relation), said on WEAA’s “Real Questions with David Brown.”

As of 1:30 a.m. Wednesday, here are the other winners in the city’s elections. All are Democrats: