Staying up late as polls close and results pour in throughout the country; eagerly awaiting for the Associated Press to call the election; attending election watch parties with friends and family.

Election night has always been a high-stakes event in American politics, and often voters have had a clear idea of who their next president will be as news organizations declare likely victors based on partial results. But with mail-in ballots allowed to arrive for up to 10 days after Election Day in Maryland, it’s possible voters will have to wait longer than usual for clear results.

In Maryland, voters will not only be choosing a president and eight representatives to the U.S. House of Representatives, but new leadership in Baltimore City and Cecil County. Also before voters will be judgeships, state and local ballot initiatives and the leadership of several smaller Maryland municipalities, including Hagerstown and Takoma Park.

If the presidential election is a nationwide landslide one way or another, Goucher College political science professor Mileah Kromer said, voters may have a pretty good idea of who won on election night. If the results are closer, however, it might take more time for a winner to become obvious.

Kromer noted that, while news organizations and observers often declare a winner based on partial election night results, the official results are never certified on Election Day. She said it takes election officials time to come up with a final tally even in a normal year, and estimated that it may take longer thanks to the coronavirus pandemic.

“The results on election night are always just projections, and the official count is never done on election night,” Kromer said. “It does take some time after the election to actually tabulate those votes.”

In Maryland, state election officials allowed the canvassing of mail-in ballots to begin in early October. Local boards of elections will accept mail-in ballots until the morning of Nov. 13, although those mail-in ballots will need to be postmarked by Nov. 3.

When all the polls are closed in the state ― scheduled for 8 p.m. ― elections officials will begin to post results from early voting and mailed-in ballots.

On Monday, the State Board of Elections again urged voters to submit their mail-in ballots at drop boxes instead of by mail. Officials previously warned of widespread Postal Service delays and told voters to use the secure drop-boxes instead of relying on timely mail delivery.

“While we don’t anticipate any issue with ballots already cast by mail, we are closely monitoring reports from the United States Postal Service that delivery times continue to be considerably longer than normal,” Maryland Election Administrator Linda H. Lamone said last week. “In light of this, as we approach Election Day, we encourage voters to drop off their ballot at an authorized drop box. This will allow them to be confident their vote will be received and counted in a timely fashion.”

President Trump has questioned the legitimacy of ballots received or processed after Nov. 3. Tweeting last Friday, Trump wrote that “The Election should end on November 3rd., not weeks later!”

The Associated Press reported that Trump signaled he may pursue legal action to stop Pennsylvania officials from counting ballots they receive after election day. The battleground state’s top court recently allowed a three-day extension for ballots to be received after Election Day.

The U.S. Supreme Court decided not to block the extension in a 4-4 decision.

Kromer said Trump’s rhetoric over mail-in ballots causes problems “for the foundation of our democracy,” but said she’s seen a bipartisan push to educate voters over when to expect results.

“We stand by the results of this election and urge leaders across the country to do the same,” Jones said. “American democracy works best when we stand behind the common principles that bind our institutions together.”

Hogan said he and other officials are working with law enforcement to ensure the election runs smoothly, and emphasized that voting in-person is safe.

“Democracy is not a partisan issue,” Hogan said. “We are one, united Maryland.”

Joanne Antoine, the executive director of the voting rights group Common Cause Maryland, said she’s had several lengthy calls with voters worried about whether their mail-in ballot will be counted. She called Trump’s rhetoric a “scare tactic” to get voters to cast their ballot in-person rather than via mail.

During the first day of early voting last week, some voters told Maryland Matters that Postal Service policy changes and delays over the summer led them to cast their ballots in-person.

More than 2.3 million Marylanders have already cast their ballot by early voting or in the mail, and Antoine expects Election Day turnout could rival or even eclipse 2016.

“Voters realize this election is critical,” Antoine said. “They can’t afford to stand on the sidelines and do nothing.”

The current record is held by President Lyndon B. Johnson, who defeated Republican Barry Goldwater with a roughly 31 point victory margin in the 1964 presidential election. 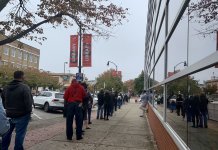 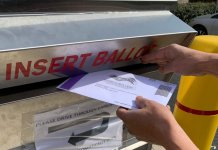 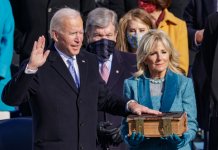