Small business-owners in Takoma Park and Silver Spring who have lost revenue — or have been forced to close entirely — due to Purple Line construction and the COVID-19 epidemic renewed their pleas for state assistance on Monday.

They warned that if Gov. Lawrence J. Hogan Jr. (R) does not release $2 million in funds set aside to help mom-and-pop stores in the path of the ill-fated rail line, many will not be able to survive much longer.

In a statement to Maryland Matters, Franchot noted that he opposed Hogan’s unsuccessful push to slash the small business aid fund by 50% over the summer.

“As a longtime supporter of the Purple Line and champion of Maryland small businesses, I find it unacceptable that funds have not gone out the door to help businesses impacted by this project,” the comptroller said.

“I urge the Department of Commerce to send my agency the grant requests and we will send the payments immediately,” he added.

Several small business owners and political leaders spoke to reporters outside an alterations store that advocates said was forced to shut due to the Purple Line and the economic downturn.

“This is not just an inconvenience for a few months. We’ve been living this for years and now the future is uncertain,” said Takoma Park Mayor Kate Stewart. “We are tired of hearing from the state and Gov. Hogan that they share our frustration and ask for our patience. We are out of patience and we do not have the luxury of time.” 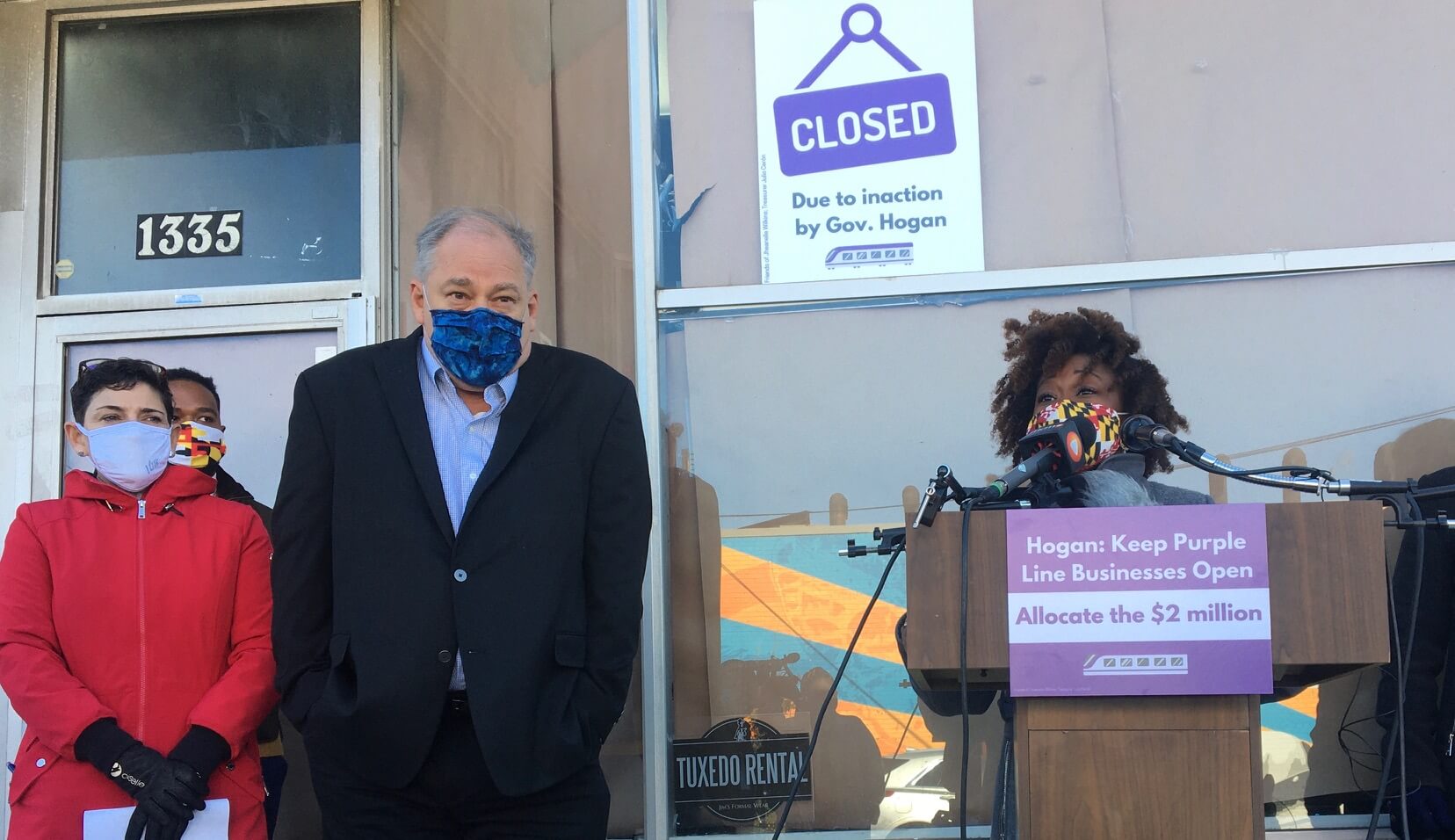 Work on the Purple Line ground to a halt after the state’s private-sector construction team abandoned the project in September because of a years-long dispute over cost overruns for which each side blamed the other. Lawsuits have been filed and the Maryland Department of Transportation has taken over management of numerous contracts while it determines how to resume construction.

The construction pause has left numerous Montgomery and Prince George’s neighborhoods — including several that are home to recent immigrants — torn up and unsightly.

The push to get state help to small businesses affected by the project’s demise was spearheaded by Del. Jheanelle Wilkins (D-Montgomery), who noted that the General Assembly has already provided funding to help mom-and-pop store owners.

“Why must these businesses wait when there are funds sitting in the budget — $2 million — to help support them and keep them open,” she said.

The state has not released grant funds in part because the General Assembly failed to pass legislation creating a defined program, the governor’s spokesman said in an interview.

“They didn’t pass the bill that creates the program,” Michael Ricci said. “We can’t assign legislative intent to a bill that didn’t become law. There’s no means or mechanism to distribute the funding.”

In an accompanying statement, Ricci said there are programs providing some relief for these small businesses.

“We recognize the predicament all of our local businesses are in as we navigate this unprecedented period, and we are working to provide relief through a number of recovery programs,” he said.

But Elrich said that Montgomery County stepped up years ago to assist shops that were impacted by the redevelopment of downtown Silver Spring because it was a government-backed project that caused economic distress — and the same principle should apply with the Purple Line.

“This is a problem. His management has made this worse than it needed to be and the money is there,” the executive said of the governor. “He doesn’t even have to find it, just spend it.”

With interest payments on its “Private Activity Revenue Bonds” due every 30 days and the project in limbo, Purple Line Transit Partners, the consortium that is funding and managing the project, was able to secure an additional 30-day forbearance period from its bondholders on Monday. The reprieve moves the deadline for interest payments to Nov. 30, to give MDOT and PLTP more time to negotiate a path forward.

The state is also scrambling to line up new insurance. Chubb Limited, a New York-based insurer, notified the Maryland Transit Administration on Sept. 30 that it was “immediately suspending” its policy with Purple Line Transit Constructors (PLTC), given the consortium’s decision to bolt the project.

In a statement to Maryland Matters, MDOT insisted that insurance coverage on the 16.2-mile rail line remains intact.

Transferring the policy to MTA will result in “some additional cost” to taxpayers, the agency conceded, but it would not disclose how much.

In a letter to Hogan late last week, several members of Maryland’s congressional delegation said their “concerns about the fate of the project have grown exponentially” since the demise of the state’s $5.6 billion, 36-year contracts.

“Given the importance and size of this project, we urge you to use this time to negotiate with PLTP and, at the same time, continue making the necessary arrangements to transition the project to MDOT if a settlement is not reached,” lawmakers wrote.

“It is imperative to find a path forward as these delays mean that Maryland residents are the ones that suffer.”