When the Republican Party fell apart in 1964 after the smashing defeat of Barry Goldwater, the leftovers recruited a master grass-roots organizer, Ray Bliss, to put the pieces back together again.

After George McGovern was sent packing in 1972, Democrats eased out Larry O’Brien as party chairman and replaced him with a smooth-talking Texan, Robert Strauss, to pull together the clashing factions into a cohesive party.

Bliss’ organizing skills rebuilt the GOP into the effective machinery that led to the election of Richard M. Nixon in 1968. And Strauss’ consensus-building eased the way for the presidency of Jimmy Carter in 1976 and Strauss’ feathering of his own nest with ambassadorships and a lucrative partnership in a blue-chip law firm.

In real life, Bliss was chairman of the Ohio Republican Party who kept the state’s GOP intact and largely Republican though good days and bad. Strauss was a savvy old schmoozer in Texas Democratic politics going back to the days of Lyndon Baines Johnson’s first campaign for Congress in 1937.

The current job-holders are Tom Perez, of Montgomery County, on the Democratic side, and Ronna McDaniel, of Michigan, the Republican chair and a niece of Sen. Mitt Romney (R-Utah). Perez was Maryland’s secretary of labor, a Justice Department official in the Obama administration and then President Obama’s second-term Labor secretary. And McDaniel is former chair of the Michigan Republican Party.

Both Perez and McDaniel are probably buffing up their resumes for the post-election job hunt that usually follows a change of parties at the White House and a president who wants his own pick at national headquarters.

Party chairs are technically elected by members of the national committees, but usually with a nudge from an incumbent president, in one case, and from a titular leader in remission from the out party, in the other.

Comes now the waiting wreckage after the 2020 election, when both parties must deal with face-saving realignments or be consigned to the junk heap for a good while — the Republicans, if all indicators are correct, how to remake themselves after President Trump’s toxic presidency, and the Democrats an accommodation by a moderate president with its restive left flank, which has been strategically quiet throughout the campaign.

So it comes as a revealing flash that Maryland’s Republican governor, the high-polling Larry Hogan, is flacking for the dead. He’d like to take the Republican Party back to the somnambulant days of Ronald Reagan, his “hero in politics,” he says, which is exactly the problem with today’s Republican Party. It can’t get a grip on change, or get over the past. Hogan cast his write-in vote for Reagan.

Contrast Hogan’s necroflackery with the very present-tense vote for “the soul of the nation” and for “character” of Michael Steele, Maryland’s former lieutenant governor and former chairman of the Republican National Committee. Steele, now a political commentator, is also a declared member of the Lincoln Project, a glimmering roster of anti-Trump Republicans. Steele said flat-out that he is voting for Joe Biden, the Democrat.

Hogan got a savory whiff of adoring attention during his year as chairman of the National Governors Association. Add to that the list of retainers that courted Hogan to run for president this year as the antidote to Trump, and the sum total is a heady ego trip to the political future.

Hogan has not been shy about wanting a role in the future of Republican politics. He does not discourage speculation that he might consider running for president when his final term as governor is up in early 2023.

But he also allows that he might settle for helping to re-make the Republican Party after Trump’s destructive reign and now, we find, into the image and likeness of Reagan. (Hogan is an anti-tax politician. But Reagan, his hero, raised taxes 11 times as governor of California and as president.)

Spiro T. Agnew was a few white envelopes away from the presidency. But in 1968, he failed to deliver his home-state of Maryland for the Nixon-Agnew ticket. Nixon was so infuriated that on election night he called Agnew and warned him that if they lost the election because of Maryland, Nixon would make certain that Agnew’s career in politics was over.

Political parties have lost their moxie. This is especially true of the party that occupies the White House, wherein the president and his staff usually assume the roles of political strategists and decision makers.

This year, for example, Trump declared that the Republican National Convention, run by the GOP National Committee, would have no platform. HE, in one of his grand anthropomorphic gestures, would be the platform, declaiming, in effect, a referendum on himself and his presidency. It is the first time in recent history that a major political party entered a presidential election without a platform.

Under Trump, the RNC has become just one more presidential fan club that regularly showers its adulations on a president for whom too much attention is never enough.

Similarly, President Obama allowed the Democratic National Committee to languish during his eight years as president by diverting funds and usurping its role. Rep. Debbie Wasserman Schulz, of Florida, who held the dual rule as party chair, was forced to resign amid the disaster the DNC became.

In earlier days, the role of party chairman was a powerful post. They not only served as principal organizers, strategists and cheerleaders for get-out-the vote drives, but also as fundraisers and dispensers of money to state parties as well as candidates. The national committees were the fulcrums of the state parties. But most of all, party chairmen enforced discipline within the party ranks.

Two of the most powerful and legendary party chairmen in modern politics were John Bailey, of Connecticut, who was Democratic National Committee chairman during the Kennedy-Johnson years, and Leonard Hall, of New York, who was the Republican National Committee chairman during the Eisenhower years. In those days, politics resided within the two national parties, and governing remained within the White House and Congress. Today they are a blur.

The rise of political action committees, and the Supreme Court’s 2010 Citizens United ruling that smokestacks are people, further neutered political parties by diverting control of millions in campaign funds to individual candidates and campaigns and away from political parties.

Candidates for federal office no longer need to rely on the national parties for funds but are now able to finance campaigns on their own and with the help of the new breed of firms that specialize in political fundraising. The loss of power at the top of the political pyramid also passed down to state parties that have surrendered their pass-through roles as dispensers of largesse to state and local candidates.

Both national committees are damaged and in need of repair. Either fix them or forget them.

Opinion: East-West BRT Is a Smoke Screen for Transit Disinvestment 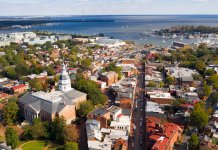