The Maryland Catholic Conference on Sunday celebrated the news that Pope Francis plans to elevate Washington, D.C., Archbishop Wilton D. Gregory to the College of Cardinals during a ceremony on Nov. 28.

Gregory will become the first Black cardinal in U.S. history.

In a surprise announcement from a window in St. Peter’s Square Sunday morning, the pontiff said he was appointing 13 new cardinals, including Gregory. Gregory, who is 72, has served as archbishop of Washington for the past year — and previously was archbishop in Atlanta for 14 years. He headed the National Conference of Catholic Bishops in the early aughts. 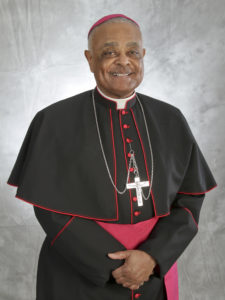 Archbishop Wilton D. Gregory of Washington, D.C., who will be elevated to the status of cardinal next month. Archdiocese of Washington photo.

“With a very grateful and humble heart, I thank Pope Francis for this appointment which will allow me to work more closely with him in caring for Christ’s Church,” Gregory said in a statement released by the Washington Archdiocese on Sunday.

Jenny Kraska, executive director of the Maryland Catholic Conference, called Gregory’s elevation “a great honor for him, for the people he serves, and for all of us here in Maryland.” The church, she said, “will gain from his wisdom, kindness and faith.”

Kraska also noted the “special significance” of Gregory’s appointment during a time of racial reckoning in the U.S. Earlier this month, he participated in a virtual town hall on police reform in Maryland and in June, he and the other bishops of Maryland released a letter on racial justice, expressing regret for the Catholic church’s role in perpetuating racism in the U.S. and in Maryland.

“Throughout his ministry, Cardinal-elect Gregory has sought to address wrongs and bridge differences,” Kraska said.

John King on Climate: ‘Many of My Opponents Have Vague Policy Platitudes’

John B. King Jr. released a climate action plan earlier this month, including provisions to get Maryland to net-zero carbon emissions by 2035.

The Roman Catholic Church is the world’s largest precinct organization. Civilization’s oldest Christian religion has 1.33 billion constituents scattered around the globe. They are…

The Roman Catholic Church is engaged in a holy war over Joe Biden’s candidacy for president. The breach is more a matter of individual…