Hues of red, orange and yellow are sweeping across the region in one of the most vibrant autumns that the mid-Atlantic has seen in several years.

According to the Maryland Department of Natural Resources latest Fall Foliage Report on Oct. 22, leaves in Western Maryland have already hit their peak, while central Maryland and the Eastern Shore should see the most colors this week or next. The 2020 Fall Foliage Prediction Map, produced by smokymountains.com, predicts that Maryland will reach peak color the week of Oct. 26.

“The dry weather in Maryland has made the fall colors extra vibrant this year,” forester Aaron Cook said. “We haven’t really had the coastal storms that we’ve had in years past, which bring down foliage.”

Cook says that 2020 is one of the best years for fall leaves that he has seen in a while.

“Everyone says this is a fantastic year for leaves in the mid-Atlantic,” Cook said. “And it’s fantastic almost anywhere you go.”

Maryland is at its peak, and it’s time to hit the roads and trails. Here are some great places to see the changing leaves: 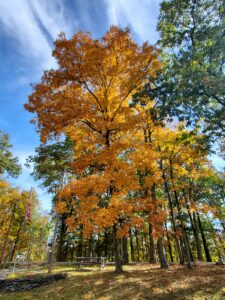 On the ridge of the Catoctin Mountains in Frederick County, Gambrill State Park offers 16 miles of trails and dramatic views of the Frederick and Middletown Valleys. Yellow poplar, hickory and oak trees make for incredible fall color. This year, Cook says the hickory is more vibrant than usual, having turned a sulfur yellow.

With no trail signs or officially posted trail names, the Frederick City Watershed is a lesser-known area that is less accessible, due to the lack of paved roads. But with over 7,000 acres of forest land filled with changing oak and birch, the area offers rewarding and beautiful fall hikes, ideal for spotting brightly colored leaves.

Stretching 32 miles along the Patapsco River through Howard and Baltimore counties, Patapsco Valley State Park  and its trees can be viewed from trails as well as from inside your car. More than 200 miles of paths snake through yellow poplar and hemlock groves. 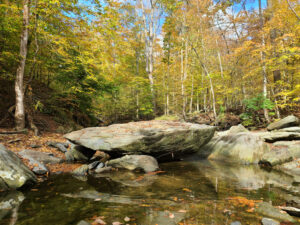 But, Park Ranger Alyssa Myers notes that trails are extremely crowded this year, and if possible, a mid-week hike would offer more solitude. Patapsco Valley has had to close several times this year after reaching capacity.

The C&O Canal Scenic Byway winds 236 miles along the Potomac River from Washington, D.C. to Cumberland, Md. and takes from 6 to 8 hours to drive. The C&O Canal Towpath stretches for 184.5 miles next to the byway and is a favorite of bikers, joggers and hikers, who pass changing silver maple, sycamore and oak trees. 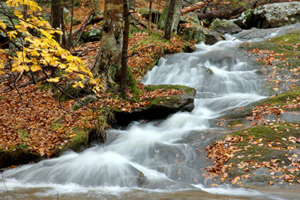 In the heart of the picturesque Catoctin Mountains, near Thurmont, beech and hickory trees are turning gold and maples are turning red.

Located in Caroline County on Maryland’s Eastern Shore, Tuckahoe State Park offers 20 miles of sylvan trails, a quiet creek and a 60-acre lake. Canoe or kayak around the lake and take in changing tulip poplar, sycamore and oak trees, a stunning contrast next to dark green loblolly pines.

The Harriet Tubman Underground Railroad Byway combines history with quintessential Eastern Shore scenery and great viewing of fall colors. Driving the 125 mile route through Maryland, make stops to explore the secret network of trails, waterways and safe houses used by enslaved people fleeing north to escape slavery.  The byway also goes through Martinak State Park, which has more than 30 species of trees. And it extends another 98 miles through Delaware to Wilmington.