This should be a golden moment for Marilyn and Nick Mosby, Baltimore City’s very own power/glamour couple.

Nick Mosby, a state delegate, is about to be elected City Council president. And Marilyn Mosby, who has always enjoyed a high profile, will bask in the reflected glow if a former Black woman prosecutor, U.S. Sen. Kamala D. Harris (D-Calif.), is elected vice president.

The future ought to be so bright they’ll need shades.

Instead, the Mosbys find themselves fending off uncomfortable questions.

This week, The Baltimore Sun reported that the IRS has placed a $45,000 lien against the couple’s property for three years of federal taxes they owe. And Marilyn Mosby  triggered a city ethics investigation when she recently started private consulting businesses.

The Mosbys are hardly the first family in America to run afoul of the IRS, though this is the second lien the agency has put on their property, according to the Sun article. And considering how much the Trump family has tried to elude making tax payments, as the recent blockbuster New York Times series outlined, the $45,000 or so the Mosbys owe the feds is chump change.

Still, when you are the city’s top prosecutor, you want to stay well ahead of the law and the tax man, particularly if you have higher political ambitions, which Marilyn Mosby so clearly does. And as for Baltimore residents, what do Nick Mosby’s tax troubles say when voters are about to elect new leaders to the top three offices at City Hall ― a literal and metaphorical new beginning as the city tries to turn the page from veteran and unsavory officeholders?

The Mosbys, like any family, deserve the benefit of the doubt here. But this is surely a stain on them and a bummer for their beleaguered city.

The week that was

If a book is ever written about the 2022 gubernatorial election in Maryland, last week may be seen as extremely consequential.

The inside-baseball news that Len Foxwell, long regarded as state Comptroller Peter V.R. Franchot’s political brain, was leaving the comptroller’s office and, as a result, his campaign for governor, was a major political earthquake.

Political journalists and other insiders tend to inflate and romanticize the influence of an especially savvy ― and media savvy ― adviser on the political dynamic. But in Foxwell’s case, a lot of the mythology was true.

Franchot, no doubt, has innate political talents and a distinct renegade image that he’s been stoking since his very first campaign in 1986. But Foxwell clearly harnessed Franchot’s talents and took him to a higher level of success than surely Franchot himself ever imagined.

Foxwell managed to steer Franchot’s long career of shape-shifting into a coherent, if not always believable, political arc and narrative. And his obsessive outreach to key, disparate, and occasionally forgotten parts of the state’s political universe especially paid dividends.

What does Foxwell’s departure from Franchot-land mean, exactly? That remains to be seen.

Foxwell has certainly helped assemble a political machine that Franchot can build on. He’s hired smart young political operatives in the comptroller’s office and engaged a creative national media adviser, Julian Mulvey, and a top-flight pollster, Jill Normington. Franchot’s frequent travels around the state, on the taxpayers’ dime, have built a lot of goodwill that he can capitalize on in a gubernatorial run.

Yes, Franchot can still be a formidable candidate in 2022 ― maybe even the early frontrunner. But he will miss Foxwell’s daily machinations and his ability to drive the political conversation.

What’s more, it becomes less clear now that Franchot will even make the race. The vision of electing Franchot governor ― and the blueprint ― was more Foxwell than Franchot. Will Franchot, who will be 74 on Election Day 2022, even want to make the race without Foxwell pushing him? No doubt he’d like the glory of being governor, but does he want the day-to-day tsuris that comes with the job? Let’s see how his team picks up the pieces in the days ahead.

First, John B. King Jr., President Obama’s second secretary of education, launched an advocacy group, Strong Future Maryland, to promote progressive policies in Annapolis. But it is not unreasonable to think that this is also an effort to elevate King’s political profile in Maryland in advance of a possible bid for governor. The fact that he’s raised over $1 million ― which can’t be verified under the rules governing a 501c4 organization like Strong Future Maryland ― is eye catching.

Ordinarily, Maryland voters should look warily ― or shrug ― when someone who has had great success in Washington, D.C., but not much of a footprint at home starts to make noises about becoming more involved in state politics and policymaking. But King does not have a conventional life trajectory, and his unique experience and expertise, and the issues he plans to spotlight with his advocacy group, may make him right for the moment ― and at a minimum makes him worth watching. 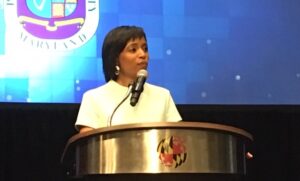 Last week also saw the release of the first public poll on the 2022 gubernatorial election, and while the results were largely fractured on the Democratic side ― and awfully premature to read too much into ― the showing of Prince George’s County Executive Angela D. Alsobrooks ― in second place in a hypothetical nine-way race, with 13% of the vote ― is noteworthy. It reinforces the notion that Alsobrooks, even though she hasn’t even finished her second year as county executive, is a hot political commodity who is going to be under an awful lot of pressure to run for governor this time.

So the question then becomes whether the opportunity aligns with her own internal political clock.

GOP changing of the guard

But what does the ideological shift mean in a chamber dominated by Democrats? The Democratic caucus is moving steadily to the left and an easy explanation is that the Republican shakeup could be seen as a reaction to Democrats. 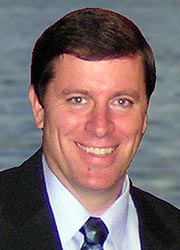 But Jennings and Hershey were pretty skillful leaders ― they made Senate Republicans surprisingly relevant during debates in the Finance Committee, where both served, and during high-profile floor fights. It seems unlikely that Simonaire and Hough will be able to duplicate their predecessors’ success in that respect ― or have the same line into Democratic leadership.

What they may be able to offer is high-voltage policy battles and messaging, especially on spending and social issues, and in this heavily divided era that might gin up campaign contributions and political ground troops. It’s too early to know what Senate district lines will look like or what the national political environment will be like and how all that might impact the Maryland GOP’s prospects in 2022 and beyond. But Senate Republicans at least are signaling that at a minimum, they’re spoiling for a fight.

The White House on Friday announced plans to speed up the use of infrastructure law funds to replace lead pipes in underserved communities, with…