In 2020, the number of visitors to Maryland state parks is unprecedented.

According to the Department of Natural Resources, more than 17.1 million people visited Maryland’s state parks between Jan. 1 and late September, already surpassing the record number of visitors in the park in any year. In 2019, the state park system saw 14.8 million visitors.

“It’s very similar to park systems across the U.S. in terms of there being a surge in visitors,” said Amanda Mock, director of administration for the Maryland Park Service.

During the COVID-19 pandemic parks have been a respite for people who are stuck at home and find their usual vacation and recreation options closed, less attractive or unaffordable.

Through Labor Day Weekend, the Maryland Park Service reported a total of 248 capacity closures, compared to 101 by that time last year.

The most popular Maryland parks — Patapsco Valley in Ellicott City, Gunpowder Falls in Middle River, Sandy Point outside Annapolis, and Assateague near Ocean City — each draw more than one million visitors annually.

But with 140,000 acres under Maryland Park Service management — from mountainous Garrett County in the west to Assateague Island off the Eastern Shore — there are plenty of choices.

Below are five parks that see many visitors, but don’t have many capacity closures, and five parks which see fewer visitors and are easily accessible. 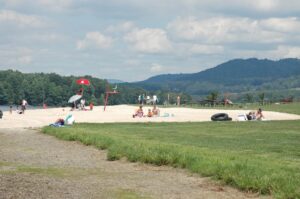 Its most prominent feature, Lake Habeeb, is known for having the “bluest water in the state.”

The lake is fed by Rocky Gap Run, a river that winds by sheer cliffs and forests through a mile-long gorge. Evitts Mountain overlooks the lake, where visitors kayak, boat and canoe.

The park also has an amphitheater, nature center and casino resort.

Deep Creek Lake in Garrett County is western Maryland’s premiere destination for swimming, relaxing on the beach or picnicking. At the six-square-mile man-made lake, you’ll find boaters, kayakers and fishers.

Nearby, 20 miles of trails wind through oaks and hickories and are accessible for hiking and mountain biking in spring, summer and fall, and for snowshoeing, cross-country skiing and snowmobiling in winter. The park also allows hunting in designated areas at specific times of year, as do many of Maryland’s state parks.

One trail leads to Brant Mine, a historic coal mine and homesite, dating to when the area was mostly a logging and coal mining region. Visitors can learn about the park’s history and cultural heritage at the Deep Creek Discovery Center. 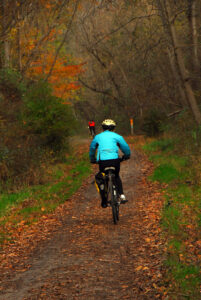 The original railway operated until 1972, connecting passengers between Baltimore, York, Harrisburg and beyond.

In the 1980s the abandoned rail line was purchased and turned into a recreational trail, which is used widely by bikers and joggers.

Along the path you can see old whistle posts, mile markers and light signals.

This park is managed as part of the Gunpowder Falls State Park complex.

Located where the Elk River flows into the Chesapeake Bay, the park is home to historic Turkey Point Lighthouse.

Visitors can hike, boat, hunt, fish and crab while looking over sweeping views of the Bay.

Point Lookout in St. Mary’s County sits where the Potomac River runs into the Chesapeake Bay. With nature trails, water trails, beaches, a lighthouse and a fishing pier, the park combines recreation with a rich history dating to colonial times. 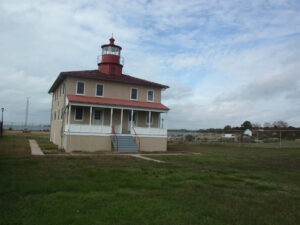 Explored early by Captain John Smith, Point Lookout was raided by British forces during the American Revolution, and used as a lookout post to watch British ship movements during the war of 1812. During the Civil War, Point Lookout served as a crowded army prison camp for Confederate soldiers.

Today, the park has a war memorial and cemetery, as well as a Civil War Museum. 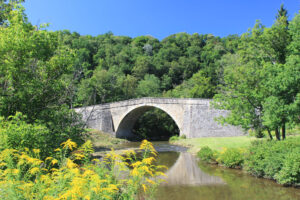 Casselman Bridge, one of the oldest surviving bridges in the nation, was built in 1814 to connect parts of the federal government’s first public highway — the old National Road. When it opened to traffic in 1817, the bridge was the largest single-span stone arch bridge in America, and it helped create a wave of western expansion.

Lying in the far western corner of the state, just east of Grantsville, the historic bridge extends 350 feet and spans 80 feet over the Casselman River.

Today, visitors use the four-acre park for picnicking, fly fishing and photography. Just east of the park is Stanton’s Mill and the restored log cabin craft shops of Spruce Forest Artisan Village. 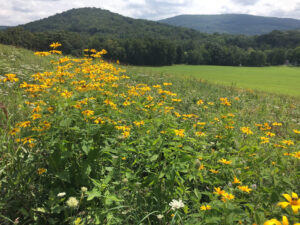 The Friends Store, which served as a center of Sang Run’s community life, sells penny candy, old-time soda, local jams and souvenirs (when not closed, as it has been recently, because of the pandemic). 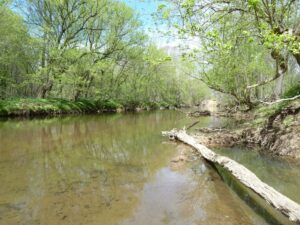 The park, in Howard and Montgomery counties, follows 12 miles of the river through 6,700 acres of natural, wild and farm lands.

Over 220 species of birds have been spotted in Merkle, where lowland forests, open fields, swamps and marshlands offer perfect opportunities to watch wildlife.

Home to one of the most diverse bird populations in Maryland, Merkle, in Prince George’s County, is also wintering ground for the largest concentration of Canada geese on the Chesapeake Bay’s western shore. 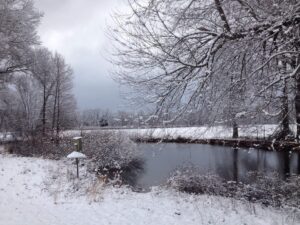 It was named after conservationist Edgar Merkle (1900-1984), who devoted much of his life to protecting wildlife.

In addition to birds, visitors can spot red foxes, groundhogs, and more while hiking, biking and fishing there.

Inside the visitor center, a large bird-viewing area has binoculars and field identification books. Outside, there are five stocked fishing ponds and four hiking trails.

Near Crisfield on the Eastern Shore, Janes Island offers a pristine look at the Chesapeake Bay. 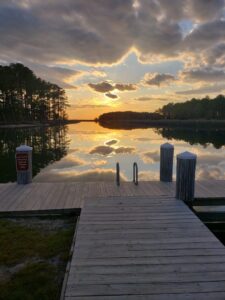 Stunning views and isolated beaches abound, with over 2,900 acres of saltmarsh and over 30 miles of water trails.

Visitors fish, crab, motor boat, paddle and bird watch. Camping is also available at the park, and three backcountry campsites can be found on the water trails for overnight expeditions.

Did someone send you this story? Sign up to have our daily newsletter sent to your email in-box six mornings a week. Free.

Some environmental groups are eyeing the 2023 farm bill as a potential boon for fighting climate change.