I am the mother of Gary Hopkins Jr., who was killed by law enforcement in Prince George’s County. I am the co-founder and executive director of the Coalition of Concerned Mothers.  Last year, I penned an op-ed in The Washington Post, “My son was killed by police 20 years ago. Nothing has changed.”

In the year since, and especially these past few months, Maryland politicians have saturated our airwaves, newspapers and social media with promises to root out police violence. Day in and day out, legislators publish lists of police reforms, convene workgroups, and even sent a letter to the governor urging him to enact police reforms — while the General Assembly has itself failed to act for years.

I am sad to say that our elected leaders have proven they are no more than masters of the art of deception — their smoke and mirrors show families like mine that they have endless hours to talk, but there has been no meaningful action. Even legislation that has been passed fails to address the root of the problem, namely the practice of police policing themselves.

We must put power in the hands of the communities that the police are sworn to serve and protect.

In June, the Coalition of Concerned Mothers, together with almost 100 organizations, called on legislators to pledge their support for five key reforms:

Despite their progressive rhetoric and oft-stated solidarity with the Black Lives Matter movement, when our legislators were asked to commit to doing their job — supporting specific legislative reforms to save Black Marylanders’ lives — the excuses came fast.

Two Montgomery County delegates refused to pledge their support — saying that asking legislators to commit to reforms was “bad for government” and “undemocratic.” This from the same legislators who just signed a petition asking Gov. Larry Hogan to enact policing reform himself. The hypocrisy is too much to bear. 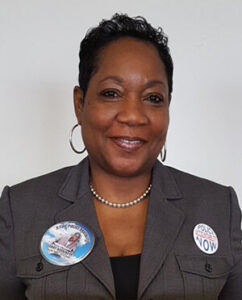 Perhaps the most insulting response of all came from legislators in leadership positions: committee and subcommittee chairs and vice chairs who hide behind a concern that their own commitment may unduly influence the members of their committees. Leaders who don’t influence their colleagues aren’t leaders, are they?

Maybe it’s best to know now that the leadership of the Maryland General Assembly is unwilling to leverage its influence to save Black lives. A little honesty might be refreshing.

For my family, justice is not measured by the number of bills a committee chair types on their letterhead, nor the number of meetings a workgroup convenes, nor the number of tweets legislators hurl at Gov. Hogan. For me, my family, my son and all those crying for justice in this moment, progress will be made when lawmakers commit to supporting these five police reforms and actually vote them into law.

The 33 legislators who pledged to support meaningful police reforms are listed here. We are waiting for the other 188 to show up and match their platitudes with action.

The writer is the co-founder and executive director of the Coalition of Concerned Mothers.