House Minority Leader Nicholaus R. Kipke (R-Anne Arundel) said possible committee assignments for Thiam include Ways and Means and Appropriations, because of her background in education and budget interests.

“Another history maker,” Jones said of Thiam, pronounced “cham,” during the livestreamed ceremony, which featured a masked Speaker, Thiam, and her husband, Malick, and sister, Jackie Hutton, as well as other legislators scattered off-camera throughout the nearly empty chamber.

Jones assumed the role of House Speaker on May 1, 2019, after a unanimous vote following the death of Speaker Michael E. Busch (D). Jones became the first female and first African-American speaker in Maryland history.

Thiam, a 51-year-old native of Raeford, N.C., according to her legislative biography, also made history when she became the state’s first Black female Republican legislator. The Washington County Republican Central Committee selected her on Sept. 21 and Gov. Lawrence J. Hogan Jr. (R) appointed her on Sept. 23 to fill the House of Delegates seat vacated by now-Sen. Paul Corderman (R-Washington). 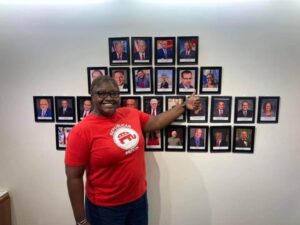 Kipke spoke with Capital News Service on Sept. 23 about Thiam’s background as an educator and her interest in working on the state’s budget.

“She would be well-suited for the Ways and Means Committee,” Kipke said, after stating that no appointment decisions had been made. “She has expressed an interest in being involved with the budget process…so the Appropriations Committee would be a good fit for her.”

“From our central committee’s point of view, we look for fiscal conservatives. We are against raising taxes,” said Washington County Republican Central Committee Chair Jerry DeWolf. “Americans are hurting, especially those in western Maryland, and the last thing we want to consider is raising taxes.”

DeWolf said committee members knew Thiam would be their voice in Annapolis to help the state “stay within our means.”

She has also worked in special education for over 20 years in both public and private Maryland schools as a teacher and, later, as an administrator managing teaching staff and budgets as well as students with special needs.

“She’s not a new face to the central committee,” DeWolf said. “We know her well, we respect her, and she has been a foot soldier for many years.”

Thiam “converted,” according to DeWolf, from being a Democrat to a Republican, in 2012. Since, she has run for public office, including for the Hagerstown City Council. DeWolf said she was selected from that race to be their county’s delegate.

“I believe in the mindset of what being fiscally responsible means, even if I don’t always practice it on a personal level,” Thiam said. “It means looking at the budget and line items and where the money is allocated.”

Thiam said that, although she is not a Certified Public Accountant, she does have experience managing budgets and budget shortfalls from working as director of education for the Community School of Maryland, which is managed by Community Services for Autistic Adults and Children Inc.

Thiam now works as a Behavioral Health Technician for Achieving True Self, which, according to the organization’s website, uses applied data to work collaboratively with families of children with autism. And she said she plans to apply an analytical approach to the state’s budget process.

She said that perspective is important, particularly with an economy significantly impacted by the COVID-19 crisis.

“I’m looking forward to working in Annapolis on behalf of District 2B in Hagerstown and for the citizens of Maryland,” Thiam stated in an Oct. 6 press release from the House Minority Caucus. “I optimistically embrace the great work we’ll get done in the General Assembly as we work together collaboratively. I will always be guided by the fact that I’m a public servant who represents the constituents.”

Police reform has been an issue of concern to both parties and Kipke addressed it when discussing Thiam’s appointment.

“Every Republican is supportive of meaningful and helpful police reform that improves public safety,” he said. “We believe that the defunding police programs will make communities less safe for all people, especially in communities with high poverty. While Baltimore is experiencing daily chaos and violence, many of us feel that we should be focusing on solutions to that problem and not discussing efforts to defund the police.”

Thiam’s historic appointment at a time when racial disparities are in the national spotlight has not escaped her notice.

“We put a lot of emphasis on the race part, although I’m humbled by being the first,” she said, expressing appreciation for the role she’s been given. “That’s wonderful, but I do come with a strong knowledge and educational background and I’m rooted in my community.”

Thiam and Parrott joined constituents at a “Trump Bus” event on Sept. 26 in support of their party’s presidential nominee.