President Trump got what he wanted on Monday — to bolt Walter Reed National Medical Center just in time to make the evening news.

But his return to the White House came amid a swirl of criticism and questions — and a cascade of bad news.

Having mocked those who wear masks, Trump is now the most famous COVID-19 patient in the world. His age and weight are potential impediments to a full recovery.

His doctors have presented contradictory information about his condition and treatment. 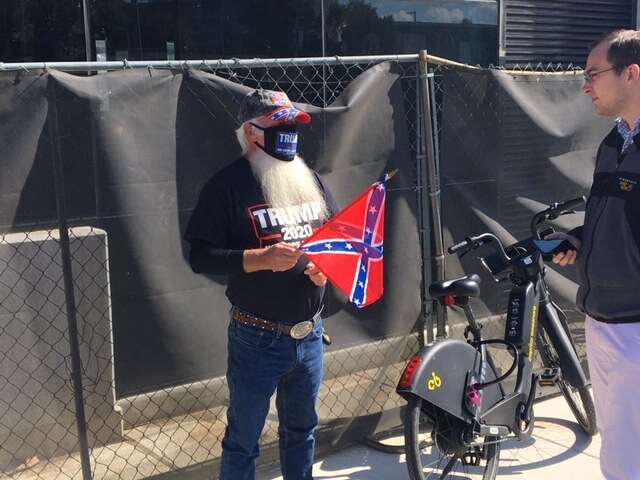 An unidentified supporter of President Trump’s near Walter Reed National Medical Center in Bethesda on Monday. Photo by Bruce DePuyt.

His decision to briefly leave the hospital on Sunday evening, so he could wave to supporters along Rockville Pike, put the lives of his Secret Service detail needlessly at risk. And at least one leading medical professional said the incident raised questions about his ability to make sound decisions.

Members of the West Wing staff — and others who attended recent White House and Trump campaign events — announced new COVID-19 infections seemingly by the hour.

Republicans continued to watch their chances of holding the White House and the United States Senate become more shaky.

And there were growing doubts about Senate Majority Leader Mitch McConnell’s ambitious timeline for rushing hearings and a vote on Supreme Court nominee Amy Coney Barrett.

Despite all that — a knot of about 80 Trump supporters stood along security barricades outside Walter Reed on Monday, seemingly impervious to all the chaos.

Their goal was simple: to bolster the spirits of the coronavirus-infected president whose poll numbers — never great — were slipping by the day.

“I’m just here to say a prayer and wish the First Family well,” said a woman who gave her name as Ellen Miller, a Northern Virginia resident.

“I want to wish the president and the first lady well,” he said. “We want him to get better and everyone else who has it, too.”

Supporters held Trump banners and the American flag, and they waved at passing motorists. Music — including lots of Billy Joel and a metal guitar-heavy version of the “Rocky” theme — blared from a loud speaker.

About half wore masks.

Horns honked relentlessly, though some drivers raised the middle finger as they drove past.

Journalists from around the globe covered the spectacle from across Rockville Pike.

“This is amazing,” White said as he took in the scene. “This is fun. I love the American flag and enjoy the United States and my freedoms. So any chance I get to wave my flag…”

Trump has gone mask-less the entirety of the pandemic. His staff, his campaign, his followers and much of the conservative universe have followed his lead.

The Sept. 26 White House event announcing Barrett as Trump’s pick to fill a Supreme Court vacancy is widely viewed as a “super-spreader” event. The decision to pack people into the Rose Garden without masks appeared at the time to be an embarrassing denial of basic science, and the events of the last week have only reinforced that view.

But not outside Walter Reed. Not for the true believers.

“I don’t know what to say to that,” said Miller, when asked if the president and those around him should have been wearing masks all this time. “Medically we don’t know if masks even work.”

The virus “went all the way to the White House,” she added. “I know that they take all the precautions that they need to, as far as people getting tested. It just goes to show that it’s a serious virus.”

White had a piece of red cloth that looked like a bandana around his neck as he talked to a reporter.

“Aren’t viruses so tiny that they go through masks anyhow?” he said. “I imagine everyone will get [COVID-19] eventually.”

Bethesda resident Greg Gasper — hungry for some pizza — lamented that he wasn’t outside Walter Reed when “hundreds” of pies were delivered to Trump supporters late Sunday.

“I heard someone say they all had meat on them; Trump must have sent them,” he said with a laugh.

“We have to live with it now,” he added. “I don’t see why we don’t just approach it with a dose of logic.”

Health experts are expressing concern that a spike in coronavirus cases this fall and winter will strain the health care system and lead to more deaths. The president’s mixed messaging has been criticized by Gov. Lawrence J. Hogan Jr. (R), Dr. Anthony Fauci and many others.

But Gasper, wearing a T-shirt with a cartoon rendering of U.S. Rep. Adam Schiff (D-Calif.) with a clown nose, shrugged off the suggestion that greater vigilance on masks and distancing would reduce the spread of the virus.

“I’m not downplaying anything,” Gasper insisted. “But let’s just stick with the reality of the facts of the matter. Really.”