Almost 10% of Marylanders live on incomes below the federal poverty level, and a disproportionate number of them are African American, according to a recent report on individuals who rely on public benefits to make ends meet.

The United Ways of Maryland published a 182-page report on the impacts of the loss of public benefits for working families when they achieve small increases in their income, or what is known as a “benefits cliff.” Someone could work extra hours and receive more income, but simultaneously lose hundreds of dollars in lost benefits, such as for food stamps and medical assistance.

Almost 15% of Marylanders received food assistance in 2018. Although African-Americans make up 30% of Maryland’s population, they represent 43% of the population with incomes below the federal poverty level, according to the report.

Even with an increase of Maryland’s minimum wage to $11 per hour earlier this year, two parents who work full time minimum-wage jobs only see a net increase of $320 per month because their eligibility for benefits decreases as earned income increases. And single parents with two children can meet their basic needs only if they also receive public assistance with housing and health insurance, according to the report. 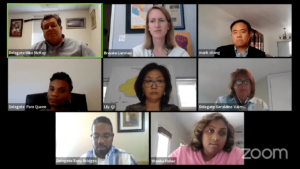 It is like taking one step forward with the increase in earned income, but taking two steps backwards because of the sudden loss of benefits, Del. Pamela E. Queen (D-Montgomery) told state officials in a House Study Group on Economic Stability briefing Wednesday afternoon. When this happens, working families are not incentivized to make more money.

The study group was formed by the late Speaker of the House Michael E. Busch (D-Anne Arundel) in January 2019 to focus on strengthening the middle class and improving the economic stability of those who are not consistently eligible for social safety net programs.

In the last year, the study group sponsored a bill that reestablished the Two-Generation Family Economic Security Commission, which investigates opportunities that would help alleviate multigenerational poverty in Maryland.

More than one in three working households in Maryland cannot afford basic expenses such as food, housing and healthcare, according to the report. The United Way and many lawmakers refer to these families as ALICE (Asset Limited, Income Constrained, Employed) households.

And the number of struggling families has only been exacerbated by the COVID-19 pandemic, according to the report.

Undocumented parents do not have access to unemployment benefits during normal circumstances, but that should be reconsidered during a state of emergency, said Wanika B. Fisher (D-Prince George’s). “The reality is these children are a part of our school systems and there are mouths to be fed and we are in a global pandemic,” she said.

The report’s policy recommendations included establishing a gradual phase-out of benefits, so as “not to just drop people abruptly once they start to earn more money,” Queen said. School-based health centers, which provide affordable and comprehensive health care to students in underserved communities, should be expanded to all 24 jurisdictions in Maryland, according to the report. Such programs currently operate in 11 counties and the city of Baltimore.

Valentino-Smith described the one hour briefing as a “belly barometer” of what vulnerable individuals are experiencing across the state. But looking forward, it is going to be “really, really important that we understand the data and the specifics for some of this. And as legislators, the only way we are going to be able to drive policy and budget priorities is if we know…where and how things are being impacted,” she said. Data on unemployment by jurisdiction, as well as where and how many eviction notices have been filed will be critical in understanding the extent of the problem, she said.

For the first time in more than a decade, two long-time elected officials in Prince George’s County aren’t on the ballot — but that…

People of color make up 43% of Maryland’s Court of Appeals, which is the state’s highest court, while 57% of the justices are women.