One year after a Chesapeake Bay Bridge construction project caused friction between Eastern Shore leaders and the state, a new controversy has flared. The issue: temporary metal plates on the westbound span that critics contend are responsible for long backups across Queen Anne’s County.

The four-foot wide metal plates, in the span’s center and left lanes, are installed at daybreak to cover deteriorating expansion joints that are being repaired by crews that work at night.

State transportation officials insist the plates are low enough for motorists to travel over them safely at posted speeds. But some local leaders say they are leading to lengthy backups. 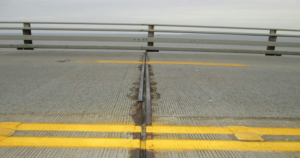 “It’s all because [drivers] get up to those steel plates and they want to go over them slow,” said Queen Anne’s County Commission President James J. Moran (R). “It’s a problem, and the state knows it.”

Even though beach season is largely over, Moran said the last few Sundays have produced long backups that have snarled local travel and impeded rescue crews. He said weekday morning backups are common as well.

He has pressed Transportation Secretary Greg Slater and others to use more tapered plates, so motorists won’t feel compelled to slow down.

“If it’s a two-year project, you’ve got the money,” Moran said. “Manufacture the steel plates with the bevels bigger. See if that helps out. We’ve gotten no response on that whatsoever.”

The Maryland Transportation Authority, which owns the bridge, insists the plates are low enough to traverse without slowing.

“The steel plates include a taper down to ¼ inch thickness on both sides of the plates to make the transition smoother when crossing at posted speeds,” the MdTA says on its website.

“While some motorists may choose to slow down when traveling over the plates, using steel plates to complete this crucial work greatly reduces impacts to the public such as those experienced during the 24/7 westbound right lane closure that reopened to traffic on April 1.”

“We’ve done various patches and holding actions to these [joints] over the years, but it’s time,” he said. “We need to do this to keep the Bay Bridge safe.”

Pines said there is no way to reduce the height of the plates and still protect motorists from holes and rough pavement. “We’ve looked into it a lot, and there’s no commercially available product that has a smaller step-up than that one-quarter inch.” 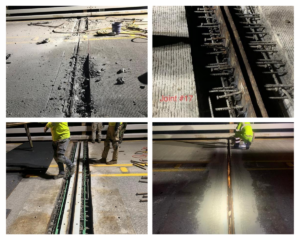 John B. Townsend II, head of governmental affairs at AAA Mid-Atlantic, said anxiety about traveling over the bridge leads motorists to slow more than they need to when they encounter the metal plates.

“It can be disconcerting,” he said. “It’s one of the longest spans in the country. It can be frightening to some people.”

Townsend said weekend morning and summer Sunday backups on the bridge are largely a function of the number of vehicles that use it. “It’s overly congested. Everybody knows that.”

MdTA executive director James F. Ports Jr. said the agency has had many discussions with local officials about the project.

“You’ve got tractor-trailers going over it, and if it was much thinner, it would break and cause a problem,” he said. “We’ve explained all this to Jim Moran and I’m shocked that he’s still asking questions about it. He’s a concrete contractor. He should understand how concrete works.”

Pines said there are 22 joints that need to be repaired. Work has finished on nine of them. He said crews will work until winter weather sets in, then resume repairs next year. The project is expected to conclude next fall.

Moran said “it drives me nuts” that the state can’t move the work along more quickly.

In an interview, Moran said there is less attention paid to traffic woes that harm quality of life and public safety east of the bridge.

“Could you imagine in the last two out of three Sundays or Fridays, if there was a 10-mile backup on the Anne Arundel County side, you’d have [Comptroller] Peter Franchot and everybody else screaming and yelling,” he said. “But you don’t hear a peep about it when it’s Queen Anne’s County.”

He said Eastern Shore communities won’t get relief from traffic until a third span is built. He agrees with Gov. Lawrence J. Hogan Jr. (R) that an additional span should be located adjacent to the two existing bridges. 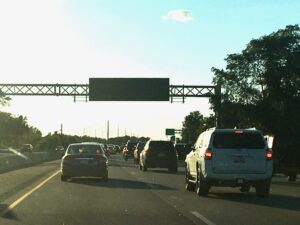 Cars were backed up miles at the Bay Bridge as the sun set on Sunday. Photo by Bruce DePuyt.

Moran would like the state to impose a $10 toll on motorists who use the westbound span on Sundays between 10 a.m. and 8 p.m. He said that toll would raise $1.5 million a month, money that could be used to advance an environmental study that is required by federal law.

“That’s another four years and another $30-$35 million, and I don’t want the excuse that we don’t have the money,” he said. “I’m giving you the funding source.”

Moran said if motorists opt not to travel on Sundays to avoid the toll, so much the better. He is well aware that Hogan, a fellow Republican, is highly unlikely to support his proposal.

Ports, a former GOP state delegate, noted that there is no toll gantry on the westbound span. Constructing one would take time and money, he said. He also said a new toll would be a hardship for low-wage workers and others who cross the span on a regular basis.

“From our traffic engineers, it would probably have to be a higher toll than $10 to change people’s behavior,” he said. “I don’t know how he would accomplish what he’s trying to accomplish.”