America, my country ’tis of thee, has been and will always be, personally and collectively as a Black American, a place not only where I and at least four generations of ancestors that I can trace are born, but more importantly where we are part of the us in the United States of America.

Like, in any large family, America has its dysfunction, disagreements, differences and disputes. As a member of this multifaceted family, I, too, sing America. As history has proven and I have come to expect that at times of national crisis, Americans unite — for many one, one nation, one flag and one democracy.

In my lifetime, 9/11 is one of those unifying events in which Americans coalesced in the aftermath of a horrendous attack on U.S. soil, an assault intended to abolish three defining American pillars – our financial strength, military might and government structure. It’s an indelible moment in which you remember where you were when planes torpedoed the World Trade Center North and South Towers, penetrated the Pentagon and crashed due to American bravery in Shanksville, Pa., en route to demolish our seat of government.

On a day of national unity, at a local 9/11 candlelight vigil in Olney, I am still perplexed to have observed at this solemn remembrance of the heroism of first responders and fallen innocent Americans, a Blue Lives Matter flag. A symbol inferred to “white-out” or rather “blue-out,” our often disconcerting, disheartening and disenfranchising, but interwoven American stories of our darker brothers.

Don’t they know that 34% of police in the U.S. are non-whites — with the largest percentage being Blacks? Are they part of the us in the USA? Can these Blacks sing America? 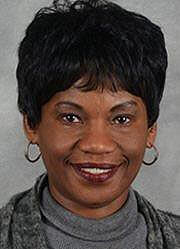 Don’t they know, Crispus Attucks, a Black man was the first person killed in our Revolutionary War — and that Blacks ever since have served in our military despite being unwelcomed and demoralized by menial assignments? As my grandfather, a World War II veteran in our segregated Navy wanting to fight in service to our country, was at a debasing disappointment relegated to “women’s work.”

Don’t they know that 40% of active military are non-whites — with the largest percentage being Blacks? As in other U.S. wars, Blacks serve with valor, including our War on Terrorism. Are they part of the us in the USA? Can these Blacks sing America?

As was our routine, it was a Tuesday at o-dark thirty when my husband, dressed in his naval service khaki uniform, gently awakened me before he left for his weekday trek to the Pentagon. Little did I know I would come to cherish his blissful continence on that morning, a peaceful tranquility that I would never again perceive.

When first responders showed up at horrific scenes in New York City, Arlington, Va., and Shanksville, they didn’t ask whether distraught Americans were Black or white, born or naturalized citizens, Democrats or Republicans, gay or straight, or those who kneel in praise or kneel in protest. No, these first responders all dutifully came to serve and save lives.

On that day, we personally and collectively shared anger, fear and horror that no human should ever witness or endure. Watching footage from New York City in which humans trapped in the towers chose a plunging death says it all. Every day after 9/11, for months, when my husband returned to work at the Pentagon, it was Old Glory – the Red, White and Blue draped over a gaping chasm in the Pentagon, as a symbol for the world to behold that we are one nation, one flag and one democracy. A unity that foreign terrorists could not breach.

Whether you came to this land of liberty by choice on the Mayflower or by chains on the Clotilda, we are one family, all Americans. Throughout the years, my ancestors have lifted their voices above discord, disharmony and dissonance to sing of hopes and dreams, of an America where its promise is shared by all.

Because of them, I, too, sing America — one nation, one flag and one democracy.

The writer is a Democrat representing Montgomery County’s District 14. She serves on the House Economic Matters Committee.