In dramatic fashion, the presiding officers of the Maryland General Assembly slammed the door Wednesday night on holding a special legislative session this fall.

House Speaker Adrienne A. Jones (D-Baltimore County) and Senate President Bill Ferguson (D-Baltimore City) turned up unannounced at a mock special legislative session organized by progressive groups in Annapolis on Wednesday evening and formally signaled their reluctance to convene before the 2021 session is set to begin in January.

Despite hearing entreaties from a crowd of 200 people that the myriad challenges facing the state demand swift legislative action, Ferguson and Jones said they needed more time to carefully craft legislation that meets the historic demands of the moment. 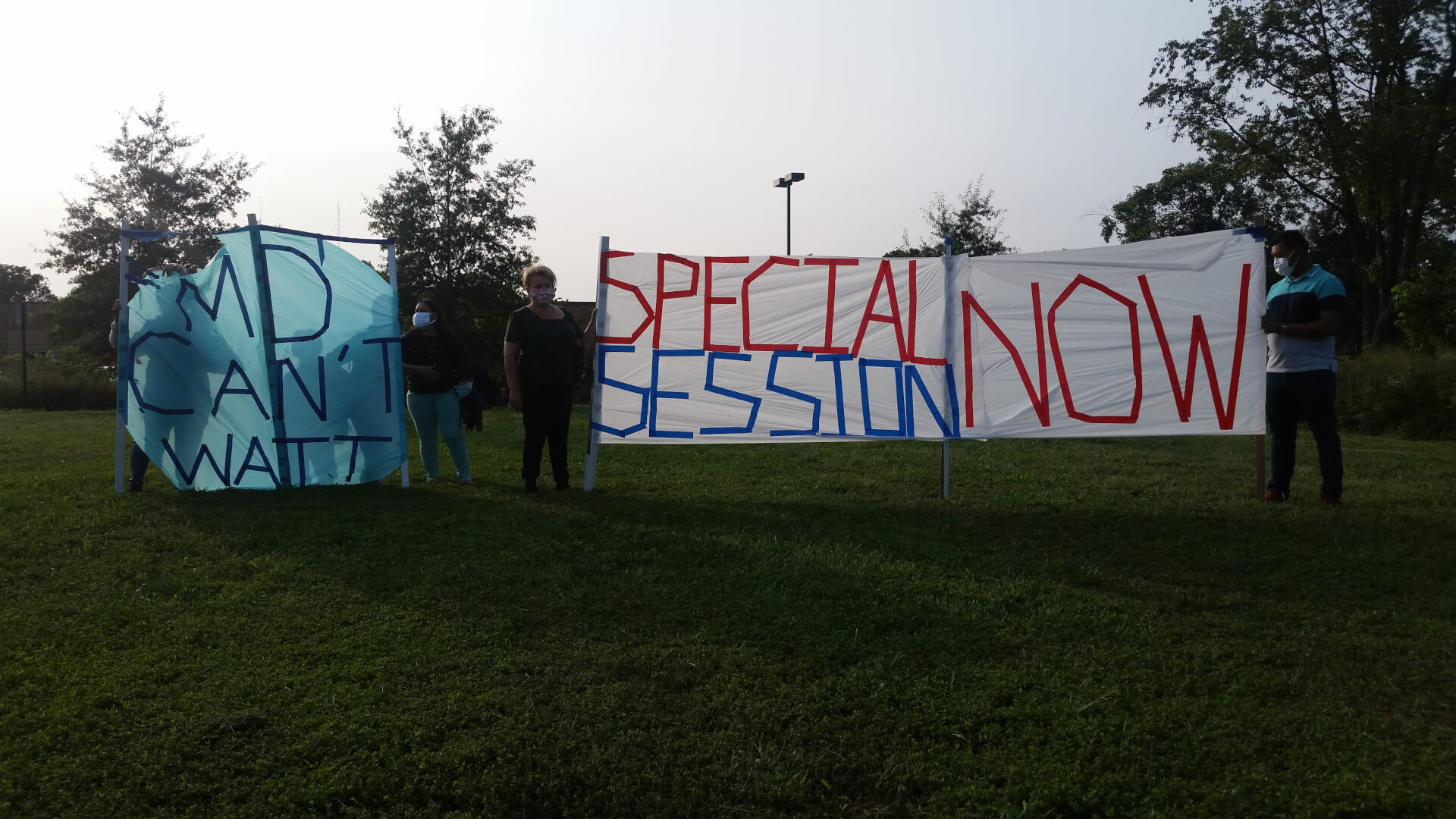 “These questions are too big, they’re too important, and we must get them right,” Ferguson said. “We don’t have the ability to guess. This is a consequential, generational moment, and we have to get it right. …The reason we aren’t having a special session is, we need to do the work.”

The mock legislative session, held on an athletic field of the Phoenix Academy near the Navy Marine Corps Stadium in Annapolis, was meant to spotlight the urgency of having a special session and the practicalities of staging one in a venue other than the historic State House.

“It’s going to be a beautiful evening for democracy and economic justice,” said Larry Stafford, executive director of Progressive Maryland, one of the groups that organized the mock legislative session along with CASA, Jews United for Justice, 1199SEIU, Our Revolution, Maryland Center for Economic Policy, and the Maryland Legislative Coalition.

The evening got off to a less than auspicious start when Annapolis police informed the organizers that they did not have a permit to meet in the field where they had set up. So before the proceedings began, dozens of activists dragged chairs to an adjacent field.

Ferguson, Jones and a retinue of aides turned up moments later. Because everyone was masked, it took the crowd a few minutes to realize who it was circulating among them, offering greetings and thanking them for their advocacy.

Organizers decided to begin the proceedings as they had planned, with a mock override of Republican Gov. Lawrence J. Hogan’s veto of a bill that would provide over $500 million in additional funding to the state’s historically Black colleges and universities.

“We’re going to show you, Madame Speaker and Mr. President, how we can do this safely and effectively,” said Tamara Davis Brown, a community activist from Prince George’s County. 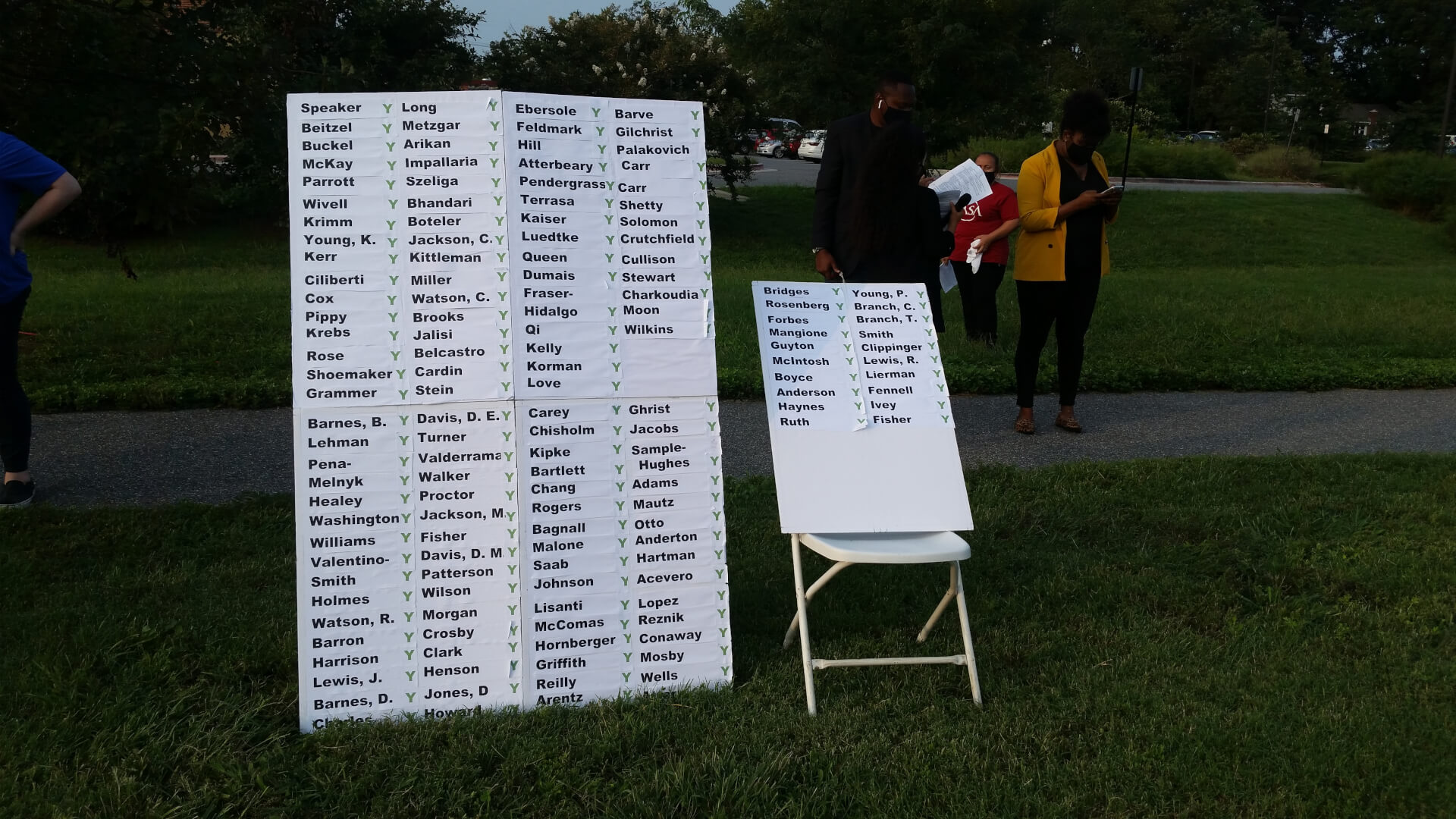 The assembled activists registered their views by raising green placards in the air, meant to signify a symbolic “yay” vote to the veto’s override, as a handmade scoreboard from the House of Delegates stood in a corner. The crowd then heard from speakers about the necessity of freezing rents and stopping evictions in the state, demanding legislative action.

Buttressing their arguments was a new analysis from the Maryland chapter of the ACLU, suggesting that the legislature has wide latitude to meet whenever ― and wherever ― it chooses. 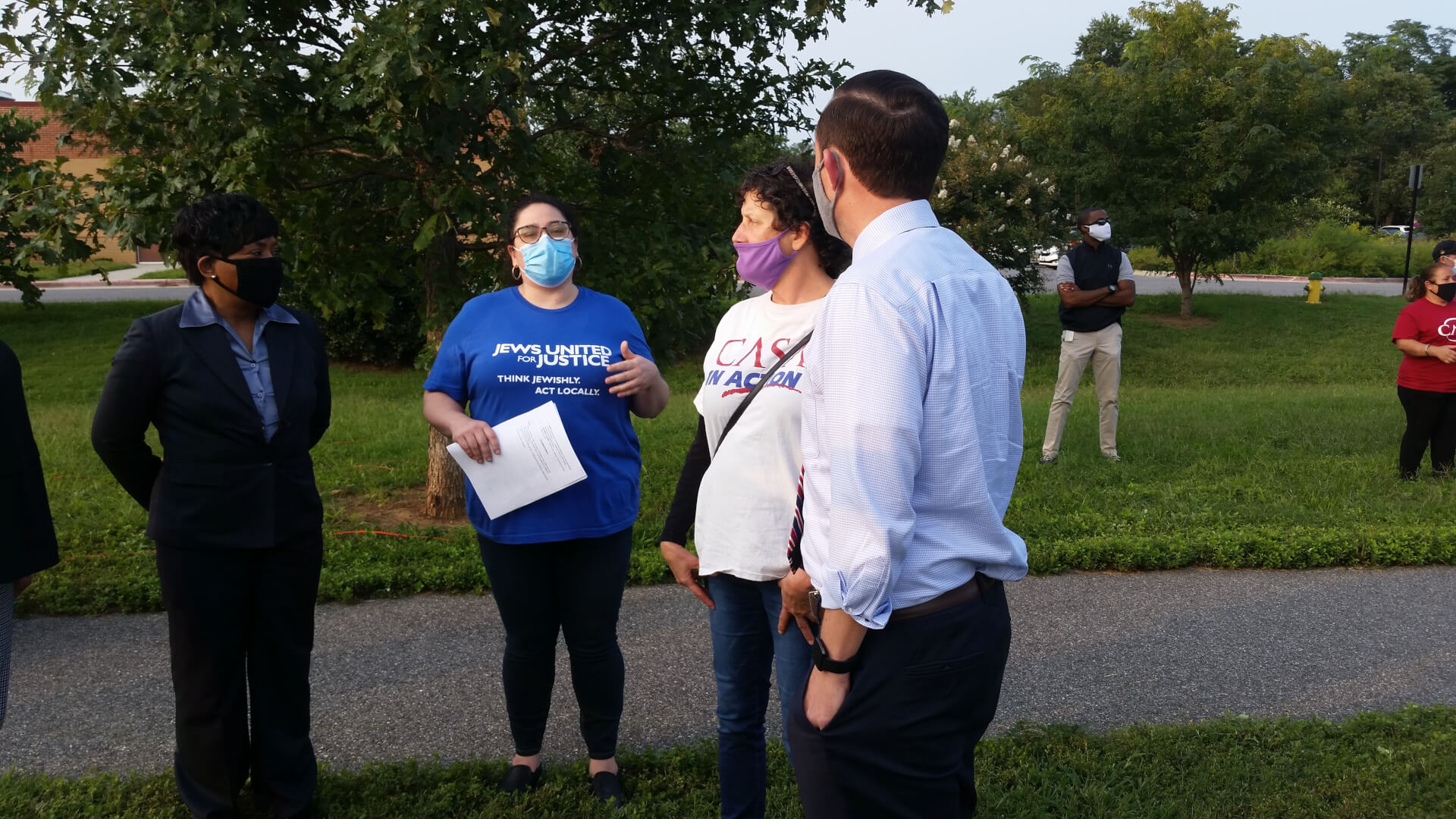 While these speeches were taking place, the mock session organizers were involved in intricate negotiations with the presiding officers and their staffers over how and when Jones and Ferguson would address the crowd.

“First, we want you to have a chance to hear the people speak at the people’s General Assembly,” Stafford told the legislative leaders.

When it came time for the presiding officers to speak, both thanked the activists there for their passion and work and vowed to pass legislation designed to address economic and racial inequality, police brutality, the public health crisis, workers’ rights, housing insecurity, and many other issues.

Ferguson argued that one of the things motivating legislative leaders to wait to act until the regular January session was uncertainty over how the November elections would turn out.

“These two different realities have unbelievable impacts on what we’re able to do in the state of Maryland,” he said.

Jones sought to make a connection with the crowd by explaining that one of her sons and one of her brothers were HBCU graduates ― and that she is the chief architect of the funding bill that Hogan vetoed. She also assured the crowd that contrary to what some of the speakers said, the legislature had been working to address the challenges caused by the COVID-19 pandemic since the General Assembly adjourned three weeks early in March.

“I don’t want you to think things aren’t being done, that we don’t care,” Jones said. “It was a little hurtful.”

But while asserting that they are in alignment with the activists on most issues, the presiding officers also made it plain that a special session is not in their plans.

The crowd listened respectfully to Ferguson but grew restive when Jones spoke. The event then morphed into a town hall-style meeting as Jones and Ferguson took questions from the crowd ― some delivered politely, others less so.

What emerged from the gathering is that many of the activists appreciated the presiding officers’ presence, and they considered the drop-in a sign of their political influence.

After Jones and Ferguson departed, two other lawmakers spoke ― freshman Dels. Julian Ivey (D-Prince George’s) and Gabriel Acevero (D-Montgomery), who have been pushing for a special session.

“Nothing good comes out of spaces of power and state capitols until people organize,” Acevero said. “Everything’s impossible until it’s done. We’re looking around at other state legislatures and see they’re getting it done.”

Ivey, who has been spotlighting Black victims of police brutality in his daily appeals to convene a special session, appeared to express disappointment at what he heard from Ferguson and Jones.

“We’re giving you excuses for why we’re not doing our jobs,” he said.

Stafford said volunteers would begin calling voters in Jones’ and Ferguson’s districts next week in an effort to change the presiding officers’ minds on scheduling a special session.

“We clearly still have work to do,” he said.