The Hilton Hotel on Rockville Pike, one of the biggest in all of Maryland, is like a ghost town.

Shuffle through the empty lobby. Shake off your umbrella. Follow signs that take you through the maze of dark hallways to a wing with a series of conference rooms.

You won’t find a beehive of activity exactly, but you will come across a handful of well-dressed people, looking a little like survivors, wearing masks and grateful to see you.

This is the beginning of Thursday’s nine-hour public hearing on the Maryland Department of Transportation’s 18,000-page Draft Environmental Impact Statement (DEIS) analyzing the Hogan administration’s plans to widen the Capital Beltway and Interstate 270.

A conference room that would fit 200 people now has 15 or 20, and a few minutes after noon, the hearing formally begins. An array of five state and federal officials sit at the front of the room, appropriately socially distanced, also wearing masks. They do not speak for the entire proceeding.

Rockville Mayor Bridget Donnell Newton kicks off the hearing, testifying that her city of 70,000 is opposed to the highway widening plan and its reported $9 billion price tag and is worried about hidden costs and hidden consequences. She’s an elected official, so is offered five minutes to speak. Lesser mortals only get three minutes. 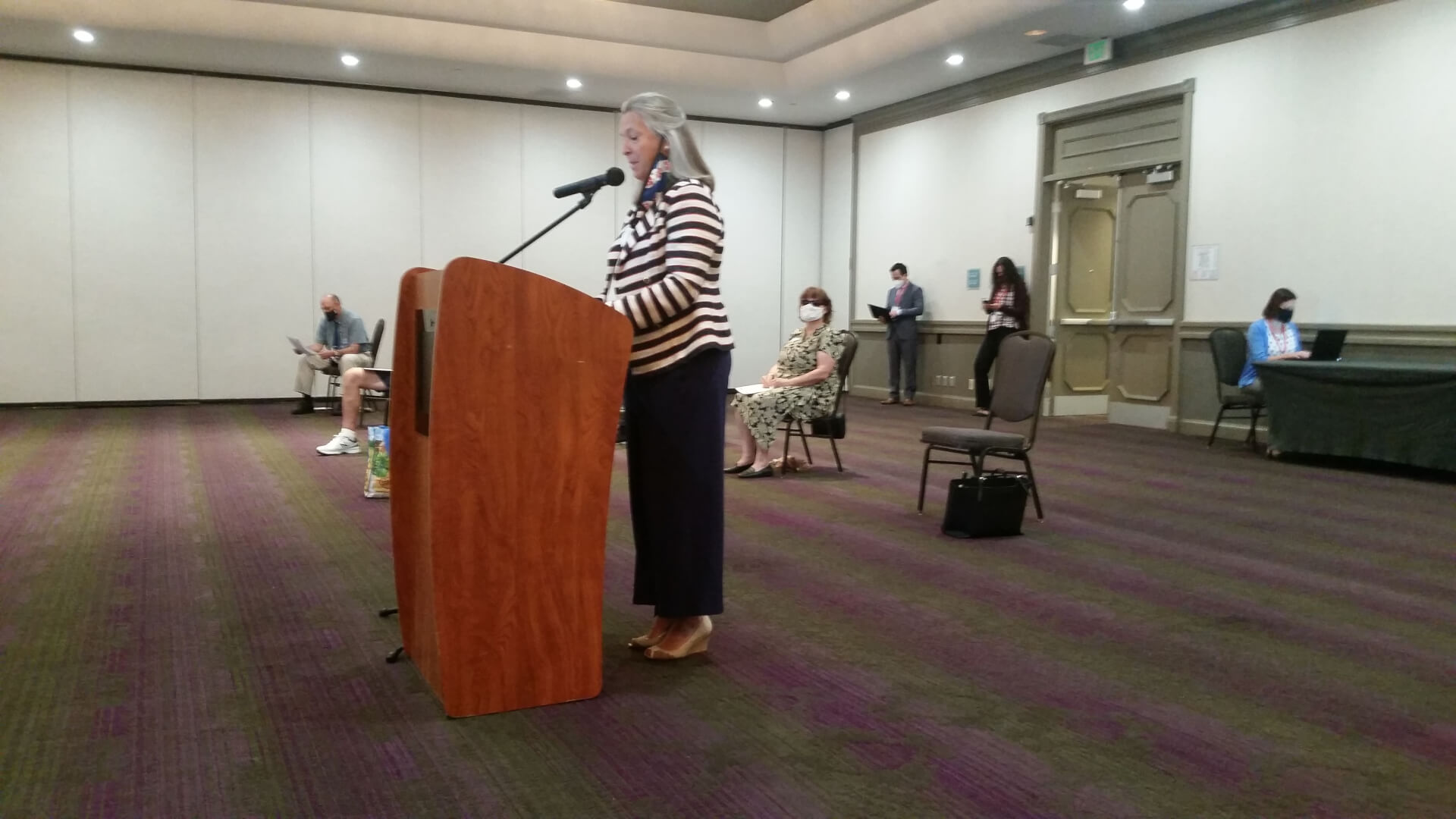 In the first 2 1/2 half hours of the hearing, only six people testify — and their message is stark and familiar. The project isn’t necessary. It isn’t clear that it will solve any of the region’s traffic problems. No one knows how much it will truly cost and no one is prepared to say how much the express toll lanes, which the Hogan administration envisions will eventually fund the project, will cost commuters.

Some of the language is provocative.

“I’m going to get right to the point: This process is rigged to justify a toll lane contract for a favored bidder, Transurban,” says Benjamin Ross, representing the Maryland Transit Opportunities Coalition. “Both the process and its pre-determined result are fatally flawed.”

Sally Stolz, co-coordinator of the group Don’tWiden270.org, also uses the term “fatally flawed,” and says the proposed highway-widening is an outdated solution to a problem that has been minimized considerably — and possibly permanently — by the COVID-19 pandemic.

“We have conquered our congestion through telework, and there is no going back,” she says.

“A rain storm and a pandemic is a recipe for small turnout,” says Terry Owens, an MDOT spokesman.

But 13 is an improvement over the one in Prince George’s County on Sept. 1, another rainy day, where just five people showed up to speak. There have also been four online hearings — and the government agencies are taking public comments through early November. 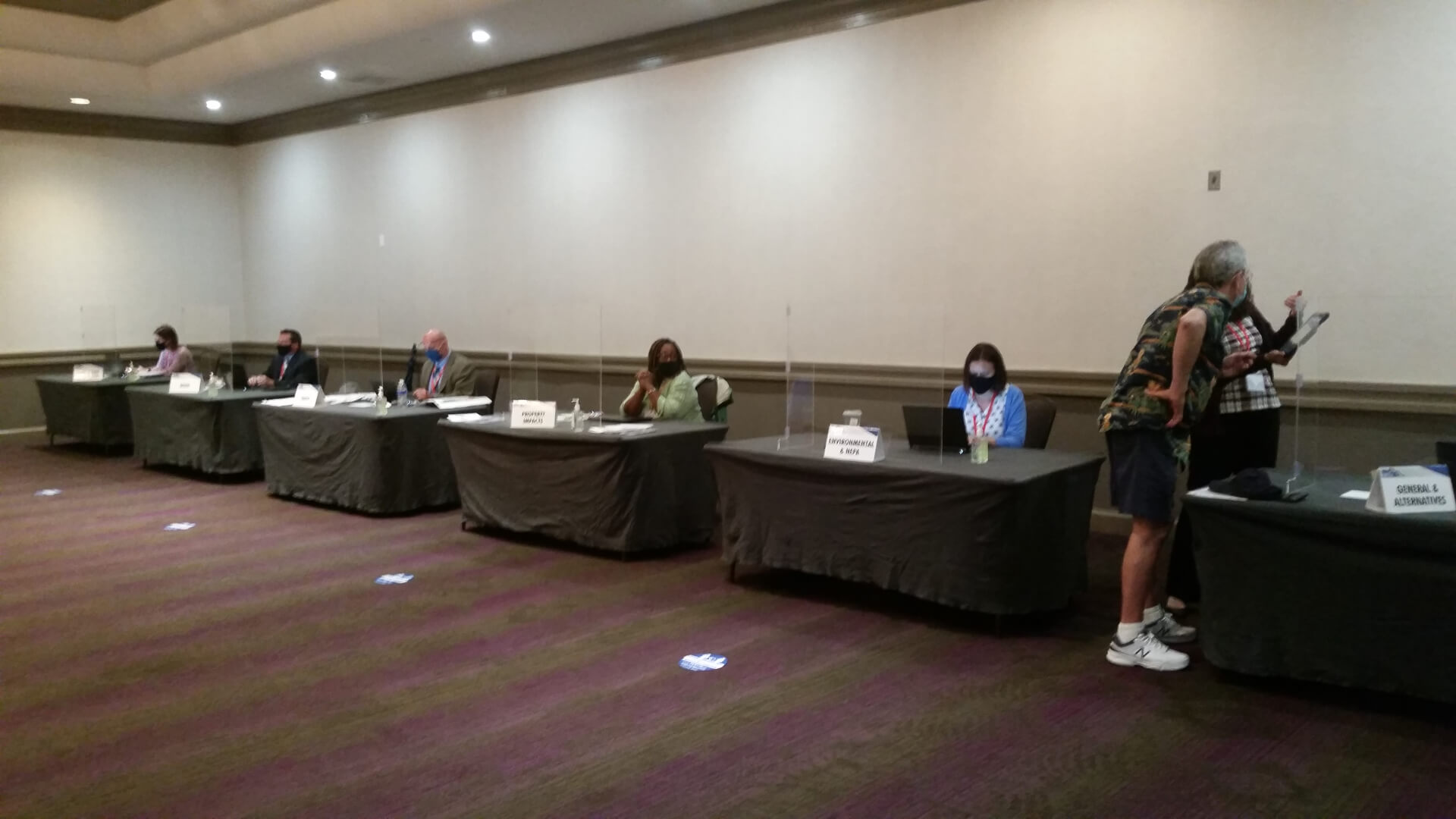 A team of transportation policy experts was on hand to answer questions from the public. But it was a fairly quiet day. Photo by Josh Kurtz

In an adjoining room at the Hilton, six policy experts sit at tables protected by plastic shields. They are on hand to answer technical questions about the project, broken down into the following categories: “general and alternatives,” “environmental and NEPA,” “property impacts,” “traffic,” “noise,” and “joint permit application.” The room is almost always empty.

‘This is what is giving us nightmares’

There is a predictable rhythm to the debates over big road projects in Montgomery County. The arguments for and against haven’t changed much over the decades.

But sometimes, out of the blue, the major projects attract dreamers and gadflies, pitching big ideas.

When Maryland officials were first contemplating the Purple Line in a serious way two decades ago, one man would show up at several public meetings insisting that the best alignment for the light rail line would be along an extended right-of-way for Pepco’s electric power lines in Prince George’s County. His theory was that the land was already set aside for official use and building a rail line there would not disrupt commercial or residential areas. The idea never came to fruition, but it had a certain logic.

On Thursday, a retiree from Kensington named Nino R. Vaghi showed up at the hearing to express his opposition to widening the Beltway and I-270. Vaghi’s remarks were in line with the other opponents’.

But after the formal portion of his testimony, he had something else to peddle – specifically, a plan to ease traffic congestion by extending five Metro lines and building giant multi-tiered garages near the new stations.

Vaghi’s plan — which he has patented — is called “Park n’ Rail.” He envisions extending the Metro Red Line to the intersection of I-270 and Sam Eig Highway and putting a huge garage there. Similarly, he would like to see Metro lines extended to Bowie, where another major garage could be built along Interstate 50; along I-95 and the Intercounty Connector highway in Laurel; along I-95 in Lorton, Va.; and near the intersection of I-66 and U.S. 50 in Virginia. Each location would get a multi-level building that is part parking garage, part commercial space.

“This is a solution to our problem,” Vaghi said in an interview.

He said he chose these particular locations because they are major and consistent traffic choke points during rush hours in the Washington, D.C., region.

“These are the culprits of today’s traffic. This is what’s giving us nightmares.”

Vaghi, a retired office products salesman, said he first hit upon the idea while he was stuck in traffic in 2002. “I had so much time to think, I thought, ‘how do you fix this?'” he recalled.

Since he retired two years ago, he’s had more time to refine the proposal.

Armed with a map of the region and sketches showing what the garages would look like, Vaghi described them as “gathering places,” and said large garages can be engineered in such a way that vehicles can move in and out of them very quickly. Commuters would rent parking spaces on a long-term basis — or purchase them outright.

Vaghi is convinced that the project will pay for itself, and argued that the construction of the garages would take far less time and create far less traffic than Beltway widening would necessitate.

Long-term, he says the park and rail idea will dramatically reduce traffic congestion and carbon emissions.

“When I tell people I have a solution for fixing the traffic, they think I’m nuts,” Vaghi concedes.

But when the COVID-19 public health emergency ends, he plans to circulate his plan more widely. He’s fond of a quote attributed to Elon Musk (Vaghi owns a Tesla): “Either we try something new or we will be stuck in traffic hell for the rest of our lives.”