Democrats in Maryland’s congressional delegation reacted with cautious optimism to Tuesday’s news that embattled Postmaster General Louis DeJoy intends to reverse policies that vaulted him into the center of a national uproar.

Rep. David J. Trone (D-Md.), who did not attend the media event, called for DeJoy to resign on Tuesday morning.

Despite DeJoy’s about-face, legislators went ahead with their news conference — slamming him, the Postal System’s Board of Governors and President Trump over policy changes widely blamed for delays in mail delivery. The slowdown triggered a coast-to-coast furor that showed no signs of abating.

Through leaked internal memos and other means, lawmakers and the public have learned that DeJoy ordered postal carriers to leave mail behind, something that goes against their training and practice. He also ordered the removal of mail boxes and sorting equipment, and the elimination of overtime for postal workers.

Lawmakers said DeJoy’s actions, combined with the president’s attacks on voting by mail, made it clear that recent USPS policy shifts were intended to create havoc in the weeks before an election that is likely to see unprecedented use of balloting by mail.

Hoyer called the actions “reprehensible” and “quite probably criminal.” He quoted U.S. code that makes it a crime to “unlawfully delay” the mail. 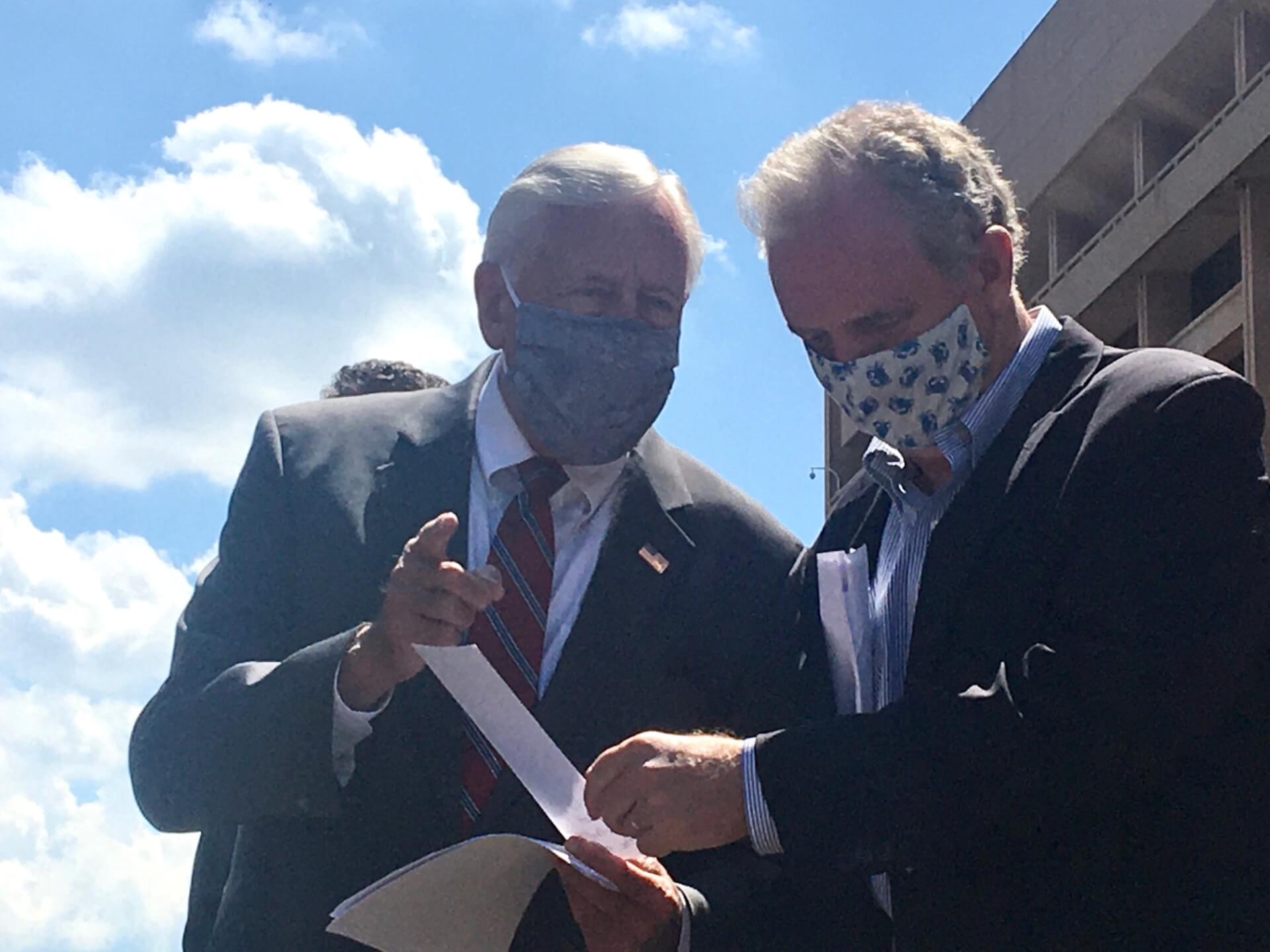 DeJoy’s announcement will reverse actions that caused undelivered mail to stack up and will return processing capabilities to Jan. 1 levels. Nevertheless, House Democrats said they will move forward with a vote, scheduled for Saturday, on a measure to mandate prior service levels and increase funding.

They urged Senate Majority Leader Mitch McConnell (R-Ky.) to bring his chamber back to Washington and approve the measure as well.

“I was very proud to get this job because I felt it was an essential job that connected the whole United States together,” said Taylor, who recently retired.

“As letter carriers, we always felt if we left something behind us that day, it felt really bad. We all wanted to take every piece of mail behind us every single day,” she added. “That’s no longer the case.”

Lawmakers said they have been inundated with complaints from constituents whose mail is taking longer to arrive than before DeJoy imposed policy changes on the agency.

Rep. Anthony G. Brown said many of those who are suffering the most are veterans forced to wait for medications to arrive.

Like Trone, he called on DeJoy to resign, saying the businessman-turned-postal chief, a former Trump campaign donor, “is putting our democracy and the health of our citizens at dire risk.”

DeJoy, whose homes in D.C. and North Carolina have drawn protesters, is scheduled to testify before a U.S. Senate committee on Friday and a House committee on Monday.

Trone accused the postal chief of trying to “dismantle” an agency whose roots date back to 1775.

“These outrageous attacks are putting American lives, businesses, and our democracy at stake,” he said in a statement. “We need to act quickly to restore the U.S Postal Service to its full capacity to ensure that all Americans receive their mail, medication, and benefits on-time. Our democracy depends on it.”

Prior to Tuesday’s reversal, DeJoy defended his policies, saying they were needed to reduce expenses. The agency said Tuesday he will will defer further actions until next year.

“It is unlawful to interfere with the post office in order to try to cook and fix and disrupt a United States election, which is what this postmaster general was doing, on the orders of Donald Trump, who told the country, on national TV and via Twitter, that he’s interfering with the Post Office because he doesn’t like mail-in ballots,” Van Hollen said.

Pointing at the upper floors of postal service headquarters at L’Enfant Plaza moments after the news broke, Van Hollen declared, “They got caught red-handed.”

He read a letter from a Silver Spring retirement community resident whose medication just ran out. The box containing the refill has been in a postal warehouse in Gaithersburg since Aug. 5, her letter said.

Hoyer said that rural residents are most dependent on U.S. mail delivery because they are more likely to live far from stores and banks.

U.S. Rep. Andrew P. Harris, the lone Republican in Maryland’s congressional delegation who represents the largely rural Eastern Shore, has not directly addressed the complaints about DeJoy. But on WBAL Radio Tuesday, Harris dismissed charges that Trump and DeJoy were attempting to undercut mail-in balloting, calling that “a conspiracy theory.”

He repeated unsubstantiated claims about vote-by-mail, telling the station that “universally mailing ballots has been shown in many areas of the country to result in people who aren’t qualified to have ballots getting them and in some cases people who are qualified not getting them.