Our democracy and our values as a nation are under attack. That is not hyperbole. It is a fact.

The president of the United States doesn’t even bother to hide his attempts to divide the nation and disrupt the electoral process anymore. Nope. He does it right in front of us on Twitter and during his rambling bogus press conferences (aka campaign rallies) each and every day. As Joe Biden has stated repeatedly, this election will be a battle for the soul of our nation. Can I get an amen?

Just think about it: in 1968 Alabama Gov. George Wallace ran

for president on a third party ticket and received 10 million votes, carried five states, and collected 46 electoral votes. Four years later, the former Alabama governor actually won the Democratic presidential primary in my home state of Maryland. His obituary described his campaigns as ones that “vilified blacks, students and people who called for an end to the Vietnam War.” While there is no doubt that President Trump found that intriguing, it was the year 1966 that really tickled his fancy.

That fall a perennial Democratic candidate who had lost not one, not two, but six previous elections finally cashed the golden ticket by campaigning on one simple idea while running for governor of Maryland: “Your home is your castle; protect it.” In a divided field, George P. Mahoney won the Democratic primary with 30.2% of the vote. (Keep that 30% in mind because we will come back to it later.)

Now by his own admission, the president doesn’t read, so we will assume that Stephen Miller unearthed this historical nugget along the way, summarized it on an index card with two or three bullet points, and interrupted the president in mid-tweet to share. You can almost hear The Donald saying, “Wow Stephen, this is great. I love it, and the base will eat it up. Let’s tweet some stuff for suburban housewives to see if we can’t scare them to death.”

Keeping Blacks out of the suburbs, now that’s an idea that 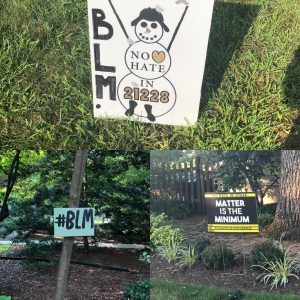 Donald J. Trump can get behind. I guess the president doesn’t walk the same suburban streets that I do that are covered with and “Black Lives Matter” and even “Matters is the Minimum” signs.

Of course what the president also misses is what Paul Harvey used to call “the rest of the story.” Mahoney’s racially divisive message failed to resonate with a broader electorate, and as a

Remember the 30% of the voters who responded to Mahoney’s blatantly racist campaign that allowed him to win the Democratic primary? They were loud, they had great yard signs and they lost. When the general election rolled around, the “keep the Blacks out” team managed to recruit just an additional 10% of the vote to jump onboard the racist train. Mahoney finished a distant second with 41% of the final vote tally.

And that’s the message of hope. That is pretty much where Donald Trump’s support has remained since the day he was elected.

Without a doubt there has been, and unfortunately still is, a racist underbelly in our nation. As historians point out, at the beginning of the hearings that would eventually disgrace U.S. Sen. Joe McCarthy in

1954, 32% of the public supported his anti-communist purge. He and his buddy Roy Cohn (yes, the president’s Roy Cohn) mastered “lock ’em up” long before Donald Trump took it out of mothballs.

At the conclusion of the hearings and after the senator had been disgraced, censored and debunked, 32% still supported his horrific agenda. Facts did not matter. He was their guy, and their guy hated the people they hated. Can you say tea party? Can you say QAnon?

That 32% is still there, and they aren’t going anywhere. I won’t begin to play Dr. Phil and tell you why. They go to bed angry and wake up angry each and every day. I will allow the experts to analyze that psychological condition. But it is very hard for any candidate, even the master of reality television, to grow that base to an electoral majority, especially when the act gets stale.

Remember, “The Apprentice” got canceled, and even Fonzie jumped the shark. I know that. You know that. And Donald Trump knows that. He cannot win a fair election with a message of hate and division. Which brings us to voter suppression and an unprecedented attack on the United States Postal Service, but that’s a topic for another day.

The writer is the former Baltimore County executive. He can be reached at [email protected]