The deadly pandemic, climate catastrophe and growing economic recession have starkly and tragically laid bare our societal vulnerabilities and racial disparities. Our nation and the state of Maryland have already endured staggering suffering and losses.

As we move forward, there are actions we can take to put our state on the road to a just recovery — both immediately and as part of a long-term strategy that addresses all three of these interrelated challenges.

What does COVID-19 have to do with climate change? The same fossil fuels accelerating the climate crisis — coal, gasoline and fracked gas — are making the coronavirus much deadlier. Harvard researchers found that air pollution increases coronavirus mortality in the United States.

Scientists also believe it is the reason why Northern Italy’s COVID-19 death rate reached nearly 12% while the rest of the country’s was 4.5%. A German research team says long-term exposure to nitrogen dioxide primarily from fossil fuel combustion in cars and power plants is “one of the most important contributors” to coronavirus deaths in Spain, Italy, France and Germany.

That’s sobering news, as death from air pollution itself was already on the rise in the U.S. and disproportionately affecting communities of color. In Maryland, we see racial disparities both in air pollution exposure and in COVID-19 deaths. There’s likely a large overlap between the thousands of Marylanders dying of COVID-19 and those who have been more exposed to pollutants caused by fossil fuels.

Of course, the effects of climate change in Maryland and the damage to our economy were being felt even before this pandemic.

Sometimes this happens quickly and catastrophically such as with hurricanes and extreme flash flooding in Ellicott City. “Sunny day” flooding is now commonplace in historic Annapolis and downtown Baltimore and is expected to become more frequent. Saltwater intrusion is negatively impacting prime agricultural land on the Eastern Shore, further threatening our ability to build a sustainable local food system and causing additional pollution in the Chesapeake Bay. And the extreme heat and associated health risks that come with it are also disproportionately felt in poorer urban communities, which are also predominantly communities of color. 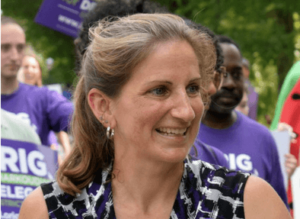 The COVID-19-created recession we find ourselves in is also affecting Marylanders of color in disproportionate ways, including significantly higher unemployment. Many of the one of every six working Marylanders who have filed for unemployment will return to their old careers after the economy fully re-opens. But many won’t, with their vulnerability increasing the longer the pandemic lasts.

We find ourselves at a critical juncture. The steps we take now will determine if we can shift away from this unsustainable and imperiling path to a healthier and more just future.

Here are some ideas for both immediate and more long-term action:

Energy Efficiency: One of the most job-intensive ways to reduce climate pollution is increasing energy efficiency. Thanks to groups like the Green and Healthy Home Initiative, weatherization and other efficiency upgrades that reduce electricity consumption and improve indoor air quality, are helping families struggling with asthma. The General Assembly set aside an additional $6.5 million in funding for low-income energy efficiency in the 2020 session.

Transportation: Huge reductions in car travel have given us the clearest skies many of us can remember. That comes as no surprise since on-road gasoline is the largest climate polluter in the state. Nonetheless, the governor is still pushing to spend billions of dollars to widen I-270 and 495. We must shift away from a future of ever-widening roads and highways to accommodate more and more fossil fuel-burning cars and trucks. Public transit provides a big job creation opportunity — for every billion dollars spent on transit, 50,000 jobs are created — in addition to connecting people to all kinds of jobs.

But the Hogan administration continues to underfund public transit — to the tune of $2 billion over 10 years — leaving much of our bus and rail system woefully inadequate and in a state of disrepair. At a minimum, the governor must fully fund the forthcoming Maryland Transit Administration regional transit plan to be released in October.

Solar: Right now, there are more than 50 large solar projects under development in Maryland, but as a result of needless foot-dragging by the state’s Power Plant Research Program (within the Department of Natural Resources), many of these projects will face delays in permitting. Gov. Hogan should ensure that these projects move through the state permitting process without delay. This could unlock an estimated 3,000 good-paying jobs at no cost to the state.

Offshore wind: Similarly, Maryland’s emerging offshore wind sector, which has the capacity to generate clean renewable energy and cut air pollution from dirty power plants, has been threatened by delays and harmful policies by the Trump administration’s Federal Energy Regulatory Commission, putting potentially as much as a third of Maryland’s future offshore wind in jeopardy.

My legislative colleagues and I have asked the Public Service Commission to adjust the offshore wind application process to work around the issue, but so far the PSC has balked. The change could help create as many as 2,000 additional jobs without costing the state a dime.

When my colleagues and I return to the legislative session, we will have many pressing needs to address. We will also have an unprecedented opportunity to prioritize a just recovery framework. Creative statutory changes, as well as strategic investment of federal stimulus funds will allow for equitable growth in public transit; energy efficiency; solar, wind, geothermal and storage; grid upgrades; and compost and recycling systems.

We will need to proceed with utmost urgency to accelerate the transition to a clean energy economy, creating green jobs with family-sustaining wages, reducing climate risks, cleaning our air and improving the public health, especially in our communities that — because of systemic racism and injustice — have been hardest hit by COVID-19, climate change and the economic downturn.

By taking determined actions today toward our long-term future, all Marylanders should be able to breathe easier.

The writer, a Democrat, represents Montgomery County’s District 20 in the Maryland General Assembly. She can be reached at [email protected].

Vincent DeMarco and allies ready their agenda for the new General Assembly.

Advocates: Costs associated with expanding offshore wind production would be more than offset by the eventual savings and environmental and public health benefits